An exhibition in Toronto shows that things haven't changed much since 100 years ago when it comes to planning large infrastructure projects. 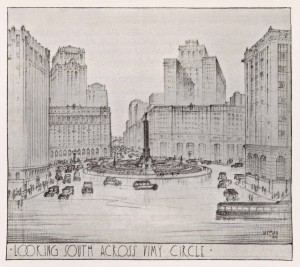 “Looking South Across Vimy Circle,” one of the unbuilt schemes in the exhibit “No Little Plans: Alternative Building and Transportation Visions for the Future,” at the City of Toronto Archives. Image from the Report of the Toronto Advisory City Planning Commission, 1929, (c) Toronto Archives.

Mark Osbaldeston is the curator of “No Little Plans: Alternative Building and Transportation Visions for Toronto,” an exhibition at the City of Toronto Archives. A lawyer, Osbaldeston is also the author of two books Unbuilt Toronto and Unbuilt Toronto 2, as well as the forthcoming Unbuilt Hamilton. CCE interviewed him in October.

Q. What surprises you most about the number of transportation schemes that were proposed and then rejected?
It’s that the issues we are grappling with now are the same issues that people have been grappling with for 100 years: surface rail vs. subways, timing, money, routes.
In those days schemes that required expenditures beyond the city council’s mandate and required borrowing had to go to a vote of the electorate. Toronto citizens voted a lot of schemes down. For example, the Prince Edward Viaduct linking Bloor Street across the Don Valley to Danforth Avenue was voted down three times before it was passed. So a transportation link that seems such a “no-brainer” for us today took four attempts to get approval. It opened in 1919 finally.

Q.  So Toronto citizens were pretty conservative and didn’t want to borrow?
Exactly. Parochialism is another factor. If you ask people whether something like a transit line should or shouldn’t be built, they naturally ask themselves, am I ever going to use it? And there were other issues that stopped schemes going ahead, like the Depression, and World War.
Q. The hand drawings are beautiful. Some show almost a completely different city to the Toronto we know.
They were from a 1929 plan by the Advisory City Planning Commission. They resurrected the idea of a grand boulevard that would have connected Union Station to what became Nathan Philip Square. The drawings are by a Toronto architect named Earl Sheppard and belong to the City Beautiful school of planning. I think that those plans resonate so much today because of the beauty of the drawings and how evocative they are.

Q. Looking at all the past proposals that came to nothing, do you have hope for the big transit plans being proposed today?
That’s part of the purpose of the exhibit and books. Sometimes people look at the plans and say, we should have done this. The opportunity has been lost.
But the opportunity hasn’t been lost because there are important decisions being made all over the city now.
Some of the unrealized schemes you lament. With some you may feel we dodged a bullet. But I think the takeaway is that it’s important to be involved in the process.

Q. Do you have views on the current debate about whether to build a subway vs. LRT to Scarborough?
To the extent I do, I’ll keep them to myself.