This project in downtown Kitchener, Ontario transformed a site at the heart of the city's downtown core from a contamination nightmare into a grand public space that will be a legacy for future reside... 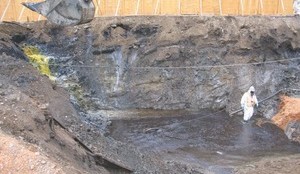 Excavating contaminated soil and groundwater at #44.

This project in downtown Kitchener, Ontario transformed a site at the heart of the city’s downtown core from a contamination nightmare into a grand public space that will be a legacy for future residents.

From 1883 until the late 1950s, the Kitchener’s utility company operated a coal gasification plant located at what is now #44 Gaukel Street, on the corner with Joseph Street. A bi-product of the operation was coal tar, a hazardous waste that was buried in tanks and forgotten.

When the environmental impacts of the former plant came to light in recent years, the city decided to “right the wrong” and remediate the problem. MTE Consultants was retained without a prescribed scope of work and helped to drive the project, identifying the challenges and leading the city and the project team to find effective solutions.

The major complexities of the $27.5-million project included not only cleaning up the coal tar contamination, but also replacing and upgrading aging infrastructure along 1.4 kilometres of roadway. The project involved creating a new streetscape and entrance into Victoria Park opposite Gaukel Street. The entrance was to provide a scenic vista towards a heritage Clock Tower in the park.

A major stressor on the project related to the financial picture and timing. Work on the #44 Gaukel site could not start until late 2006 and the remediation component had to be completed by December 2007.

Maintaining the structural integrity of existing buildings adjacent to the deep excavations for the coal tar contamination was difficult. The excavation extended right to the edge of the foundation walls of the buildings and below the footing elevations. To minimize the impacts, a complex temporary wall system of interlocking caissons and whaler/strut supports was used, and the entire structure and supports were closely monitored using daily precision surveys, seismic monitors and crack sensors. The site was excavated and backfilled without damage or incident.

It was well publicized that coal tar contains benzene, a carcinogen, so air quality was a concern. Coal tar also has a strong “moth ball” odour related to the volatilization of naphthalene. As a result, air quality testing and monitoring was conducted throughout the work day, downwind of the site, using photoionization detectors. Dust samples were collected and analyzed on two portable gas chromatographs for benzene, toluene, ethylbenzene, xylenes, and naphthalene. As well, odour suppressing foam and tarps were used. Much of the contaminated soil excavation was done during cold winter months when volatilization was reduced.

The comprehensive health and safety plan for workers included an on-site de-contamination trailer complete with showers and first aid facilities, and a resident certified industrial hygienist to monitor conditions. The work was completed without injury or incident, and the public’s concerns were mitigated.

Approximately 20,000 tonnes of “haz-ardous” contaminated soil and 60,000 tonnes of “non-hazardous” contaminated soil were hauled off-site for disposal. Due to the quality and quantity of the borehole and soil characterization data, the excavation and disposal process was completed as a seamless turnkey operation. No costly and time consuming stockpiling or sampling on site was required prior to removing the soils. This saved the city an estimated $3 million in disposal costs. Strict protocols for chain-of-custody were imposed to minimize risks of future litigation to the city.

When heavily contaminated perched groundwater was encountered at a depth of 2 metres and approximately 8 metres deep, it was collected, treated and discharged to the municipal sanitary sewer under the scrutiny of the region’s waste management division. This approach resulted in cost savings of over $1 million.

Once the excavation was complete, a 1-metre thick impermeable clay barrier was constructed around the perimeter of the site to prevent (unrelated) up-gradient contaminated groundwater from recontaminating the site. As part of the final risk assessment, a sacrificial sweeper system was installed and connected to a system of collection manholes around the perimeter to allow for both long-term monitoring and the collection of residual contaminated groundwater.

The remediation project involved numerous stakehold-ers and agencies, and was the object of intense public scrutiny. With construction completed in June 2009, the positive end result is the transformation of an under-used area that can revitalize Kitchener’s downtown core.