The failure of a 40-metre high tailings dam at a copper mine in the B.C. interior caused widespread environmental damage. It has also shaken up the mining industry — and its engineers. 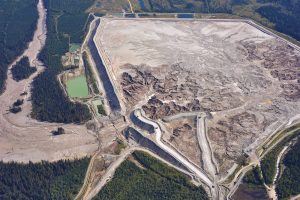 When up to 20 million cubic metres of tainted water and slurry spilled out from the tailings pond at the Mount Polley Mine in the Cariboo Region of central B.C. on August 4, 2014, it unleashed an environmental disaster.
The dam had been designed 20 years before and was built unknowingly on a pocket of soft clay 10 metres below. The water levels in the tailings pond were high: the copper mine had been expanded since 2005 and wastewater from processing the ore, along with run-off from the site, had been accumulating in the pond. A month before, the owner, Imperial Metals’ Mount Polley Mining Company, had finally received a permit to discharge more of the pond’s contents and had ordered a water treatment plant for the purpose.
At about midnight on August 4, the 40-metre perimeter embankment of the pond slumped approximately five metres. At first just a slow trickle began to flow over the dam. But it was the middle of the night and no-one was around to see and try to avert disaster.
Within an hour the flow had become a torrent. NASA images of the region show that the 4-sq. km tailings pond was virtually empty of water four days later. The water and slurry had flowed down into Polley Lake, which rose nearly 1 metre. The overflow gathered debris as it scoured open the banks of Hazeltine Creek, and then travelled southeast down the valley approximately 7 kilometres into Quesnel Lake, one of the most pristine deep water lakes in the world.
The environmental clean-up continues. Imperial Metals has spent at least $67 million on remediation so far.

The impacts of the dam breach reach much deeper and wider than into the soils and waters that were touched. The repercussions are changing the way that B.C. mine owners and their consulting engineers operate and how the government oversees them.
In the days immediately after the spill the province ordered that all 60 metal and coal mines that had tailings ponds should have a dam safety inspection within four months, and that these would be reviewed by an independent third party. Hatch was hired to help the Ministry of Energy and Mines with the review process. Each mine had its risk classification reviewed, and any that showed a high risk of failure had to update their emergency response plans.
Since then there have been three in-depth investigations into what caused the breach. First, a three-member Independent Review Panel was asked to investigate. It reported six months later.
The Chief Inspector of Mines from the B.C. Ministry of Energy and Mining also quickly initiated a detailed investigation of the technical failure and other factors at play. Klohn Crippen Berger helped develop the report — work which took 18 months and was published in December 2015. The government responded by immediately promising to introduce new regulations and requirements.
The third investigation, by the Ministry of Environment, is still ongoing.
Then on May 3 this year, the B.C. Auditor General issued her bombshell report. “Inadequate” was one of the less harsh conclusions Carol Bellringer reached in her, Audit of Compliance and Enforcement of the Mining Sector. The Mount Polley Mine breach had occurred during the period of her audit, and she found that the Ministries of Energy and Mines and Environment were not conducting adequate monitoring and site inspections. She did not mince words:  “To avoid such failures, business as usual cannot continue,” she wrote.

At the Association of Professional Engineers and Geoscientists of British Columbia (APEGBC) in Burnaby, work has been going on to tighten their guidelines since the disaster. One of the explicit recommendations in the first two investigative reports was that APEGBC should strengthen its guidelines for dam safety and construction, in particular for the design of tailings ponds.
This summer APEGBC will release two new documents: new APEGBC Professional Practice Guidelines: Site Characterization for Dam Foundations in B.C., and updated Professional Practice Guidelines for Legislated Dam Safety Reviews in B.C.
Janet Sinclair, chief operating officer at APEGBC, explains, “Our guidelines are not prescriptive. They’re about how you practice, not specifically how you do A, B and C. Members are held accountable to those guidelines. If for some reason there is an incident or we had a complaint, we could use the guideline as a measurement of whether or not the member had met common expectations in that area of practice.”
One crucial point they wrestled with is defining the roles and responsibilities of the Engineer of Record. “It’s about qualifying what that term means,” says Sinclair. “What the expectations are of the engineer of record, including how they deal with issues when perhaps the client is not heeding their advice. So, for example, if they feel something is a public safety hazard, they have an obligation to report it to the Chief Inspector of Mines.”
It’s not said, but it seems those writing the guidelines feel there could be cases (not specifically at the Mount Polley mine) where mining companies are putting pressure on consulting engineers.

Harvey McLeod, P.Eng., Geo., a principal of Klohn Crippen Berger (KCB), has spent the last year and a half of his life studying the causes of the Mount Polley Mine dam failure and what can be done to avert a similar accident. He was the lead engineer for KCB’s work on the Report for the Chief Inspector of Mines. McLeod is also helping to revise the guidelines for APEGBC, and new guidelines for the Canadian Dam Association and the Ministry of Energy and Mines.
“The irony of these failures is that they actually improve practice,” says McLeod. “From Mount Polley to the failure last year of the San Marco dam in Brazil [which killed 15 people], these events raise the awareness of regulators, of engineering companies, and owners, about the tremendous liability that failures impose, both on society and on the mining companies. So certainly we have seen an increased vigilance, and appropriately so, of doing it right. The technology for the safe design and management of tailing dams is there. You have to apply it.”
At KCB there were up to 15 people at a time working on the Chief Inspector of Mines’ investigation. They completed over 50 subsurface investigations at the site, unearthed design documents going back to 1989, and reviewed 100,000 pages of documents. They took part in interviews with scores of people, reviewed mine design regulations around the world, and helped with the final report, including the recommendations.
A press release by the Ministry of Energy and Mines’ issued on December 17 summarized what they found: “[T]he dam failed because the strength and location of a layer of clay underneath the dam was not taken into account in the design or in subsequent dam raises. The [Chief Inspector of Mines] also found other factors including the slope of the perimeter embankment, inadequate water management, insufficient beaches, and a sub-excavation at the outside toe of the dam exacerbated the collapse of the dam and the ensuing environmental damage.”
The statement continued: “While the breach would not have occurred had it not been for the undetected glaciolacustrine layer of soils (UGLU), the consequences of the breach were made worse by the other factors. Although operations on the mine site were not in contravention of any regulation, the Chief Inspector found that the mine failed to operate using best available practices.”

Asked if he was surprised about what they found during their investigations, McLeod answers: “The technical reason was not a surprise, certainly given that the glacial geology has the potential for that kind of layer.”
“I think what was interesting,” he adds, “was the number of contributing causes. The mining company had a number of different consultants involved; there were different mine personnel with different responsibilities. And the company had issues with getting a permit to discharge water, so they had more water in the impoundment than they otherwise would have. As outlined in our report, there was a number of contributing causes which individually would not have caused the failure, but we put them all together and, in combination with the geologic setting, they resulted in the disaster.”
One of the recommendations in the Chief Inspector’s report is that mine owners must have a qualified person on staff designated as responsible for the tailings. He or she would be responsible for safely managing the tailings, such as overseeing the planning, design, operation and maintenance of a tailings pond, as well as managing the levels of wastewater inside it.
As for the engineers, “It’s not an issue of “Thou shalt design it this way,” McLeod says. “But it is making clear who is accountable for different responsibilities and keeping records. I like to use the term that we are regulating good practice, not telling people how to design dams. Dams are all so different that you just can’t have one size fits all.”

But what about the revolving door of consulting engineers? Not only were different engineering companies involved over the years at Mount Polley, but also the individuals within the companies changed.
“Certainly since Mount Polley we’ve been working towards greater clarification of what we call the engineer-of-record,” says McLeod. “One of the outcomes [of the Mount Polley spill] is that we are incorporating into the regulations for the Ministry of Energy and Mines a better clarification of responsibilities, both of the engineer and the owner. Because if responsibilities aren’t clear, then people may assume that something is not their problem. An important component of good management is having people understand what they’re responsible for.”
Within consulting firms people retire or move on to other firms, so how does that affect who is responsible for the design of their clients’ project?
“That’s part of the discussion we’re having with the profession — the transition over time of the engineer of record’s responsibilities,” says McLeod. He adds, “Internally [at Klohn Crippen Berger] for example, we have an engineer-of-record for a project, but we also have a person who can move into that position over time.”
Doesn’t it mean the person is taking on a heavy load of responsibility for someone else’s design.
“You have to be careful, and that’s all you can do,” says McLeod. “When you take over a new dam you can’t know everything. But at the same time you have a professional responsibility to assess the information as best you can. If you have concerns you have to raise them so that they can be appropriately addressed.”
At APEGBC, Sinclair also hopes that companies will take a long hard look at what happened at the Mount Polley mine: “I would expect that the practitioners in the area would learn what they can about what happened and determine if they need to make changes in their own practice.”
She adds, “I also think that any time an event like this happens, the public questions how it could have been avoided — and that’s a reasonable thing to ask.”cce

Reference:
Investigation Report of the Chief Inspector of Mines, BC Minister of Energy and Mines, November 30, 2015. http://mssi.nrs.gov.bc.ca/1_CIMMountPolley/BCMEM-report-3_04-web.pdf