Upgrading the fire safety equipment in an occupied maximum security prison was a challenge, especially as the security system was being upgraded at the same time.Metro East Detention Centre in Toronto... 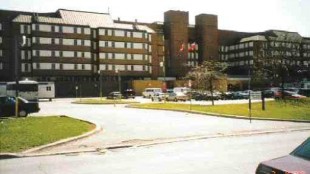 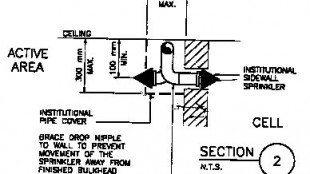 Section detail of the institutional pipe cover over the side wall sprinkling — a system designed to avoid vandalism and prevent inmates hanging themselves from the piping.

Sprinkler guards in the cells, designed by the general contractor.

Upgrading the fire safety equipment in an occupied maximum security prison was a challenge, especially as the security system was being upgraded at the same time.

Metro East Detention Centre in Toronto is a six-storey high, maximum security facility for 500 male inmates. The building was constructed in 1974 and was badly in need of the life-safety retrofit which was completed in March this year. Morrison Hershfield provided building code consulting, fire protection engineering design as well as construction review and other services to Ontario Realty Corporation for the project.

There are no mandatory retrofit requirements to comply with for detention facilities in the Ontario Fire Code. However, the client decided they needed to upgrade the building’s life safety system to current code levels as much as possible.

We analyzed the existing smoke control system and found that it was able to maintain not more than one per cent by volume of contaminated air during a two hour period after a fire had started — which is the criteria identified in the Ontario Building Code. However, we decided to provide sprinkler protection since there was no automatic door release system for the contained areas. If there was a fire in the building, each cell door had to be individually unlocked.

Besides the new automatic sprinklers, the life safety upgrades include a two-stage addressable fire alarm system with voice communication and a new 600 kW emergency generator.

The life safety retrofit had to be integrated — during construction — with a new security retrofit involving changes to the control room, the automated doors, and the architectural layout of the cell blocks. Containment and means of egress were improved, and the security system was upgraded with new emergency alarm and 24-camera CCTV systems.

A fire safety retrofit in an existing security facility with inmates still in occupancy must be carefully designed and constructed considering the security issues. The systems have to be tested and commissioned in a phased approach. Morrison Hershfield’s role included the systems commissioning and project management.

Because there is vandalism in the cells and it is difficult to test and maintain the smoke detectors, initially we recommended an air sampling type of detection system for the fire alarm system. With this type of system, also called an aspiration type system, a tube with holes in each cell would be installed and would draw in air under negative pressure and analyze it at a central chamber with a predetermined level of contamination. However, such a system was rejected due to costs.

On the other hand it was determined that the existing location of smoke detectors inside the return air shafts was not suitable for detecting smoke early since the air circulation inside the cells was poor. The inmates were blocking the air supply with soap and toilet paper since the grilles were located just above their bunk beds and the air was blowing directly on them and causing discomfort.

We decided to put the smoke detectors on the cell ceilings, with specially designed security cages over them to prevent vandalism. Designing the right combination of shape, gauge of metal and percentage of openings for the cages was a challenge due to the conflicting demands of fire safety versus security. The cage design had to be tested and approved by Underwriters Laboratories of Canada regarding its effect on the actuation time of the smoke detectors, and by Correctional Services for its ability to prevent vandalism to the detector.

The sprinkler systems also had to be specially designed not only to prevent vandalism, but also to reduce the possibility of inmates hanging themselves. This need was met by placing 16 gauge steel covers over the sprinkler piping at the intersection of the walls and ceiling, and by using horizontal side wall institutional sprinklers.