The Government of Canada recognized two ACEC member firms for their work in international development at the CIDA Export Awards Gala held in Ottawa last December.Acres International Ltd. of Toronto wo... 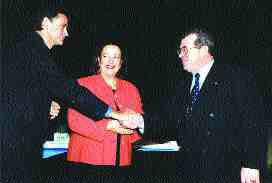 The Government of Canada recognized two ACEC member firms for their work in international development at the CIDA Export Awards Gala held in Ottawa last December.

Acres International Ltd. of Toronto won the CIDA Award of Excellence for International Co-operation, sponsored by General Motors, for provision of transport equipment, transport services or other capital equipment.

Acres is helping to extend the life and improve the operational safety of Royal Nepal Airlines Corporation Twin Otter aircraft. Aircraft parts and maintenance were acquired from Canadian suppliers and Acres supervised the replacement of old parts, which has extended the life of the planes by an additional 20 years. Training in aircraft maintenance, safety and management is being provided to the Civil Aviation Authority of Nepal and to Royal Nepal Corporation staff. Nepal’s air regulations have also been updated in order to bring them up to international standards.

UMA Engineering Ltd. of Calgary received a Canadian consulting engineering award for a restoration and conservation project in the Aral Sea basin. The project also received an Award of Merit at this year’s Canadian Consulting Engineering Awards presented in Toronto this past October.

UMA designed irrigation controls for the Aral Sea in Central Asia. Once the fourth largest lake in the world, the Aral Sea has experienced declines in water flow from 50 to five cubic kilometers per year since 1960. UMA developed a system to automatically regulate flow via remote computer. This system was installed in six weeks and is helping to stabilize the shoreline of the sea and reduce water wastage, with positive benefits for the surrounding communities.