Founded in 1916, the Southern Alberta Institute of Technology (SAIT) has grown to offer multiple post-secondary programs and training to approximately 71,000 students annually. Situated in Calgary at 16th Avenue and Crowchild Trail, with a view... 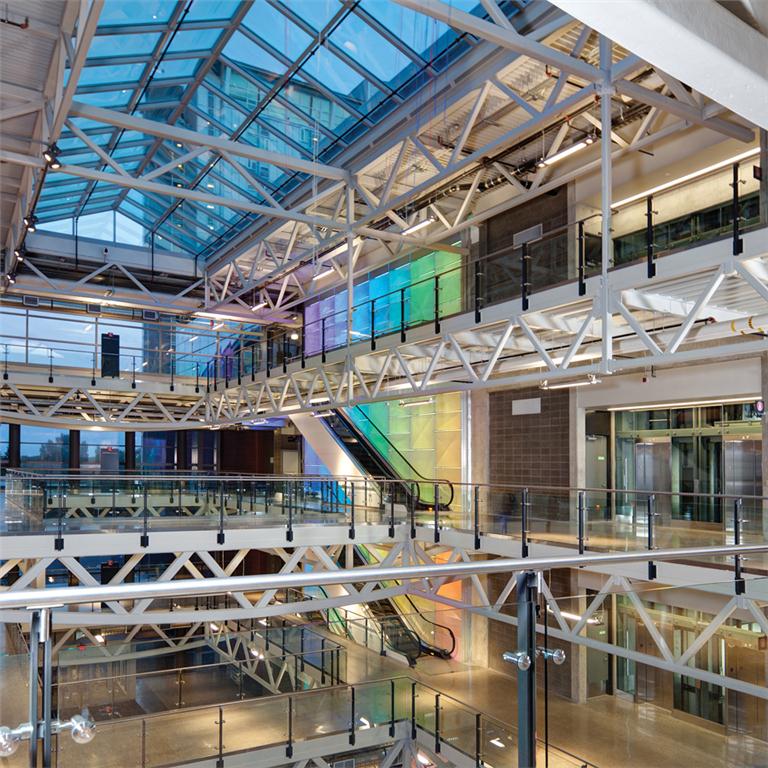 Founded in 1916, the Southern Alberta Institute of Technology (SAIT) has grown to offer multiple post-secondary programs and training to approximately 71,000 students annually. Situated in Calgary at 16th Avenue and Crowchild Trail, with a view of the city to the south and the Rocky Mountains to the west, the school has many fine examples of architecture. These include the new Trades and Technology Complex (TTC) which was completed in 2012.

Designed for staff and students mainly in the energy, construction, and manufacturing fields, the 740,000-sq. ft. TTC consists of three individual buildings: the Aldred Centre, the Johnson-Cobbe Energy Centre, and the Cenovus Energy Centre. The complex is located in the centre of the compact campus and occupies an area formerly covered by the Murdoch parking garage, Colonel James Walker Building, and a portion of the Riley complex.

The roofs on each of the TTC’s three buildings, for example, are constructed to resemble free flowing “waves of the future.” This architectural concept was further enhanced by an integrated lighting design that visually “floats” the rooftops above the complex’s collegiate pillars.

The TTC was intended to be instructive in its space planning and to present a pedagogical advantage to students and staff. Its buildings were designed using different engineering solutions as learning environments in which students can view different construction techniques and functioning systems. All the buildings, their infrastructure systems, and fundamental operations are regarded as teaching tools. For example, students can view the operational systems within each building, such as the escalator mechanisms, ventilation ducts, and sprinkler lines that are typically hidden from sight.

With constant communication taking place between Crossey, Consullux and Gibbs Gage, distance proved to be little issue despite there being over 3,000 kilometres separating Toronto from Calgary. The speed of construction was impressive and allowed the project to remain on schedule, including for the crucial decanting process.

Maximizing the operating transparency was a primary focus for each building’s lighting and electrical design. Toronto-based Crossey Engineering and Consullux Lighting Consultants designed the lighting with themes of discovery and learning at the forefront of their creation.

On the exterior of the Aldred Centre, energy efficient LED indirect lights were installed to create the widely visible, “floating” roof illusion.

Inside, the four-storey atrium (photo right) has both direct and indirect luminaires, combined 28-watt T5 fluorescent lamps with 39-watt CMH PAR30 lamps. A skylight allows a large amount of natural light to enter the space during daylight hours, and exposed conduits and pipelines are emphasized by the combination of lighting fixtures and the sun.

A custom-designed lighting and sculptural installation nicknamed the “drunken lights” creates a stunning feature piece inside the Aldred Centre and Johnson-Cobbe Energy Centre (photo page 28). The installation includes approximately 25 multi-coloured units in Johnson-Cobbe, and 40 in the Aldred Centre. It provides ambient light and also complements the surrounding industrial-styled architecture while softening it. Energy efficient RGB LED nodes were carefully placed within 4-ft. acrylic tubes to balance diffusion and light transmission. This effect delivers uniform surface illumination that is visible from all the surrounding areas.

RGB LED fixtures were also incorporated into a four-storey, perforated metal wall (see photo above). It adds character and intrigue to the atrium of the Aldred Centre through its colour changing capabilities. Both the wall and feature lighting fixtures are operated by a centralized DMX control system that allows for individual node control and virtually unlimited synchronized colour changing scenes. The overall effect brings dynamic colour and desired focal points to the industrial theme of the space.

A digital addressable lighting control system was designed to manage all the building’s lights. Combining energy efficient sources and strategies helped the structure to achieve a lighting power density of 0.65 watts per square foot and keep it on track for LEED Silver certification.

Encouraging students to interact with the building systems was the primary focus in creating the electrical system. It serves not only to support the buildings, but also to educate.

A custom third-party electrical platform was designed jointly by Crossey and the electrical contracter Canem Systems for the project. A web based program was created to allow facility managers across the three buildings to remotely monitor lamp and ballast life and quarterly energy use, and to control operations in the laboratories. The program provides the managers the ability to obtain real time as well as virtual information.

From a pedagogical perspective, several elements were incorporated into the electrical system to enhance the learning experience. Elevator shafts and electrical rooms were independently lit to provide maximum visibility inside the installed and functioning systems. Operating mechanical systems such as duct and pipe connections were installed to be visibly accessible to students.

The complex’s main switchboard was designed with a human-machine interface ability for instructional purposes. To aid in comprehension, all of the TTC’s shop drawings were nested within the complex’s electronic system and made available for re-ordering. In addition, a fully networked and fibre based communications system was integrated to allow for the premium flow of power and information.

Another challenge was created in the site’s master planning, which required detailed coordination to decant existing buildings located both on and off campus into temporary locations prior to demolition. This process also involved modifying the existing campus power grid while keeping the campus operations functional.

Fire protection in workshops and laboratories

Special attention was given to the fire protection systems placed in the complex’s laboratories and workshops where construction and trades-based exercises are primarily taught. Many hazardous materials and machines were required to be in operation, and electrical installations had to be extensively examined, detailed, and well coordinated in the field.

The presence of hazardous materials in these areas had a significant impact on how materials were located and installed. For example, lighting fixtures were required to be dropped 30” from the ceiling and in a several instances electrical equipment was located 36” above the floor.

Meanwhile in the atrium, a two stage addressable system with multiple interconnections was designed for smoke control.

With the addition of the TTC, SAIT continues to grow in influence and importance to the future of all Canadians. cce

Laura Eley is with Crossey Engineering Limited in Toronto.