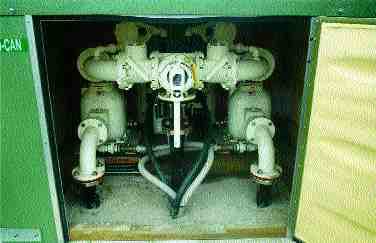 When the leachate pump station at the Upper Ottawa Street landfill site in Hamilton, Ontario required upgrading, the Regional municipal engineering staff faced some design challenges. Through the installation of a packaged, self-priming pump station, these issues were not only addressed, but a significant reduction in pump station capital cost was realized compared to the cost of using submersible pumps.

A review revealed that the leachate contains few solids, but is chemically complex. More than 50 chemicals were in the liquid. Non-metallic components can be vulnerable to leachate. With submersible pumps there had been a complete pump failure at this site every two years due to leaking cable seals. The municipal employees had refused to enter the wet well to work on these pumps, leading to the repairs being contracted out.

One of the solutions considered was a packaged pump station manufactured by Gorman-Rupp of Canada, located in St. Thomas, Ontario. This station had a number of characteristics which lent themselves to the Upper Ottawa Street site.

The station’s self-priming pumps meant that the pump and motor would be out of the liquid and out of the wet well. The maintenance issue would be addressed because self-priming pumps use standard TEFC motors, and there would be no cable seals in the leachate to fail. Gorman-Rupp reviewed the chemical composition of the leachate and supplied suitable elastomers for all secondary seals.

The pump station was available with a flexible control scheme that interfaced with the Region’s control strategy which included SCADA.

The packaged self-priming pump station was supplied complete, with pumps, piping, valves, controls and insulated enclosure assembled on a reinforced concrete base. Total weight was less than 2,000 kg. This was appropriate, because the pump station site is half a kilometre from the nearest road, with access via a steep, unpaved track. The station was ultimately transported from the road to the site using a tracked backhoe.

the packaged pump station was tested as a station by Gorman-Rupp before delivery, and system responsibility was assumed by them. Given the inaccessibility of the site and the tight construction schedule it was desirable that all components work together the first time.

A self-priming pump is “a pump that can lift liquid to its suction without the aid of an external priming device.” Lifts of 7.6 metres between the wet well level and pump suction are achievable. The design is for capacities up to 300 litres per second per pump and heads to 50 metres. Packaged self-priming pump stations are also applied as sewage lift stations and in water treatment/distribution systems.