DIALOG takes a multi-pronged approach to keeping employees engaged and building on its collaborative culture.

Georg Josi is the managing principal of the Edmonton studio for the multi-disciplined engineering, architectural, planning and design firm DIALOG, which has four locations in Canada and one in the U.S. 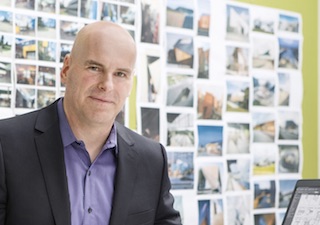 With the firm for for nine years, Josi is originally from Switzerland, where he worked as a structural engineer in a civil engineering firm. In his prior experience working on buildings, engineers always served as sub-consultants to architects, offering very little input up-front. Now, as an engineer at DIALOG, where project teams are often multi-disciplined, he has a seat at the table with the architects and says he finds the atmosphere much more rewarding.

The concept of amalgamating disciplines under one roof goes back to to the firm’s origins in 1960 (Cohos Evamy in Calgary), and then enhanced in 2010 when four firms (Cohos Evamy, Hotson Bakker Boniface Haden, Mole White Associates, and Office for Urbanism) joined forces to form DIALOG, creating a national practice built upon a multidisciplinary approach and committed to collaborative design.

As the firm continues to grow—now with over 700 employees across Calgary, Edmonton, Toronto, Vancouver and San Francisco—it’s also evolving and developing new processes and programs to keep its culture cohesive and moving forward in this competitive industry.

She says that employee-focused programs introduced at the company over the past couple of years played a role in securing this national recognition.

“There are a lot of tools out there for employee retention, and often people tend to focus on awards, but doing research we found a focus on the individual development of employees leads to high retention, high engagement, as well as high performance,” explains Oppedisano. “So we changed the model of our retention strategy to really focus on the development of our people.”

DIALOG did away with its annual performance review process and replaced it with quarterly check-ins where employees have developmental conversations with their assigned coaches. The objective is to focus on their own goals as professionals. “We’ve seen higher engagement in the program since it’s been implemented. It’s removed the anxiety of the performance review process, for both the reviewer and reviewee.”

Also, having employees share personal and professional goals, and documenting that information, allows the HR department to use that data to better focus its learning initiatives throughout the company.

The firm has also created a leadership program called BuildDIALOG, where about 10 people a year are selected from across all disciplines and are enrolled in courses combined with peer and external coaching.

“The core concept is developing leadership skills,” says Oppedisano “Professionals, engineers for example, will often look at their development within their profession, but maybe not from a broader leadership perspective. So we wanted to make that a focus to help people develop in that way.”

“We’ve grown significantly over the last two years, and we have not had an increase in our turnover rates. Which is not what you usually see,” she notes. 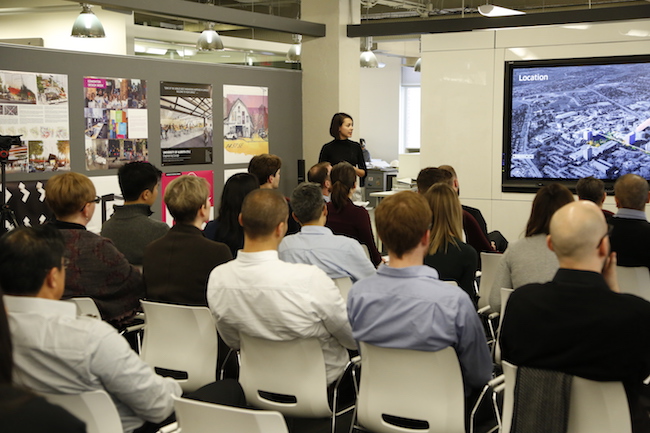 A presentation at AspireDIALOG 2017 in Calgary.

Aside from personal development, DIALOG is also committed to retaining and building upon its established collaborative company culture.

In 2016 the firm started its AspireDIALOG program, where each studio encourages teams from every discipline to share work being done by groups or individuals.

Team members create display boards and present in front of peers at their own studio. The projects are presented and then critically discussed. Four top selections from each studio then move on to the national level where a panel of external judges evaluate the presentations.

Diana Smith, an associate with the mechanical engineering team in Edmonton, collaborated on an Aspire presentation last year sharing the activities a group at the studio did to participate in Edmonton’s first ever Design Week.

“We had mechanical, electrical, architectural, planning and someone from marketing all on the team,” says Smith. “Five people presented at Aspire, talking about the process we went through along with some of the outcomes and lessons learned.”

Smith’s team ended up moving on to the national AspireDIALOG event in Calgary, a two-day gathering where the presentations were live-streamed via webcam so members from every studio could view the event.

Smith, who’s been at DIALOG for eight years, says the program works well at bringing the company together. 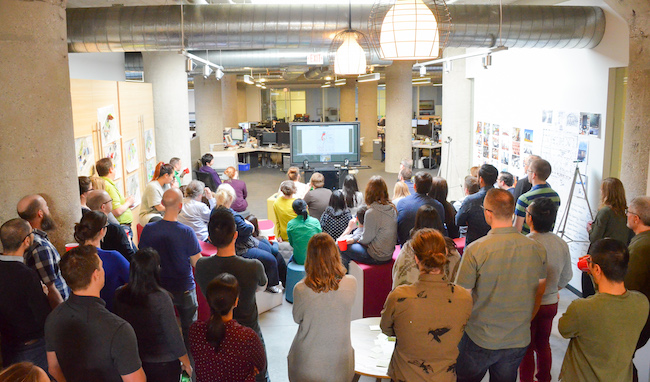 Employees at the Edmonton studio gather to watch a live stream of ElevateDIALOG presentations.

Another program is called ElevateDIALOG, a creative exercise first attempted in April 2016, springing out of the structural engineering team in Edmonton.

“We said, let’s take one day for the team to stop doing project work and instead work on a creative project,” explains Cameron Franchuk, an associate with the structural engineering team that helped spearhead the program. “You can work on whatever you want, with whomever you want in our group, but it has to be for the betterment of DIALOG. And at the end of the day you have to present what you’ve done to the rest of the group.”

From a team of 20 structural engineers in Edmonton, about 15 participated in the first endeavour.

“We came up with a lot of different ideas, some of them grew into larger projects, some are still on the backburner,” says Franchuk.

“I would say we had mixed success,” notes Josi, who was overseeing the structural engineering team at the time.

“It was a bit of a leap for some, while others really thrived. They were able to get their creative minds going, which can maybe sometimes be a hindrance in engineering, when caution and safety are your main concern.”

Word of the experience spread around the studio and to the corporate level, so in March 2017 the program ran again but on a wider scale. This time all of the company’s associates, around 90 people across all disciplines and all studios, were invited to take part.

“We had about 60 participate,” says Franchuk, “It was almost all teams with people working cross studio, and that was really neat because we don’t get an opportunity to do that very often.”

According to Josi, the net outcome of the second ElevateDIALOG was better than the first. “One of the associates decided to write everyone a small personal note,” he recalls. “It was a lot of work, but it made such an impact. It put a smile on my face, and I think it put a smile on 150 others as well.”

Like the AspireDIALOG program, the teams shared their ideas with the rest of the company as a live stream video webcast across the studios.

Franchuk admits that within a firm with more creative disciplines like architecture and interior design, it may be  surprising that engineers started the initiative, but he also chalks that up to the firm’s culture. “I think working directly with, and in the same office as, architects really helps our engineers become more creative.”

His message harkens back to Josi’s experience of personal fulfillment derived from working collaboratively in a multi-discipline design environment.

The willingness of the firm to experiment and actively promote collaboration and creativity, together with its in-house personal development initiatives, all combine to secure its rank among Canada’s Best Managed.