A Canadian-designed solution for constructing the next-generation of smart buildings. 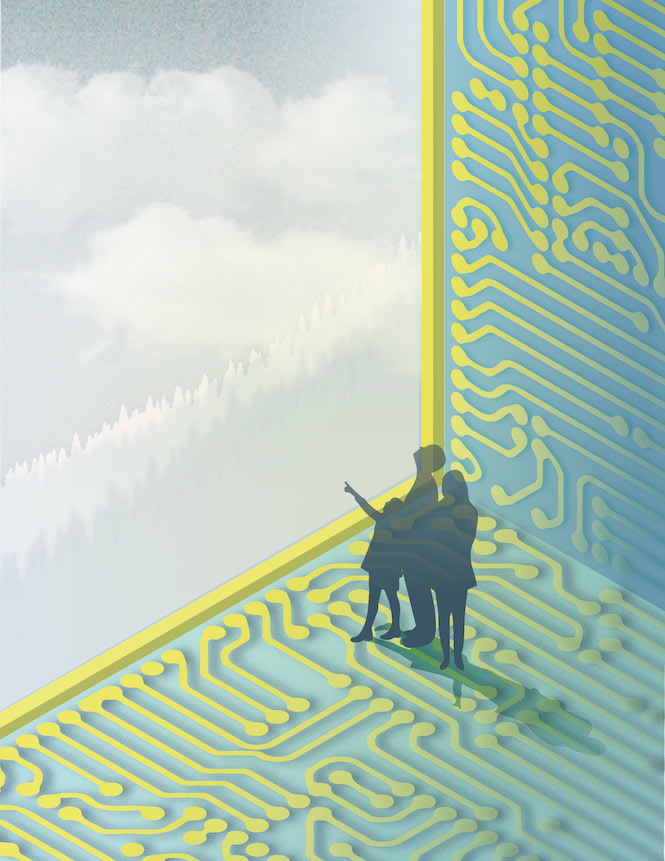 A unique consortium of companies in Toronto is fashioning the future of smart building with the introduction of the Intelligent Structural Panel (ISP), the modification of an existing building product that could revolutionize construction in the near future and create the next generation of buildings that are not only smart, but can think and improve their operations over time.

The origins of the ISP concept goes back to conversations between structural engineering firm Stephenson Engineering and WZMH Architects about a metal structural panel product from UK-based Intelligent Engineering. That company’s sandwich plate system (SPS) takes two metal plates and bonds them together with a polyurethane elastomer, creating a solid one- to two-inch-thick panel that can be used as an alternative to reinforced concrete for a building’s floors and core walls (it’s also used in shipbuilding, stadiums, and bridges).

Zenon Radewych, principal with WZMH and lead on the ISP Team recalls a late-night discussion in December 2017 about the idea of putting intelligence into the SPS panel. “Shortly after that meeting we contacted Quasar Consulting Group, a mechanical/electrical engineering firm that also specializes in information, communication and automation technology—the ICAT engineering side—to bring them on board to help us understand the intelligence side,” says Radewych.

In addition they brought along C3PoE, an electronics start-up founded by U of T engineering students that has developed sensor products. Together the ISP Team now includes an architectural firm, a structural engineering firm, a mechanical/electrical ICAT firm, and an electronics engineering team along with software developers and industrial engineers.

“We’ve created a think tank, and we’re developing a real working lab with all the firms partnering together, which is very unique for the AEC community,” notes Radewych.

The consulting engineering firms see this as a refreshing and necessary approach for their businesses. “Consulting services today are almost becoming a commodity service, you need to separate yourself in different ways,” says Zoran Tanasijevic, P.Eng., principal with Stephenson Engineering. “We are stepping out of the commodity service and going into something completely different which will benefit the market as well as us.” 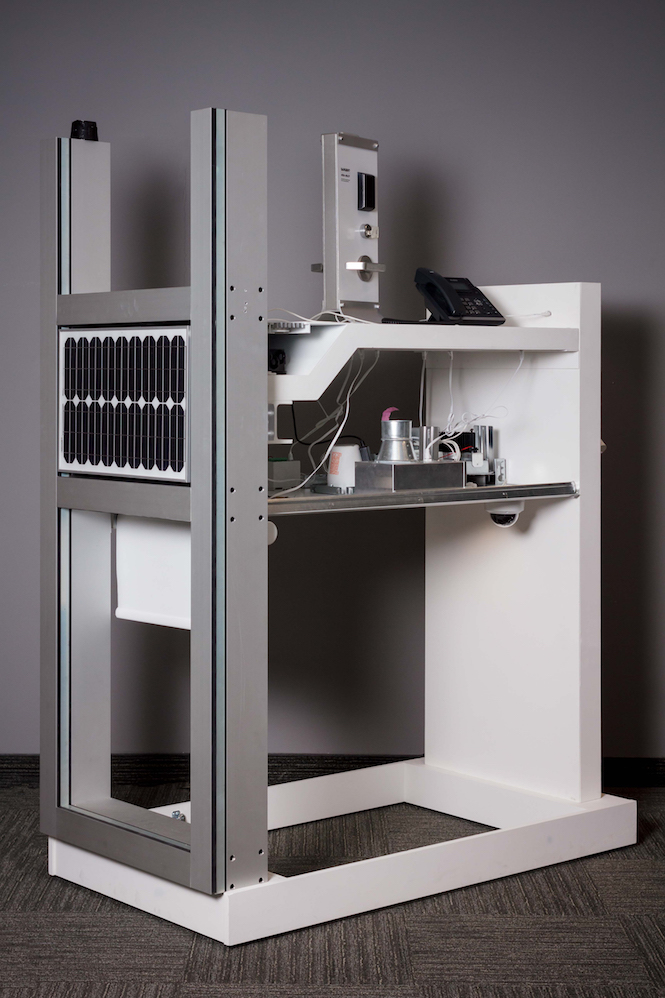 What the team has developed is a variation of the SPS structural panel that’s prefabricated with intelligence inside. Electrical power and IT connectivity, some heating and cooling functionality, along with sensor technology and possibly more is all included within the core of the steel panel. As explained, the circuitry running between the metal plates resembles a computer motherboard or microchip.

“We like to describe it as a prefabricated modular panel that’s very much like a smart tablet,” explains Radewych. “Picture walking on a smart tablet that has structural capacity—that’s what we’ve developed. You can dance on it and walk on it, but it’s also intelligent.”

The panels have connectors on the edges linking one panel to another, and each panel also has multiple universal plug-in points on the surface that allow for connecting hardwired devices into the panel. The components can plug in and pull out using basic RJ45 connectors.

The partners all refer to the system as truly plug-and-play, and the connectivity extends to a range of compatible devices including lighting, heating, ventilation and air conditioning, elevators, motorized shades, smoke alarms, security systems, and more.

“One way that this is different from other smart building solutions is that it is completely system and vendor neutral,” adds Kenan Huskovic, P.Eng., CEO of Quasar Consulting Group. The intelligence built into the panels removes the need for the complex integration of various systems in a building.

“One way I describe it to clients who aren’t very sophisticated with technology is, ‘Our smart building solution is about making the fabric of the building smart,” says Radewych. “Today’s smart buildings are all about devices, our solution is to make the fabric smart and then plug whatever you want into it. And because the fabric is smart, everything becomes smart.”

Why the team believes it’s in the right place at the right time is because of the confluence in the demand for smart buildings along with the growing acceptance and emergence of pre-fabrication and modular construction into the building industry.

“If you look at smart buildings today, there’s still the traditional physical component: they’re still built with tradesmen wearing rubber boots, pouring concrete,” explains Armin von Eppinghoven, P.Eng., executive vice president with Quasar Consulting Group. “The structure goes up, then mechanical and electrical trades install equipment, then hardware and software is put in, and then you have your smart building.” He’s convinced things are changing.

All of the partnering companies believe that modular and pre-fab construction is going to be the new way in the near future. “And we really wanted to look at an approach that went beyond what people are looking at today and take it not to the next level, but the next 10 levels by truly bringing technology into the fabric of the building,” says Radewych. “We know, based on the feedback from the industry, this solution is very unique, very exciting, and very much out-of-the-box thinking.”

The technology is attracting attention outside of the building industry, as the ISP Team has been accepted to participate in Microsoft’s global Internet of Things (IoT) Insider Labs. The tech giant learned about ISP through word of mouth and realized its potential to provide artificial intelligence (AI) solutions to the project.

“Microsoft was keen to see the product developed further and very interested in seeing the ISP panel and its key connected devices interact with their Microsoft Azure cloud computing service,” says Radewych.

”At our first lab sprint in Redmond, Washington, Microsoft provided 4 to 6 engineers that helped our team further develop components of the ISP panel. This particular sprint was very much focused on software integration into the Microsoft Azure cloud, as well as a peer review of our hardware solutions.”

While Radewych describes the ISP panel being the fabric of a building, another analogy may be to think of the panels of as the building’s nervous system, picking up signals from hundreds of sensors and devices all connected to the central nervous system, or the Internet of Things. Ultimately reams of data are being sent to the brain, or the cloud, where information is collated, analyzed, and interpreted through AI to respond with intelligent solutions to optimize a building’s operations.

It’s through the AI, they explain, that a smart building constructed with their product can become proactive to the needs of its inhabitants, instead of simply reactive.

The concept is an intelligent building infrastructure that communicates with the Internet of Things and provides users with a space that is user friendly, barrier free, accessible and safe.

Trial portions of the ISP’s software solution are currently being tested in Microsoft’s IoT & AI Insider Lab headquarters. “Working as a team, we are completing the development of all the software components that allow us to run connected devices that are ‘plugged’ into the ISP panel from an APP, which is connected back to Microsoft’s Azure Cloud—this component will be ready soon,” says Radewych.

He explains that the panel is also going through necessary approvals from standards and testing agencies, and the next step is a larger scale mock-up (in the range of 3,000—10,000 sq.ft.) to be installed in a live and working environment.

WZMH is currently in talks with a number of real estate developers and institutional clients that are interested in seeing a live and working mock-up constructed.

Radewych also notes they are currently working with one of Canada’s largest builders to design-build a number of what they are calling ‘smart res modular boxes’ that are essentially prefabricated residential units constructed using the ISP panel (and other smart building technologies they have developed over the past year).

“The intent is to showcase a solution for an economical, sustainable, prefabricated and smart residential solution that can be built and deployed worldwide for mid- to high-rise housing—including for condos, rental units, student housing, hotels, seniors’ residences, Olympic Game housing, workforce housing, etc.,” says Radewych. “This concept is possible due to the key fact that our solution for the ISP panel utilizes direct current (DC) and Power over Ethernet as the key electrical solution—which is a universal solution.”

Their target is to have the showcase of six modules constructed in the next 6-9 months in a location within Canada for showcasing to the public. The ISP panel itself will be ready for commercialization in the next 12-plus months.

The ISP Team is continuing to innovate. Stephenson is already working on alternative structural products, and the team is developing artificial intelligence solutions, including some that are top secret.

The R&D work that we’re doing is very much about the smart buildings but it’s also about looking at how we’ve been designing things for the past couple hundred years, and if we’re going to redesign it, how to do it in a very simple way, and without over engineering it,” says Radewych.

And Huskovic from Quasar Group is convinced they’re on the right track. “We believe in the fact that this is where the future will be. We actually don’t look at it as spending unbillable hours today; we’re preparing ourselves to be ahead of the pack tomorrow. And tomorrow is coming at a very fast pace.”