The Hamilton Transit Centre (HTC) in Richmond is among the transportation authority's most energy-efficient facilities.

TransLink’s Hamilton Transit Centre (HTC), which opened in September 2016 in Richmond, B.C., provides the infrastructure necessary to service, maintain and dispatch a fleet of 300 buses for the Lower Mainland. It has allowed the public transportation authority to increase its overall fleet to approximately 2,000 buses, while closing outdated facilities in Vancouver-Oakridge and North Vancouver.

It is also among TransLink’s most energy-efficient facilities, incorporating compressed natural gas (CNG) fuelling and designed to be equivalent to Leadership in Energy and Environmental Design (LEED) Silver certification. To help accomplish these aims, WSP’s multi-disciplinary team spanned structural, mechanical, electrical and civil engineering, as well as project management, architecture, communications, security and sustainable design, and was involved in the project’s complete life cycle, from choosing the site to 2009 to opening day.

Designing for the site

A transit centre requires large parking areas for the fleet, but also needs to be close to the population it serves. Building HTC in Richmond, where land is very expensive, meant the site design had to be as efficient as possible.

To address such constraints, while also reducing costs, delays, wear and tear, the design team worked to reduce site circulation distances by 100 m per vehicle per day. This was achieved after evaluating vehicle and employee circulation patterns and the effects they have on each other.

The facility is located on a brownfield industrial site that required significant environmental remediation and preloading (i.e. soil consolidation), which threatened to extend the project schedule. As well, there was significant off-site dike work along the Fraser River involving two municipal governments, provincial and federal ministries and private utilities.

The extent of the site work was addressed through multiple, overlapping construction contracts to maintain the project schedule. Efficient management of permit processes and authorities having jurisdiction (AHJs) was also key.

The design team worked to reduce site circulation distances by 100 m per vehicle per day.

An early design was nearly completed for a diesel-only facility when TransLink chose to incorporate CNG and gasoline fuelling, as a result of changing economics in the natural gas market. This resulted in significant changes to ventilation and electrical systems, particularly in the maintenance and fuelling buildings. Diesel fuel is typically non-flammable, whereas CNG is lighter than air and can create explosive mixtures.

TransLink wished to retain the interior fuelling arrangement designed for diesel, so the general building arrangements were left unchanged, while modifications were made to the mechanical and electrical systems. Increased ventilation rates work against energy efficiency, so a balance was required to ensure safe operations while still maintaining comfort and efficiency. An early decision to use in-floor radiant heating in the maintenance building was an advantage in obtaining this balance.

As the design of buses has evolved, their floors have been lowered to improve accessibility, displacing much of their equipment to the roof, including batteries, radiators, heaters, fans, electronics and fuel tanks. WSP worked with TransLink to develop new, lightweight rooftop access platforms for HTC, replacing traditional hydraulic ‘drawbridges’ with electrically actuated, roof-supported ‘drawers.’ Benefits include increased flexibility in bus positioning, reduced risk of vehicle damage, improved worker safety (due to reduced edge gaps) and a column-free open concept for much of the maintenance shop. 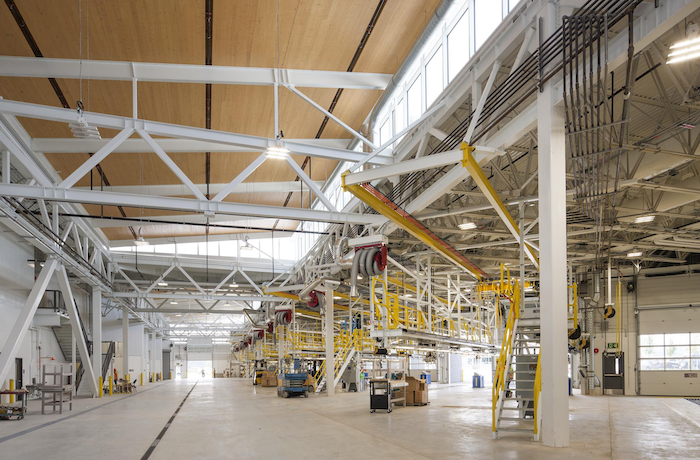 Being a good neighbour

The facility also had to complement the surrounding neighbourhood. While reliable public transportation is an amenity always in demand, most people do not want its infrastructure in their backyard.

HTC is at the eastern gateway to Richmond, near commercial businesses, residences and a day care. Public meetings were held to gather input from these neighbours regarding the proposed design and the issues important to them. Meanwhile, rezoning negotiations with the municipal government affected the size and shape of the site.

Parkland, landscaping with infiltration trenches, bike paths, intersection improvements and public seating areas were all included in the project to benefit the neighbourhood. Funding for the local day care was also provided as part of the rezoning process.

Creating new parkland and community outdoor space surrounding the facility involved the remediation and beautification of the existing brownfield industrial site; 2,500 m3 of contaminated soils and over 37,500 m3 of unsuitable fill material were removed and properly disposed of. The dike walls on the property lines were raised, improving flood protection.

From its inception, the sustainable design objective for HTC was to achieve a LEED Silver rating. This type of project does not fit within the typical uses and building types for which the LEED rating system was developed, but there was enough flexibility to make it achievable.

In the end, TransLink chose not to certify the project with the Canada Green Building Council (CaGBC). Instead, the project team pursued certification using the LEED-Canada NC 2009 rating system, achieving an adequate number of credits, equivalent to a LEED Silver rating. 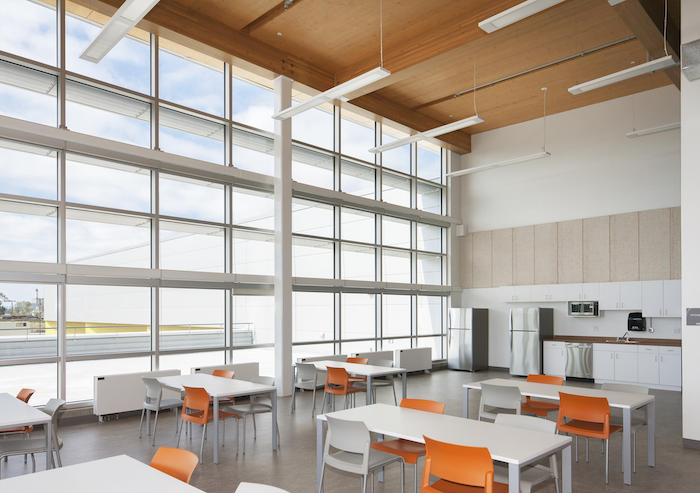 Wood sourced from British Columbia’s pine beetle stands was used throughout the facility.