Hydraulic Study of the 1997 Red River Flood; Award of Excellence

Klohn-Crippen Consultants Ltd., Calgary, Alberta and Richmond, B.C.Category: Studies and ResearchThe City of Winnipeg had a major flood in 1950 which affected large areas of the city and caused enormo... 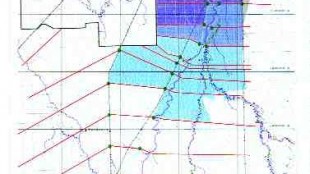 Above: extent of flooding upstream of Winnipeg in 1997 flood. Right: area flooded in excess of “natural” water levels. 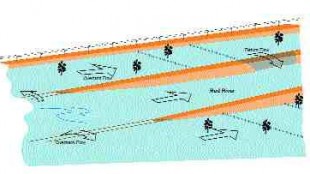 Flood modelling was very complex to account for hydrodynamic effects. It had to be delicate enough to simulate land which is so flat that a one-foot rise in the water elevation had a large impact over the whole area. 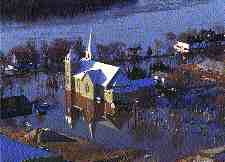 Flooding in Ste. Agathe, one of the towns that felt they had been sacrificed to save Winnipeg.

Above, Larry Buhr (left) and Don I. MacIntytre.

The City of Winnipeg had a major flood in 1950 which affected large areas of the city and caused enormous damage. Several years passed before all the damage was repaired. At its peak the flood discharged about 3,000 cubic metres per second (cms) and was one of the largest floods in nearly a century.

The flood of the century, however, occurred just two years ago, in 1997. The peak discharge was about 4,600 cms, some 50 per cent more than in 1950. The consequences of a flood of this magnitude are almost unfathomable.

In the years after the 1950 flood, a complex system of flood control works was constructed on both the Red and Assiniboine Rivers to protect the city of Winnipeg. The confluence of the Assiniboine and the Red River is in the centre of Winnipeg so works were required on both rivers.

The flood works on the Red River consist of a major diversion canal (Floodway) which diverts water around the city to the east, and a gated control structure which can be adjusted to regulate the fraction of the total flow which runs through the city. The Floodway is meant to be operated in a way which provides maximum protection for the city without raising the natural water levels upstream, except in emergency situations.

In the 1997 flood, an estimated 47 per cent of the excess water was diverted through the Floodway, saving the city from enormous damages. However, its operation became a contentious issue because communities upstream of Winnipeg in the Red River Valley felt that the diversion works were raising the water to unnatural levels and causing them adverse effects.

In response to these public concerns, the Manitoba Government asked the Manitoba Water Commission to prepare an independent review of actions taken during the 1997 flood. The commission retained Klohn-Crippen Consultants to determine what the natural levels without the Floodway would have been upstream of the inlet control structure, and to compare them with the levels that occurred in the spring of 1997.

Klohn-Crippen developed an innovative method for estimating natural levels using a hydrodynamic computer model for the Red River flood plain over a distance of 100 kilometres from the U.S./Canada border to Winnipeg. Four key steps were used to estimate the natural levels:

— The model was calibrated for the area upstream of the Floodway using data from the 1997 flood.

— The model was converted to a natural conditions model by removing the flood control infrastructure and extending the model through the city of Winnipeg.

— The natural conditions model was calibrated between Winnipeg and the Floodway using data from the 1950 flood before the flood control works were constructed.

— The 1997 flows were used to estimate natural levels.

The computer analysis concluded that the Floodway’s operations had raised the upstream water about 0.6 metres (two feet) above its natural level. This impact decreased progressively upstream.

The study therefore had a direct impact on communities in the Red River Valley. The government responded to the findings by increasing the level of flood damage compensation for these residents who had been affected by the operation of the Floodway gates.

One issue resolved by the model was the cause of the unforeseen and dramatic flooding of the community of Ste. Agathe. Klohn-Crippen successfully simulated the sudden overtopping of the CN rail line to the west of the town and the flow across country that flooded the community by the “back door.” The model showed that the flooding of Ste. Agathe was not caused by Floodway operations but that the presence of the West Dyke did contribute to the magnitude of the flood.

The study had to be carried out on a fixed budget and in a very tight schedule of three months. Strong co-operation with technical associate Dillon Consultants and the Manitoba Water Resources Branch was required to compile data and information for input to the study.

The model developed for the study was the first comprehensive hydrodynamic model established to analyze the Red River Floodway operations. Hydrodynamic modelling is not often used for flood control studies. Standard procedures apply steady-state modelling using a single discharge at one point in time. Such an approach could not be used for the Red River because flooding occurs in a large, slow moving wave and is very complex in two dimensions. Rather than a single discharge value, continuous flows were modelled over a two month period to properly account for the hydrodynamic effects, particularly the effects of flood plain storage and overtopping of railways and roads.

This kind of modelling flow across country in combination with river flow is a major challenge. It has been recognized that the Klohn-Crippen methodology provides a valuable solution to flood forecasting and flood operations throughout the Red River both in the United States and Canada. Indeed, the International Joint Commission retained Klohn-Crippen in 1998 to extend the model across the U.S. border to Grand Forks in North Dakota and to refine the model for future use in flood forecasting.

The model also provides the people of Manitoba with a tool to understand and manage the complexities of the environment in the Red River Valley. It is now being used to predict environmental impacts and to model the effect of floods on water quality. The latter was a major concern during the 1997 flood because septic fields overflowed and groundwater was contaminated.

A major additional achievement of the project was communicating the findings of the study to all levels of government and, most importantly, to the public. The report included charts, maps, profiles and schematic drawings to illustrate the complex flood processes. Klohn-Crippen made presentations, answered questions from the public and communicated with news reporters. Consequently, all parties favourably received the results of the report. Because of the high profile of the study, the Manitoba Water Commission requested two independent technical reviews of the modelling assignment, and both reviewers acknowledged the excellence of the work.