There are a number of advantages for institutional facilities. 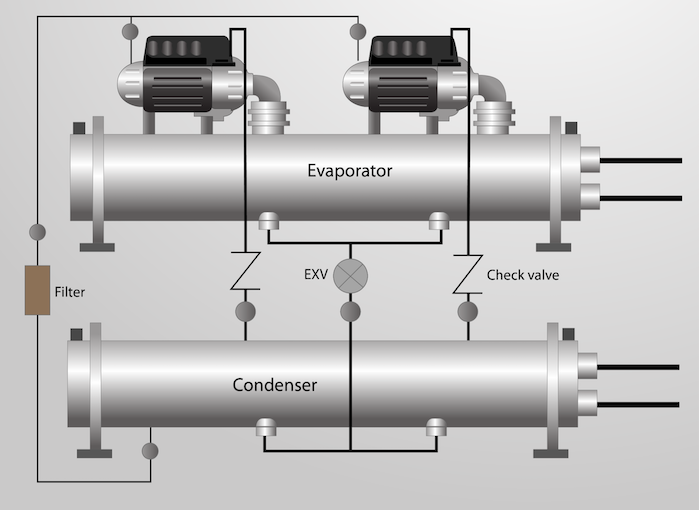 One of the key operational challenges for universities, schools, hospitals and other institutional buildings is getting the best possible performance from the HVAC system’s chiller over long hours while keeping maintenance costs to a minimum. Oil-free compressors can help meet this challenge.

Traditional compressors, such as screw-type, require oil for lubrication of their bearings, to support the movement of the rotor and to form a seal to prevent refrigerants from travelling in the wrong direction.

An oil-free compressor, on the other hand, can use magnetic bearings to create a field that allows the motor shaft to levitate and thus avoid metal-to-metal contact. This eliminates the need for oil as a lubricant and, for that matter, the entire oil management system for the chiller, including pumps, heaters, sumps and separators, let alone their costs of installation. Another result is less maintenance.

Removing oil from the chiller system has a number of benefits. Over time, oil deposits in the chiller’s heat exchangers will create an insulating barrier on their tubes, significantly degrading the chiller’s efficiency and capacity.

Indeed, ASHRAE studies have found the majority of traditional, oiled chillers installed in the field are ‘overcharged’ with oil, resulting in poorer performance than indicated in their original ratings.

The performance advantages achieved through the elimination of oil from the chiller system can also be maintained throughout the life of the compressor. Since there is no oil to inhibit performance and no mechanical wear for internal components, the compressor’s performance can remain unchanged for its entire operating life.

In 2018, such benefits were validated when a research project initiated by Smardt Chiller Group and Danfoss compared the performance of three oil-free compressors that had been in operation for more than 10 years.

Laboratory test results showed no significant reduction of efficiency or capacity compared to when they were originally shipped from a factory.

“The results of the analysis clearly demonstrated oil-free compressors maintain consistent performance through their entire operating life,” says Vince Canino, Smardt’s CEO. “All too often, customers fail to enjoy energy savings because of the effects oil can have on compressors and chillers. And because many of them do not invest in measuring and monitoring devices to calculate chiller capacity and efficiency at every minute of operation, they really don’t know what they have 10 years later.” 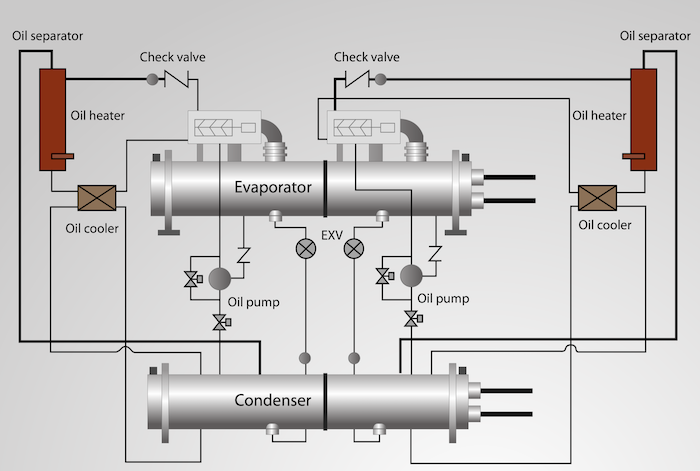 As mentioned, traditional compressors incur mechanical wear through metal-to-metal contact. This not only hurts performance, but also increases noise levels by up to 8 dBA compared to an oil-free compressor of similar size.

An aging chiller at one Canadian public-sector facility, for example, was operating above 90 dB, which made communications near the system extremely difficult. A water- cooled chiller with oil-free compressors was brought in to replace the older chiller, reducing sound levels so communication would be possible while the chiller was operating.

Less-obvious benefits of oil-free compressor technology are enjoyed in terms of maintenance. Removing oil from the system allows for a simplified chiller design, with significantly fewer mechanical parts, and avoids such frequent maintenance tasks as analyzing the oil for contaminants and changing filters.

A typical oil management system adds significant design complexity. It includes such components as an oil separator (which separates the oil from the refrigerant), oil cooler (which reduces the temperature of the oil, since hot oil loses some of its lubrication properties), oil heater (which boils off the refrigerant from the oil to prevent dilution) and an oil pump (which circulates the oil through the system). The costs associated with inspecting and maintaining such a system can add up to thousands of dollars each year — and tens of thousands over the life of the chiller.

“With oil-free chillers, we jokingly say our technicians show up with a screwdriver and a laptop, not a tool cart,” says Smardt’s Canino. “Further, they do not require the costly, major maintenance that typically occurs with oil-based systems in year 10, when they have to overhaul the compressors.”

Eddie Rodriguez is strategic marketing manager for Danfoss Turbocor. He has 27 years of experience in HVAC. This article originally appeared in the May/June 2021 issue of Canadian Consulting Engineer.