On June 24th, 2019, Waterfront Toronto released the draft Master Innovation and Development Plan proposed by Sidewalk Labs (an Alphabet company—also owners of Google) for the city’s 12-acre Quayside neighbourhood. The complete MIDP is available at quaysideto.ca.

The 1,500-plus-page three-volume Plan is still under review, and despite media reports of data collection and privacy concerns, the underlying infrastructure plan is intriguing.

Can you briefly explain the proposed distributed energy system?

[Mike Voll] The distributed energy system is comprised of an advanced power grid that will use solar energy, waste energy, battery storage, and time-based energy pricing to reduce reliance on the main Toronto Hydro grid during periods of peak demand.

The idea is to make an all-electric community affordable. Electricity produced by anerobic digestion of organic waste, solar PV, or shifted using energy storage, is used directly by the community hosting it rather than relying exclusively on the main utility grid. In the same way, thermal energy produced from sources of waste heat, along with geoexchange wells, is used directly by the buildings and facilities that host these thermal assets rather than relying on natural gas supply.

Would each building be an energy island?

[Mike Voll] Stantec and Sidewalk Labs have envisioned a flexible distribution feeder system in collaboration with Toronto Hydro, which can not only “island” a neighborhood in the event of a grid event, but can also “island” each individual building for further resiliency. Buildings will have on-site backup generators, potentially fueled by bio-diesel, to provide emergency services, such as elevators and hot water, for multiple days.

Do the costs of PV and battery technology need to keep dropping to make this feasible?

[Mike Voll] By starting small and scalable, we can manage the capital costs of building out a local smart grid, right-sizing investment and lowering costs to consumers. Applying technologies that use energy more efficiently will also be a key aspect of the power grid at Quayside, enabling active and automated control of energy.

It is envisioned that 75% peak electricity load will be serviced by battery storage and solar PV to reduce the use of grid power at costlier and more GHG intensive peak times.

There are currently electricity programs in Ontario that already make energy storage feasible for large electricity users and these programs will be utilized in conjunction with the home, building and office “energy schedulers” envisioned by Sidewalk Labs for this development. 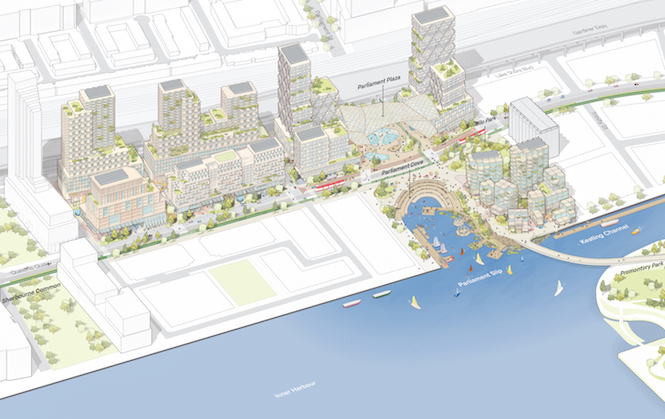 Can you describe how the pneumatic waste system would operate?

[Manoj Singh] Alongside Sidewalk Labs, our team designed Quayside’s utility systems to be adaptable, resilient, and able to adjust to technological change. The management of urban solid waste through underground pneumatic infrastructure is an important component of this strategy. By adopting a pneumatic waste system at Quayside, we can improve air quality, eliminate waste truck traffic and noise on main streets and increase the environmentally friendly operations of the waste collection process.

A Pneumatic Waste Collection System (PWCS) uses gravity chutes and compressed air flowing through a network of underground pipes to convey waste at high speeds of up to 70km/h from source inlets to centralized processing areas, or terminals.

Typical PWCS terminals have an operational radius of up to 2km. For a development the size of Quayside, one 400m2 terminal is expected to be required to service the development. This number considers projected daily collection quantities as calculated by Stantec and assumes three separate waste streams are received—organics, co-mingled recyclables, and trash.

The PWCS terminal at Quayside would have at-grade truck access and is proposed to be co-located with other services in the base of a building on Parcel 1. Organics, recyclables and trash received at the terminal would be compacted into separate sealed containers and transported by trucks to off-site facilities for processing.

PWCS infrastructure would be built in at Quayside. Visitors and residents would separate and dispose of their waste via user interface “smart chutes” in all buildings. The conceptual design for Quayside also includes five public realm PWCS inlet locations and one maintenance inlet. At every location, groups of inlets could be provided for the source separation of trash, organics, and dry recyclable waste streams. Each inlet would be connected to the underground PWCS pipe network, which could be directly buried or contained within Quayside’s Stantec-designed prefabricated Open Access Channels.

Underground tunnels (for the waste system as well as freight handling) are a central feature of the plan. What are the challenges and solutions of tunneling infrastructure in a water-adjacent location like this?

[Angelo Ligotti] Our designs are based on a basement tunnel system that includes freight, and a precast concrete Open Access Channel that contains power, utilities, gas as required, and potentially pneumatic waste. This means maintenance and upgrades can be undertaken without major surface disruption on the street.

The obvious challenges will be mitigating shallow groundwater during construction and designing a permanent waterproof tunnel system. These are items that we have discussed at a high level during this conceptual phase of the project but will need to spend a lot of time detailing in future phases.

The same challenges will be experienced for all building basements within the development. Luckily, there has been considerable development along Toronto’s waterfront in recent years so there are numerous projects that the team will learn from to manage groundwater.

Beyond water issues, the design of the tunnels will open up several other challenges such as conflicts with typical utilities, construction in structurally poor soil and legal issues when tunnels span multiple properties. We are looking forward to working with Sidewalk Labs to produce a tunnel design that will solve each of these interesting challenges.

The communities of the future need a utility system that is flexible and adaptable in order to be resilient, and able to adjust to technological change. We can do this while minimizing disruptions to the places people use.

Can you share insights on how the proposed thermal energy grid would operate?

[Mike Voll] The thermal grid, developed by Kerr Wood Leidal Consulting Engineers, would rely on clean energy sources to heat and cool buildings. At the building level, waste heat generated by wastewater would be repurposed to provide energy for heating and domestic hot water systems. For additional needs, buildings could draw from a hot and chilled water loop at the site level, generated by a mini heat pump plant that can exchange geothermal energy via underground wells.

A neighborhood loop of the thermal grid would connect all of the site plants and allow for the transfer of energy among sites. It would also be designed to incorporate other large-scale clean energy sources in the future, such as heat recovered from sewage stations.

What single innovation of the proposed development plan has you most excited?

[Dave Sauve] Infrastructure forms the framework of a city—it’s made up of the building blocks that determine how a city serves people, moves people, and provides opportunities for people. The infrastructure design at Quayside gives us the opportunity to look at infrastructure in a whole new way, that puts people at the centre of the design.

The proposed underground freight system may be the aspect that best represents that. Online commerce is booming, and delivery frequency is increasing–just look at Amazon’s two-hour delivery. This puts more traffic on the roads and at the curb, clogging transportation systems and our public realm.

At Quayside, Sidewalk Labs is looking at how you can take freight underground. The proposed design has all goods arriving first through an urban consolidation centre. Autonomous freight vehicles would then travel in underground tunnels to deliver parcels to their final destinations. Surface roads can remain clear for a people-first public realm, while important packages arrive on time. And, like all infrastructure components of Quayside, the freight system design would be flexible and scalable, so that it can evolve and adapt to changing needs and technologies.