Wedged between Toronto’s most important historic site and the giant concrete piers of the Gardiner Expressway is a building that is as unique as its location. 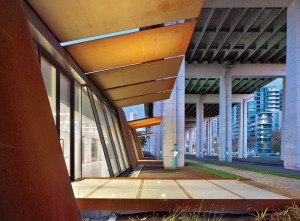 From the January-February 2016 print edition, page 14.

On a grey overcast afternoon in December trucks thunder along the Gardiner Expressway, high above a new visitor centre at Fort York in downtown Toronto. About 17 metres high, welders on platforms are fixing the underbelly of the aging expressway’s deck, sparks flying around them.
Many influential Torontonians detest the Gardiner as a “barrier to the lake” and would like to see it removed. Still, at close range the massive 1960s structure is impressive — tall and almost majestic.
Lying under the expressway’s shadow is the long and low form of the new Fort York Visitor Centre. The centre stretches for 140 metres east-west, at one end butting almost underneath the expressway. The building front has what looks like an armature of heavy weathering steel panels. Some of the metal panels are raised like canopies, exposing glass walls and a bright interior.
The architects, Patkau Architects of Vancouver and Kearns Mancini of Toronto, describe the building as defining a “fortified” edge to the Garrison Commons and historic fort buildings. Built originally in the late 18th century to defend the capital of Upper Canada, Fort York played a crucial role during the War of 1812 when it was attacked by U.S. soldiers and burned. It was rebuilt shortly afterwards and the wood and stone buildings that remain are Toronto’s oldest and most important historic site.
Opened last September, the 27,000 sq. ft. visitor centre is the official new entrance to the Fort. It sits on the southwestern edge of the 43-acre grounds, at a distance from the Fort buildings themselves. Between the centre and the buildings are the “Commons,” a field that once saw blood shed in fierce military battles. The perimeter location was chosen, explains Dan McNeil of Kearns Mancini, in order to avoid disturbing any archaeological remains and to keep the open vista of the Commons.
Visitors enter the new building by a path and landscaped area below the expressway. To the left is administrative space, and to the right are a long reception hall, a small theatre and an enclosed exhibit hall. At one end of the exhibit hall is a small room called the “Vault” where especially treasured and fragile artifacts such as the historic flags of the Fort’s militia will be conserved and displayed.
From the entry hall visitors can also proceed to the building’s upper level through a long “time tunnel” ramp of audio visual displays to emerge outside on the upper level at the Commons. Here there is a long roof patio bounded by a translucent glass wall that is illuminated at night.
The Patkau-Kearns Mancini design won against three other schemes in an architectural competition held in 2009.

Set into an embankment
— structural highlights
Jen Watson, P.Eng. who managed the project for Read Jones Christoffersen, explains that for them as the structural engineers: “The location ended up being the main challenge in several ways.”
First, they had to be careful that the construction did not affect the expressway’s piers, which meant consulting with the city. Second, a critical high-voltage electrical transmission duct bank that feeds the city’s financial core runs along the north wall, just a few metres away from the building.
The building is not only wedged between these two pieces of critical infrastructure, but it also sits on what was the original shoreline of Lake Ontario. This was the city’s lakefront before the land to the south was filled in.
Thus the centre is set into the side of an embankment, and according to Watson it functions as “one large retaining structure holding back the earth of the Fort York grounds.” She explains “We did a lot of work with the geotechnical engineer, Terraprobe, on how to deal with the earth pressure from behind the building.”
Additionally, Watson explains, the soil conditions below the centre are challenging. “The soil is a combination of fill material from when the expressway was built, and the lakebed. We had to extend caissons down into the rock bed approximately four metres down. The caissons are cantilevered up to take the lateral loads of the earth.”
Dominic Fagotto, P.Eng., a principal at RJC, continues: ‘The pressure is along the north wall, which rises vertically from the lower floor to the top of the roof. The two floors act like diaphragms, while perpendicular walls add support and transfer the loads down to the foundations. The whole structure works together and transfers the loads down to the top of the caissons.”
The heavy steel canopy along the building’s front edge had to be designed so that it could be removed if necessary to allow crews access to do maintenance work on the Gardiner structure above.
Also the engineers worked to accommodate the architects’ vision. The canopies are slightly different sizes but had to be made to look all the same. And “It was really important to the architects to make sure that the steel plate does not look as though it is deflecting,” says Fagotto. “Our challenge was to find the right thickness of plate and yet not go overboard. And we had to hide the supports for the raised panels as much as we could so that they appear to be just floating there without visible support.”
RJC joined the canopies into the main structure using collar plates that connect to a large tube-like structure that runs the length of the canopies. “Quite a lot of detailing went into those connections,” says Watson.” The connections look like large door hinges, but are immobile.
The last structural challenge that Fagotto and Watson mention is the “time tunnel” ramp that takes visitors to the upper floor and exit. “It is a very long span of concrete — about 30 metres long — in a box-like structure,” says Watson. “That is a very large volume of concrete to be placed in one pour. Also it’s on a slope, which is a challenge. We worked with the contractor on the sequence of the pour, and the pour joints and admixtures we would use.”
Fagotto adds: “It is truly an interesting little building in that nothing is the same. Sometimes you can hand off a building and there is little interaction with the contractor. In this case from start to finish there was a lot of collaboration with the whole team to make it work. It was a lot of fun.”

Quiet sanctuary — building HVAC systems
Once inside, one is hardly aware of the adjacent expressway. On an afternoon when there are few visitors, the space is quiet and peaceful. Luminous white walls stretch into the distance. In October the “Magna Carta, Law, Liberty and Legacy” exhibit drew people, but currently there are just a few artifacts on display in the entrance hall, and the audio-visual displays are not yet installed.
The quietness inside the space is a deliberate strategy. Chris Piché, P.Eng. of Integral Group, who did the mechanical and electrical engineering, explains how they used displacement ventilation and radiant heating and cooling throughout as a means of keeping noise levels down. “You don’t hear rattling ductwork and you don’t hear air gushing through the space,” says Piché. “The use of the radiant system coupled with the displacement ventilation means we are able to reduce airflow velocity, as well as provide an even distribution of heating and cooling, while managing the acoustical aspects for the space.”
The radiant slabs located in floors throughout the building are served by a series of air side heat pumps and variant refrigerant flow (VRF) systems.
Incoming 100% fresh air ventilation enters the building through unobtrusive small ducts integrated into the mullions of the curtainwall. The air enters at the bottom of the spaces, rises naturally and exhausts through tiny, barely visible vents in the ceiling plenum.
In the main exhibit hall, which is a windowless space on the north side, air enters below the walls, then rises and exits through little slits beside the lights in the ceiling. Similarly this room’s special fire detectors are virtually invisible in the ceiling.
“It has all been integrated very closely,” says Piché. “What it came down to was to be able to provide the high-performance systems that we needed without compromising the exhibits, so it involved working closely with the architects.”
The building is designed as Class A museum space, which means providing extremely tight tolerances for temperature and humidity control. Especially precious and fragile artifacts are exhibited in the “Vault” off the main exhibit area. The overall museum space, which measures approximately 420 square metres, has to be kept at (22C +/- 2C and 50% RH +/- 5%).
According to computer models the centre will be 40% more energy-efficient than a similar building designed according to the Model National Energy Code. Beyond the systems and equipment, and use of LED lighting throughout, there are structural and architectural features that promote energy efficiency.
The building was done as an integrated design, with architects and engineers at the table from the beginning, making the systems work together. For example, “along the south facade you can almost treat the Gardiner Expressway as an overhang,” Piché points out. “We have large span windows so we have the benefits of daylighting without having the drawbacks of direct solar heat gain.” Also, “burying the building into the berm along the north side helps reduce the overall heating and cooling loads.”

Dealing with expressway
run-off — site work
The Gardiner Expressway’s proximity also affected the site grading and stormwater management design. Rick Knight, P.Eng. of MMM Group/WSP, the engineers responsible for the site works, explains how they had to design for two scenarios: that the expressway would stay and that it may be removed in the future.
Currently most of the bents that support the expressway have drainage pipes that bring salt-water laden stormwater splashing down from the road onto the land in front of the visitor centre, says Knight. This area has been designed as a “liquid landscape” of grasses with a wooden walkway across the garden to recall a historical wharf that once stood at the original foreshore. Since the grasses will not tolerate the salt laden stormwater from the Gardiner, a separate storm drainage system for the Gardiner run-off was required.
But if the Gardiner is taken down, stormwater will drain across the site. For that eventuality Knight explains that they have incorporated the design of an infiltration trench that will take advantage of the existing permeable sandy soils under the expressway.cce