Engulfed – Warding off Floodwater in Alberta

After the 2013 flood of the century in southern Alberta, engineers are drawing up plans for dikes, dams and other large structures to save vulnerable communities from future disaster. 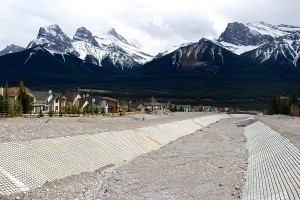 Rehabilitated Cougar Creek in Canmore, Alberta, one of the communities hardest hit during the June 2013 floods. Photo (c) Bill Corbett.

In the spring of 2013, Wolf Keller, P.Eng., had just retired as Calgary’s director of water services. Flying home from a European vacatiAon on June 22, he looked down and was shocked to see a city “half underwater.” Shortly after those floodwaters subsided, his phone rang, and he was asked to head an expert panel charged with finding ways to protect Calgary from such future devastation.
It was the flood of the century in southern Alberta and the most costly extreme weather event in Canadian history. The final toll was four lives lost, some 100,000 Albertans evacuated, more than $6 billion in losses and recovery costs, 1,000 kilometres of roads destroyed and hundreds of bridges and culverts washed away.
“It woke up a lot of people across Canada to the potential risk of geo-hazards,” says Eric Monteith, regional business leader in water for Stantec, one of dozens of consulting engineering firms that were involved in flood mitigation strategies following the 2013 event.
Substantial floods had hit Alberta previously, but most of them occurred long before development in many communities had crept onto floodplains and alluvial fans. Certainly, towns and cities devastated by the 2013 flood were ill-prepared for its severity.
It started with the perfect storm. Conditions were already ripe — a substantial, melting Rocky Mountains snowpack, previous heavy rains and partially frozen ground all added up to precious little capacity for upstream watersheds to absorb more moisture. Then on June 19 a moist upper low pressure system from Colorado parked itself against the mountains and for three days unloaded torrential, tropical-style rains.
With little warning, streams and rivers overflowed their banks, submerging houses and other buildings. More than two dozen communities declared states of emergency. Three municipalities were particularly hard hit: Calgary, High River and Canmore.
In Calgary, 6,300 homes were flooded and nearly 80,000 residents displaced. The downtown headquarters of Canada’s oil industry was partly submerged and without power for several days. The Saddledome, home to the Calgary Flames, was flooded to the 10th row of seating.
In the mountain community of Canmore the downtown was also flooded and parts of the Trans-Canada Highway were washed away. Dozens of houses along Cougar Creek were badly damaged, some teetering on the brink of being swept downstream. In the prairie town of High River, south of Calgary, the rampaging Highwood River forced the evacuation of all 13,000 residents, many for a considerable period of time.

Calgary ponders dams, diversion tunnels, canals
Over the past two years, each of the flooded municipalities has worked with the Alberta government to assess their flood protection options and implement short-term mitigation strategies. Now, they are embarking on major, long-term projects costing hundreds of millions of dollars.
Not surprisingly, the lion’s share is destined for Calgary. It’s the only large city in Canada situated at the confluence of two mountain rivers, the Bow and Elbow. During the storm, more than 200 millimetres of rain fell on those two watersheds and quickly funneled into the city, with peak flows cresting at 2,400 cubic metres per second on the Bow.
To date, little attention has been paid to mitigation proposals on the Bow River, other than to negotiate with TransAlta to lower water levels in its upstream hydroelectric reservoirs during flood events.
Most of the focus has been on the Elbow River, with a provincial task force proposing three measures for handling a flood similar to 2013, a roughly one-in-200-year event.
One measure is a 4-kilometre diversion tunnel from the Elbow’s Glenmore Reservoir to the Bow River below the confluence of the two rivers. “While a tunnel has some engineering [and] geotechnical challenges, it’s relatively simple — a hole in the ground with gates. And it’s reliable,” says Keller, chair of Calgary’s expert management panel on flood mitigation. But at an estimated cost of some $500 million for 1:200-year protection, it’s easily the least cost-effective of the three options, according to a February 2015 report for the Alberta government by consultants IGI Group and Golder Associates.
A somewhat better benefit-cost solution, the report says, is a $344-million dry, earth-fill dam across the Elbow River at McLean Creek in the foothills west of Calgary. Traversing a river gorge, the project would include a concrete spillway for discharging normal and flood flows, and an earth-cut spillway to protect the dam from extreme flooding.
The hands-down economic winner, with an estimated benefit-cost ratio of 2.07 is the Springbank off-stream reservoir, just upstream of Calgary. During a flood, a diversion weir on the Elbow would channel water along a 4.5-kilometre canal to the otherwise dry reservoir. A modified channel would later release water back to the river.
The Alberta government recently approved the Springbank option, an estimated $264-million project, with detailed design, engineering and environmental impact assessments being undertaken by Stantec. Once land acquisition negotiations are completed with affected landowners, construction is expected to start in 2016, with the reservoir operational by spring 2018.
Meanwhile, the McLean Creek option is still being studied. However, the province says its construction would be more expensive and complex and its environmental impacts greater. The government also indicated the Springbank reservoir’s capacity of 67.6 million cubic metres would be sufficient to mitigate 2013-level flows on the Elbow River.
City officials are less sure. “For a system capable of handling that severity of event, we’d probably need two of these things [mitigation measures]. We were lucky that the peak on the Elbow in 2013 only lasted one day,” says Keller.

Canmore controls mountain debris
The mountain community of Canmore, 100 kilometres to the west of Calgary, faces much different post-flood challenges. While the Bow River swelled in and around the town of 12,000 people in 2013, it was the discharge down steep tributary creeks of 250 millimetres of rain atop a melting snowpack that caused the greatest damage. For example, the flood washed 90,000 cubic metres of debris down Cougar Creek, which is along one of the most heavily developed alluvial fans in Canada.
Without adequate mitigation measures, the town engineers realized, a repeat disaster could occur within decades. The valley’s geological record indicates that the 2013 flood could have been much worse: a massive landslide creating a debris dam that, once ruptured, could have claimed many lives and caused untold economic losses.
So the town decided to depart from the traditional Canadian practice of designing flood protection to withstand a 100- or 200-year flood. This hazard-based approach does not account for the severity of consequences to assets at risk in a worst-case scenario. By contrast, international best practices have moved towards a risk-based method that evaluates the total social and economic consequences of flooding. Hazard here refers to the type, frequency and magnitude of a flood, while risk calculates the consequences and severity of that hazard, expressed in economic and life loss.
“It [risk-based evaluation] is an approach used quite widely by the nuclear, chemical and transportation industries. Only fairly recently has it been used to assess geo-hazards in Canada, and it’s a more responsible approach than arbitrarily chosen hazard levels,” says Matthias Jakob, a senior geoscientist with BGC, a Vancouver-based engineering firm that consulted for Canmore on its mitigation options.
“Knowing what we know now, we probably wouldn’t have allowed all that housing near Cougar Creek,” says town manager of engineering Andy Esarte, P.Eng.. “But the economic and social costs of removing [the homes] now would be excessive. So we’ve come up with an engineering solution that’s the next best thing.”
The current flood mitigation measures taken along Cougar Creek include bank channeling, culvert protection and the placement in the creek bed of articulated mats. Supplied by IECS, the mats are a series of concrete blocks linked with steel cable to prevent the banks eroding in a debris flood. The town also installed a debris net, a flexible ring that blocks boulders, trees and the like from washing down the creek bed.
The proposed long-term solution is to replace the debris net with a $40-million debris flood retention structure. Designed by Austrian engineering firm Alpinfra/Canadian Hydrotech, the 30-metre-high concrete dam would normally allow water through but retain it at critical times. It is designed for a landslide flood far more devastating than the 2013 flood.
“We were surprised in 2013,” says Esarte. “We don’t expect to be surprised again.”

Permanent dykes at High River
High River, 35 kilometres south of Calgary, has a history of flooding. But when 345 millimetres of upstream rainfall shot down the Highwood River in 2013, the peak flows of 1,820 cubic metres per second were more than double anything the town had experienced in a century, overwhelming existing protection systems.
Since then the town has been busy. “We built seven kilometres of permanent dikes along the river before last flood season,” says Reiley McKerracher, P.Eng., the town’s manager of renewal operations. “We’re miles ahead of what anyone else has done so far.”
With design and construction management help from engineering firm WorleyParsons, the town has built permanent dikes to guard against an upstream flow rate of 1,850 cubic metres per second, with an additional vertical metre of free-board protection. Interim dikes, offering 1,200 cubic metres per second of protection, have been added elsewhere in town until permanent ones can be built. The river’s flow capacity is also being increased by the removal of a rail bridge and the replacement of a vehicle bridge with one higher. Finally, the provincial government is buying and removing houses in two badly flooded communities.
Collectively, these measures are intended to sufficiently protect the town of 13,000 people from future flooding so that more expensive measures may not be needed. These include a proposed diversion of floodwater down a canal into a dry dam, and a $250-million-plus project that Dutch consultant Deltares said could not be economically justified, given expected annual damages of less than $1 million.
“Coming up with the right solutions for any affected community is challenging because of all the variables that have to be considered,” says Stantec’s Monteith. “In a lot of cases, the infrastructure itself is not overly complex. The challenge is balancing the risk versus the investment required.” cce

Bill Corbett is a freelance writer based in Calgary.