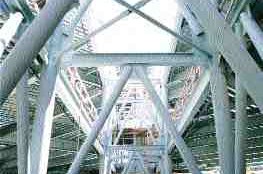 Braced derricks form a “street” through the building 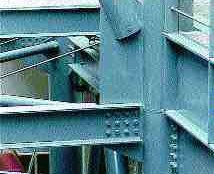 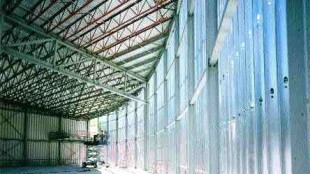 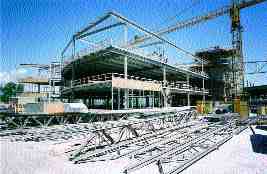 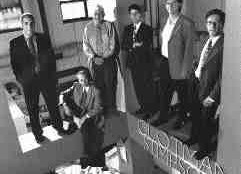 Electronic Arts (Canada) Inc., an interactive entertainment software company, wanted a building that would express their firm profile and provide a workspace that is both functional and inspirational. The facility, in Burnaby, British Columbia, includes audio and video studios and the world’s largest motion capture studio.

GlotmanSimpson had the challenge of designing the structure for a building that was wide open, with few interior support walls, and which is separated into setback quadrants in a circular format around a central area. The building also has a 21-metre high, 1-metre thick, 120-metre long quartzite-clad feature wall running down the centre. These characteristics posed a difficult and complex seismic and wind resistance problem that had to be overcome with a unique structural system that required extensive computer finite element analysis.

The seismic solution evolved into five four-storey derricks set along a circulation “street” and a central “hub” concrete core containing the elevator and stairwell. The derricks serve both as an architectural feature and the primary seismic resistance. Given the fact that the owner wanted the architectural look of structural steel, the structural engineers, building code consultants and mechanical consultants devised a unique equivalency to the building code to avoid spraying the structural steel members with fire-retarding material. The solution involves the use of a large water tank located on the structure. The tank feeds a sprinkler system that would be triggered in the event of a fire.

To the engineers’ knowledge the combination of the concrete central hub with braced derricks along the street is unique to this building. The hub receives the primary lateral loads and is anchored to a multilevel underground structure, while the derricks resist seismic rotation and building eccentricity. These components easily handle the complexity of the setback building.

The project was very complex in that it called for such a diverse mix of structural materials and solutions to achieve the architectural requirements for appearance, openness and site conservation. The 18,540-m2, five-storey complex contains three integrated building components that are stepped down a 24-metre slope and are locked together horizontally and vertically with the 120 metre glass-enclosed street that extends through the complex.

In order to have open spaces and clear spans without cluttering the perimeter with braces, the street literally became the structural backbone. The derricks act as visually open, yet strong, seismic braces with moment frames to secure the glass-enclosed stairwells at each end of the street. Columns are round with round pipe braces and wide flange floor framing elements. A unique steel gusset system was designed with mass production in mind to improve efficiency and allow connection for wide flange members to pipe members for very large seismic forces.

To resist horizontal and vertical forces on the stone-clad wall, W600 beams were used to cantilever the wall vertically 4.8 metres and horizontally 6 metres from the end of the building. In addition a 12 x 9-m cantilevered canopy is suspended off the end of the cantilevered wall with tension rods and backstays of up to 63 mm diameter. To resist wind loads, tie down rods were installed and raked back at 30 degrees to add drama to this feature while allowing vehicles to circulate through the entry below.

The complex has a 1,260-m2 multi-use room called the MoCap Studio which has spans of up to 42 metres. It is used mainly to create images for video games. Given its size and sloped roof, it required a sophisticated long-span structure to avoid having interior support columns. The walls, columns and roof framing were designed to resist additional loads incurred by filming sequences and have tie points for staging, safety equipment and lighting. The floor is designed for moderate truck loading to allow for large meetings or equipment trucks to deliver materials such as soil and sod for motion capture of a soccer game. The floor is also the ceiling of the quality assurance laboratory and its concrete structure isolates sound transmission between the two areas.

The structural cost of the building was approximately $280 per square metre, with the basic construction cost for the complex amounting to just over $30 million. It was completed on budget and on deadline in December 1998, just 11 months after the beginning of steel erection.