Digital terrain modelling (DTM) is generally required for any kind of large engineering project that stretches over a wide area. The traditional approach to this kind of surveying and terrain modellin... 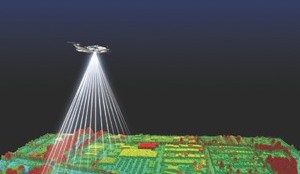 Airborne LiDAR scanning uses long-range laser combined with GPS and other technologies to create three-dimensional models of the earth’s surface. 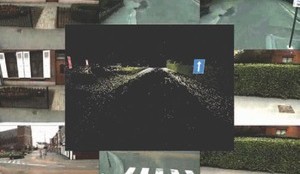 Street scene photographs with features identified in digital (X, Y and Z) point clouds. Features can be vectorized into several forms such as curbs, profiles and cross sections. 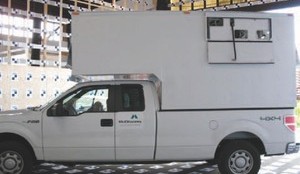 Digital terrain modelling (DTM) is generally required for any kind of large engineering project that stretches over a wide area. The traditional approach to this kind of surveying and terrain modelling has been to use aerial photography combined with photogrammetry to extract spot heights, contours and orthophotos.

In heavily treed areas, contours developed by photogrammetry are generally accurate to one-third of the tree height. Photography is acquired at a flying height designed to provide the map scales and contours requested for specific applications, ranging from National 1:50,000 topographic maps to detailed engineering mapping at 1:500.

The traditional method, however, has limitations. The weather has to be suitable to be able to fly to take the photograph, and the density of the tree cover limits the view to the true ground.

More recently, advances in lasers, image processing and computing power have led to changes in mapping and digital data acquisition. This article discusses three new digital surveying tools: LiDAR, lasers, and Mobile Mapping Systems. Using lasers mounted in an aircraft, or photo images captured from a vehicle, the technologies are able to produce horizontal and vertical ground points known as point clouds. These are clouds of points from which contours are generated.

The production of accurate contours and digital terrain modelling over large or remote areas has led to the introduction of flying with Airborne LiDAR to acquire vertical data. The Airborne LiDAR is a system consisting of a long-range laser that provides the distance from the aircraft to the ground, integrated with a GPS for horizontal and vertical position, an IMU (inertial measuring unit) which provides the tip, tilt and attitude of the aircraft, a camera for imagery, and an onboard computer.

The advantage of the LiDAR is the ability of the laser beam to penetrate between trees and reach the true ground. It can therefore provide vertical points to decimeter level. For acquiring vertical LiDAR data, flights can be completed day or night, 24 hours a day. The limitation is weather, as LiDAR cannot be flown in cloud or rain.

The aircraft mounted airborne LiDAR gives the broadest coverage, providing a digital surface model (DSM) of large areas or long corridors and without needing to set foot on the property. Integrated with a digital camera aligned to the laser, the system also provides an orthophoto of the project site — aerial photography and Bare Earth contours in one mission!

The digital aerial cameras provide both true colour and colour infrared IR imagery. The latter can be used for detecting impervious layers, assessing the health of vegetation, or detecting a water course.

What does Google Earth Street Scene have in common with Mobile Mapping Systems?

The easiest way to view MMS in action is to visit Google Earth Street View. The Google truck you see driving around taking photos is really a perfect example of MMS technology. Engineers, planners and municipal managers are now asking for a pre cise level of detail and accuracy for street scene information, and MMS can create images with exact horizontal and vertical geo-referencing information by integrating vehicle mounted, high-resolution digital cameras with GPS ground control points. The results are 360 images captured as you drive along a road or a utility corridor such as a railway, waterway, transmission line or pipeline.

The images are now ready for selective feature mapping and measurements. They give quick and reliable access to geo-referenced street hardware, ground surface and building information, enabling you to build your GIS database or CAD drawing.

Road profiles, cross sections and plan view line work can be extracted for engineering design and road upgrades. GIS, public works and planning staff can see street hardware and improvements by simply displaying the photo image scenes and digital data on their desktops.

Mobile Mapping Systems are developed with the automated photogrammetry technique as described above, or as a vehicle mounted system that integrates LiDAR, camera, GPS and Inertial Measuring Units (IMU), capturing image and point cloud data. All systems are a cost effective and safer alternative to conventional field survey techniques by keeping personnel off travelled lanes and minimizing traffic flow interruptions. Post-processed field data collected by the MMS can be manipulated at a later time, such as when winter limits field surveying activity.

Fixed-position terrestrial laser scanning with medium-range lasers are typically mounted on a tripod and set up over a known ground control point. They are designed for capturing features in mine sites, excavations, industrial plants, dams, offshore platforms, bridges, overpasses and roads. All features are captured by the laser measurements rotating on a vertical axis up to a 360 sweep. Ranges of up to two kilometres are achieved with millimeter accuracy. The resulting “point cloud” is a locally geo-referenced digital surface model (DSM) which can then be used for design, as-built records, monitoring, and surface and volume calculations.

These systems are very portable and can be used in confined spaces. They are also cost effective compared to a total station survey where many points or features are required to build a data model.

John Blair is Vice-President of Geomatics with McElhanney Consulting Services in Vancouver.