A mix of technologies was required for the first project of its kind in North America. 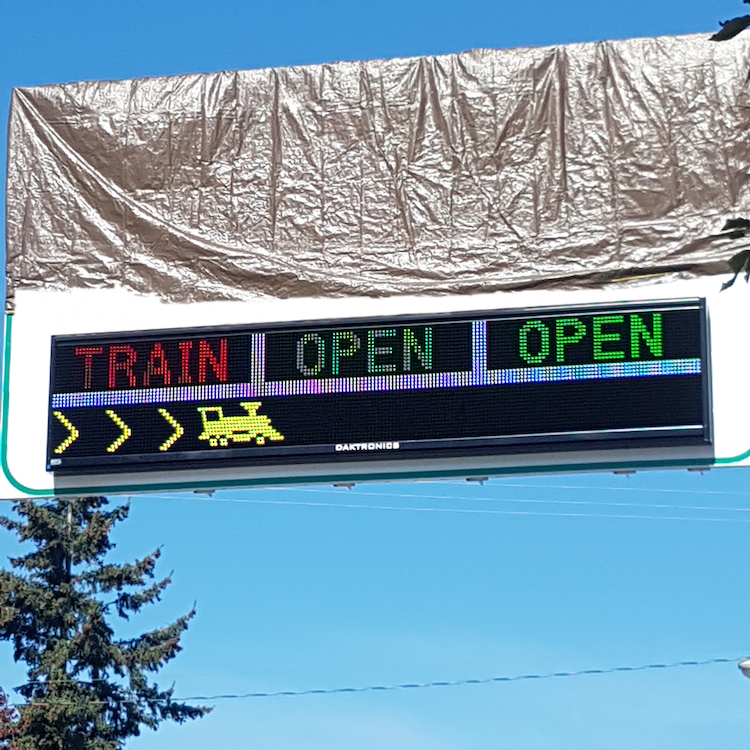 To mitigate the effects of trains blocking at-grade road crossings along the Roberts Bank Rail Corridor (RBRC) in Langley, B.C., the provincial ministry of transportation and infrastructure recently launched an intelligent transportation system (ITS) project, called the Railway Crossing Information System (RCIS). It integrates sensors, predictive algorithm software and dynamic messaging to update motorists on the status of en-route rail crossings, allowing them to avoid delays by detouring to nearby overpasses or unimpeded at-grade crossings.

The objective is to optimize the use of existing infrastructure—as an alternative to building new overpasses or other routes—to reduce traffic congestion and its associated economic and social impact. Vancouver-based PBX Engineering was engaged to plan, design and implement the system, managing a multidisciplinary team that included traffic modelling, structural, civil and geotechnical engineering.

During a rail event, major crossings currently typically remained occupied anywhere from two to five minutes. To support increased international trade through the Port of Vancouver, however, these events are predicted to increase in both length and frequency in the coming years, resulting in longer and more frequent crossing closures.

On average, every minute of blockage results in roughly five minutes of traffic congestion. By reducing this unnecessary idling, the RCIS would facilitate significant reductions in greenhouse gas (GHG) emissions and noise pollution. PBX’s team undertook extensive modelling of travel time savings to validate the cost-related and environmental benefits of the system.

As the project was the first of its kind in North America, however, there was no reference for the design process. An array of detection methods were researched and analyzed. A six-month pilot test was undertaken to evaluate these technologies and determine which iteration offered the greatest performance, reliability and accuracy in gathering the necessary metrics.

The hardware would need to resist inclement weather and vandalism. Posing further complexity, all of the infrastructure was required to be installed outside of the RBRC’s right of way (ROW) and independent of any rail equipment.

Based on the pilot test results, a combination of three different types of detection technologies was determined to provide the best performance and reliability, including an infrared (IR) sensor and two types of radar.

The RCIS uses strategically placed checkpoints to detect trains entering the ‘Langley’s’ area of the RBRC. Each detector is a suite of integrated sensors and field controllers that measure and track various train metrics. The information is processed using custom-developed adaptive algorithms within a sophisticated Advanced Traffic Management System (ATMS) and relayed to six MASs positioned along major arterial routes.

The data gathered by the RCIS has never been available before. It will be shared with other agencies in the region to help support long-term planning activities, streamline the movement of goods and improve public transportation.

PBX also developed the messaging strategy, which combines static and dynamic graphical elements on the full-colour LED digital signs. This process involved human factor interface studies to determine the most effective way of displaying information to the public. The results showed comprehension was highest when the trains’ crossing status and direction were displayed with simple, multi-coloured text and icons.

From start to finish

The firm drew on experience in systems integration from the ITS, security and industrial process control application sectors to create operational models, adaptive detection algorithms and exception processing capabilities for the RCIS. The installation of the MASs also involved civil and structural engineering and construction in dense urban environments. A helical pile design was used to minimize foundation size and reduce construction time for the large signs.

Another noteworthy challenge was the extent of co-ordination needed between the various stakeholders, landowners, rail authorities and utilities involved. Effective project management played a crucial role in ensuring success.

PBX collaborated closely with neighbouring municipalities to identify any planned projects or requirements that could affect the design of the RCIS and supported the provincial ministry through negotiations and co-ordination with rail companies. Any challenges that emerged during the construction process were addressed rapidly to ensure adherence to the project’s timeline. As a result, the project proceeded on schedule and on budget and is scheduled to go live this spring.