There was no known point of comparison. 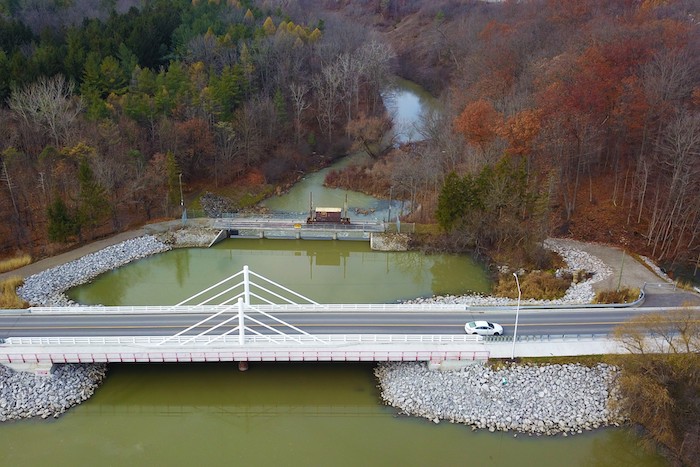 The City of St. Thomas, Ont., retained Entuitive as a structural engineering consultant, working in partnership with BT Engineering (BTE), to design a unique bridge for Dalewood Road on an affordable budget, featuring steel tube stays to support the girders, similar in concept to extradosed concrete bridges. Completed in 2019, the $4-million project replaced an existing modular Bailey bridge that was built in 1983 and had fallen into poor condition.

The main challenge was how to design a distinctive and easy-to-maintain bridge on a relatively small budget. BTE and Entuitive held a value engineering and constructability workshop during the design phase to better understand the client’s needs. Such sessions are not typical for projects of this small scale, but the process proved important for this project, particularly in learning about expectations concerning adjacent recreational lands, the Kettle Creek watercourse and the surrounding conservation area.

The resulting structural system enabled a visually interesting bridge as low to the water as possible. The design offered a strong separation between pedestrians and vehicular traffic, appropriate for a bridge that serves both as a vehicle transportation link to the city and a bridge for a major natural park for the city.

The 50-m long bridge consists of two 25-m spans and a central pier. Its total width of 11.85 m accommodates two lanes of traffic and a 3.35-m wide multi-use path. 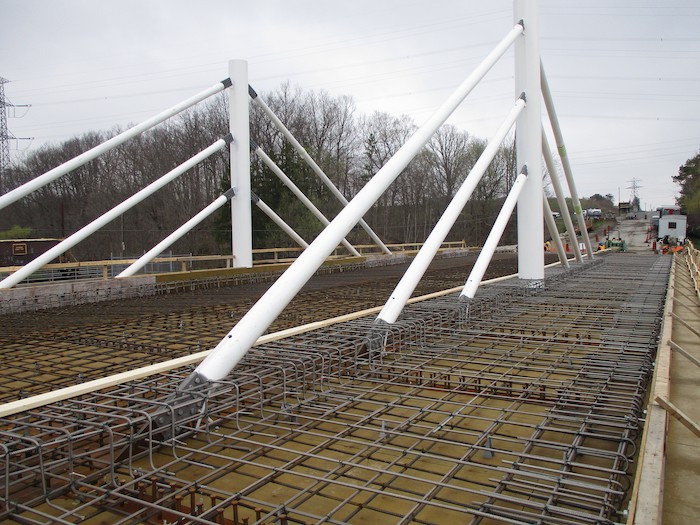 Steel tube stays and pylons were installed before casting the deck.

The superstructure features two steel box girders and a composite concrete deck. Unlike typical U-shaped steel box girders, the Dalewood Bridge’s girders were designed with full-width top flanges to increase their slenderness and stiffness, an innovation that allowed them to be erected without falsework or bracing, thereby reducing the project’s cost and environmental impact.

The design is also innovative in its use of steel tube stays to support the girders, similar to the design of extradosed concrete bridges. The stays were erected after the girders and before casting the deck. The deck weight sufficiently tensioned the stays, such that they would not experience compression under combined dead and live loads. This innovation precluded a deliberate tensioning procedure, which would have added cost and complexity. Finally, using integral abutments resulted in a jointless bridge without permanent bearings. 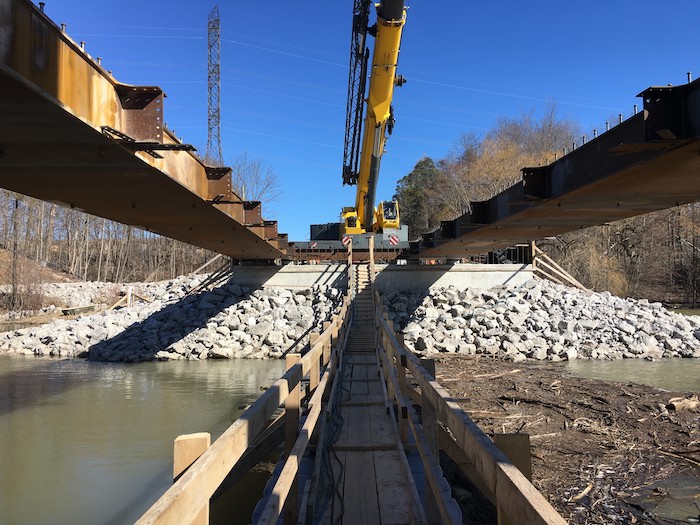 Construction was complicated by poor ground conditions and variable water depth. The solution was to create a circular cofferdam that could be installed with the same equipment that would be used to install the piles. The cofferdam could be sealed with a tremie plug anchored to the piles, thereby allowing the rest of the pier foundation to be constructed in the dry.

The south abutment also had to span over a previous bridge foundation that would have been prohibitively costly to remove. The abutment acted as a deep beam that allowed piles to be driven outboard of the obstructing previous abutment.

The solutions to both these problems were resolved through a design optimization process, but the first challenge was constructing an ‘extradosed steel bridge’ with no known comparable design. Technical design was carried out using a time-dependent staged construction analysis, with careful consideration of the construction sequence and service life but using conventional analysis tools. Reviews were undertaken using alternate methods and hand calculations to demonstrate the design would be safe, durable and functional as both a pedestrian and a vehicle bridge.

The earlier bridge’s foundation would have been prohibitively costly to remove.

As a signature bridge, the project was tasked with providing a memorable access point to the city and complementing the existing natural park setting. It was designed to suit the site and its surroundings, with interesting approaches to the structure and views of a reservoir. By making the park a more accessible place, the bridge can help invoke pride in the community and enhance local life.

The bridge was constructed on an improved horizontal and vertical road alignment, but included traffic calming by narrowing the lane widths. A reduction in speed was consistent with the recreational setting of the project. 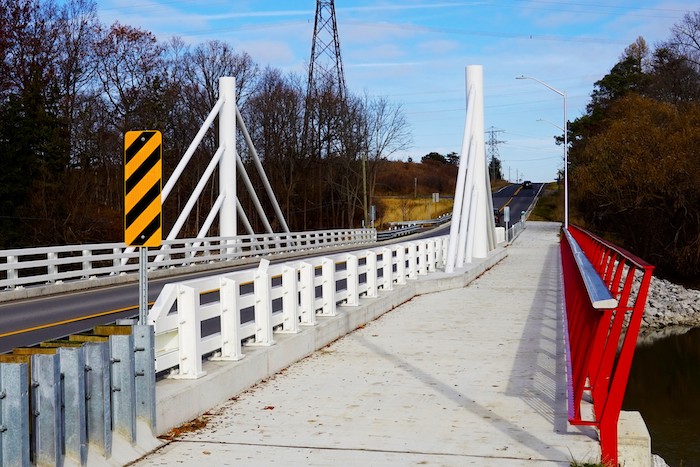 The design offered a strong separation between pedestrians and vehicular traffic.

The design was also efficient from a cost perspective, enabling the city to stay on budget. The steel pier cap was integrated with the superstructure, eliminating the pier diaphragm and bearings and avoiding a grade raise on the approaches, owing to a shallower superstructure. As the bridge does not have any permanent bearings, it will not require bearing replacement in the future. The design’s lack of joints will also reduce future rehabilitation needs, ultimately reducing the project’s life-cycle environmental footprint.

A competing concrete bridge design would have required a grade raise with additional cost and resulted in a negative impact on the park, as it would have required prestressed concrete girders much deeper than the shallow steel box girders of the selected design. It also would have been heavier, necessitating more expensive foundations.

The general contractor and the steel fabricator/erector were both locally based, providing jobs and economic stimulus within southwestern Ontario.

There were environmental challenges to building the bridge in a natural area. Wildlife concerns included the local fish habitat and upstream earth embankments that are part of the Kettle Creek dam. The project plan included the reconstruction and stabilization of these embankments, the creation of new fish habitat to compensate fisheries for new road embankments and the construction of a new parking lot and canoe launch to tie in with the sidewalk and multi-use pathway crossing over the bridge.

Stephen Brown is a principal and Andrew Lehan is a senior engineer with Entuitive. For more information, please contact them at stephen.brown@entuitive.com and andrew.lehan@entuitive.com.

This article originally appeared in the July/August 2021 issue of Canadian Consulting Engineer.