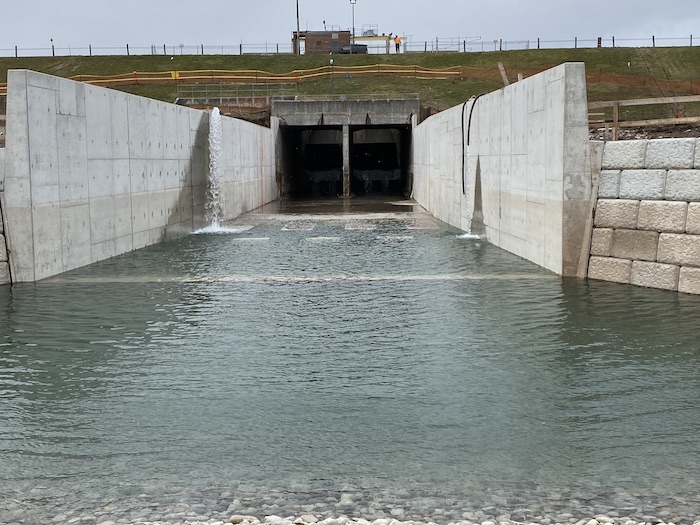 Hatch recently rehabilitated the Kelso dam (built in 1962) near Milton, Ont., and replaced the Minton Lake dam (built in 1941) in Williams Lake, B.C. This article will discuss both projects to illustrate some of the factors at play when considering the need for an aging dam’s total replacement or its careful rehabilitation.

The Kelso embankment dam was built as a flood control structure in response to Hurricane Hazel. In spring of 1963, during its first year of service, seepage and significant piping erosion occurred on the east side of the spillway structure. Emergency remedial measures were successfully implemented to repair the earth-fill embankment dam. In the decades that followed, the structure operated successfully without any incident.

On June 11, 2015, after many years without incident, foundation seepage (‘boil’) and evidence of turbid discharge were observed in the channel immediately downstream of the spillway, which could have been an indication of a potential failure or breach. The dam’s owner, Conservation Halton, contacted Hatch to address safety deficiencies, reduce risks to downstream communities and environments and to continue the dam’s function as an important tool to protect people and property from flooding.

Hatch recommended (a) lowering the reservoir level by 3 m to reduce loading on the dam and (b) increasing surveillance and piezometric instrumentation monitoring. The dam was found to have significant symptoms of internal erosion, which elevated the reservoir’s risk profile.

Hatch’s scope of work for the dam’s rehabilitation included:

Construction was performed during the dry summer season and part of the wet fall season. A significant excavation for the stilling basin at the downstream toe of the dam required a matrix of dewatering well-points to locally draw the water table down.  This was technically challenging, since the native foundation soils consisted of highly permeable, unconfined aquifers, producing vast amounts of water. The site was close to Milton’s municipal water wells, which rely upon this same aquifer. Vigilant water table monitoring was specified.

The project required a provincial permit to take water. Dewatering of the excavation was estimated to involve pumping up to 26 megalitres (ML) per day. During construction, this was increased to 45 ML per day with appropriate permit adjustments.

The rehabilitation project significantly improved the reliability and safety of the dam to meet current regulatory guidelines and standards. The reservoir could then be returned to its normal operating range and the dam could again provide flood control, recreation and low flow augmentation. 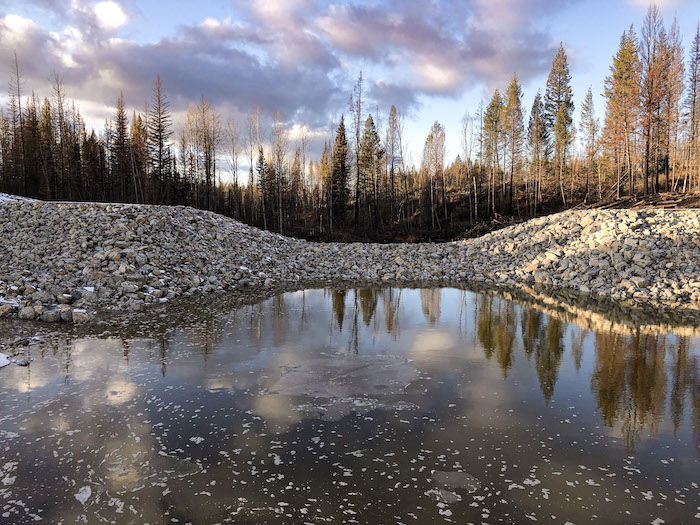 As water from the dam’s reservoir is used as an emergency source for an air tanker base and mixed with fire-retardant foam for aerial water bombers, both the ministry and BC Wildfire Service (BCWS) collaborated with Hatch during the design work to ensure the reservoir remained operational during the fire season from April to September.

Hatch demonstrated rehabilitation would negatively affect the water needed by the BCWS and not ensure sufficient longevity and safe operation. The firm’s findings indicated the need to build a new dam.

The team decided to build an earthfill embankment 35 m downstream of the old dam, which served as the cofferdam for the new construction. The location was close to the existing structure as possible, minimizing the size of the construction area, reducing the amount of additional impoundment required and facilitating care of water during construction.

The bedrock at Minton Lake was very low, such that conventional concrete spillways might not be suitable without rigorous preparation of deep foundations. The site was underlain by a dense glacial till containing boulders and cobbles, however, which was considered suitable for earthen dams and structures not sensitive to settlement. These conditions led Hatch to specify a rockfill-lined overflow spillway with a central cutoff wall, using conventional riprap for erosion protection.

The new structure was designed to safely pass water through its overflow emergency spillway during the freshet season without requiring manual gate operation, so as to avoid any chance of dam failure by unintentional overtopping.

The dam was successfully constructed prior to the spring 2020 freshet, which allowed for the region’s high flows to pass through safely. In July, the old dam was breached. The reservoir returned to regulation level very quickly, allowing local use and land impoundment to be maintained.

Hatch’s project team, for its part, acted as the project owner, working with the provincial ministry to ensure the new dam would meet its intended purpose and comply with current safety guidelines. No elevated structure was constructed and no concentrated water flow was created, which could endanger the public. And future maintenance can be handled by local construction companies, without requiring specialty contractors.

Bruce MacTavish and Nikou Jalayeri are project managers for Hatch and Bill Van Luven is a project manager for Conservation Halton. For more information, visit www.hatch.com.