In designing upgrades to the fire protection systems for a casino surveillance operations room, WSP evaluated various advanced systems for suppression and detection.

Since the advent of “objective-based” building codes in Canada in 2005, the role of the Fire Protection Engineer has evolved. As a specialist, the fire protection engineer applies fire safety science to evaluate proposed alternate building designs against what were traditionally known as the building code “prescriptive” measures. The prescriptive measures are now called “acceptable solutions.” Most of the time the acceptable solution is a reasonable approach, but for special circumstances it is the fire protection engineer’s specialized skills that enable the use of an alternate design in compliance with Canada’s objective-based building codes.
Several motivations make the objective-based process worthwhile. First, it gives the ability to take advantage of new materials or methods that are not yet codified into prescriptive measures. Next, the vision of the architect or designer can be realized to include a unique building feature that would traditionally be rejected as not fitting into an acceptable solution. Finally, it offers the ability to minimize costs by taking advantage of different options for the required fire safety features.
Let’s take a look at a case study of a recent project to highlight some of these skills.

Clean agent fire suppression
A casino decides to “double down” on the protection of its critical infrastructure by going above and beyond the minimum building code requirement by adding a clean agent fire suppression system to its back of house equipment and operations rooms. There are no prescriptive code requirements that mandate the installation of this kind of system and it takes a specialized skill set to ensure the equipment is protected against fire while maintaining operational effectiveness and life safety to the users of the equipment.
Clean agent fire suppression agents are designed to be used in spaces that could be occupied and are safe for use on energized electrical equipment without any lasting physiological effects, damage to equipment or environmental concerns. They come in two basic types: they work by either reducing the oxygen content of the space to a level below that which can support a fire, or by cooling flames to extinguish fires.
For clean agent systems there is no requirement from the Canadian building codes, but there are standards, such as NFPA 2001 Standard on Clean Agent Fire Extinguishing Systems. The protection concept is to provide very early detection of a fire and to activate the clean agent suppression system before the building sprinkler systems activate, hopefully before critical damage to equipment occurs. Because some of these operational areas are occupied by people from time to time, and it is possible for early warning equipment to activate before the rooms are evacuated, extra caution is required to ensure that the activation of the new suppression system would not add to the life safety threat.
A clean agent system that reduces oxygen content is designed to displace the air in a room with an inert gas such as nitrogen in enough quantity to be effective in extinguishing flame — while still enabling occupants to breathe for long enough that they can evacuate. A clean agent system that works by cooling is known as a halocarbon due to its chemical structure (organic compounds containing carbon atoms covalently bonded with halogens: fluorine, chlorine, bromine, or iodine).
Each chemical agent has its own set of pros and cons, including environmental and physiological properties.
The environmental qualities include the ozone depletion potential, and global warming potential, which is a value assigned to a chemical based on how long is remains in the atmosphere after discharge and its ability to absorb infrared radiation.
Physiological properties include the safety factor associated with what concentration is required for effectively extinguishment, measured against the concentration where toxic effects become a consideration (the concentration limit at which no or low observable adverse effects are measured in laboratory tests). These systems are intended to be used in total flooding applications, which means the clean agent gas is discharged into the protected space and allowed to remain there for a period of time (“soak time”) to ensure its effectiveness before the space is evacuated of the gas mixture and operations are returned to normal.
In order to better inform the casino’s stakeholders WSP analyzed the options available. The team reviewed different clean agent systems, including a fluoroketone (FK-5-1-12) and a heptafluoropropane (HFC-277ea), as well as a hybrid water/nitrogen system.
The analysis included the fundamental extinguishing methods of the different options; their costs for installation and maintenance; and their environmental factors and physiological factors, including the lowest and “no observable adverse effect” concentration. Also reviewed were operational factors such as the need for “room integrity” i.e. the room needs to be relatively airtight and able to withstand some “over pressure” so that the gas stays in the room for the minimum soak time. There are dampers installed to control the mixture of the gas and air.
Following the analysis, the client chose to go with the fluoroketone (FK-5-1-12) agent.
At this casino most emphasis was directed at smoke detection and creating a system that could operate reliably but very early in the fire development process. Fire detection buys time: time to react, time to conduct a preliminary investigation into the source of fire, time to exercise planned shutdown strategies, and time to prevent the escalation of a conflagration beyond a facility operator’s ability to control it. 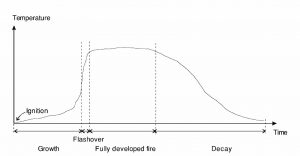 Understanding fire growth
and detection
Fires tend to grow in intensity over time depending on the available fuel and oxygen, but they don’t generally grow linearly with time. Fires are often modeled as being proportional to the square of time. The development of smoke generally follows fire growth patterns.
The graph opposite shows an idealized fire time temperature profile. The first portion of a fire after ignition is called the growth phase, followed by a transition from one burning item in a room to the burning of all of the items in the room, termed flashover. Next comes the fully developed burning period, followed by a decay time, when the intensity of the fire is controlled only by the remaining available fuel. The time period shown is that of minutes, with the whole event taking place in approximately less than an hour, with temperatures reaching as high as 1000°C.
The detection of smoke at the early growth phase therefore has disproportionately higher benefits than detection of smoke later because of this non-linear growth tendency. On this basis, a very early smoke detection system using an air aspirating smoke detector was selected at the casino to provide detection for the equipment and operational spaces.
An air aspirating smoke detector is an improvement over the standard spot type detector in that it actively samples the air around a protected space by drawing air through a series of pipes to a detection unit located close to the protected space. When coupled with very sensitive detection equipment, the air aspirating smoke detector provides many orders of magnitude more sensitivity over spot type smoke detectors. This early detection, coupled with clean agent suppression, provides the casino with a superior fire protection system that makes the best use of available technology, delivers the highest level of fire safety available for both occupants and infrastructure, and exceeds the minimum requirements of the Building Code.