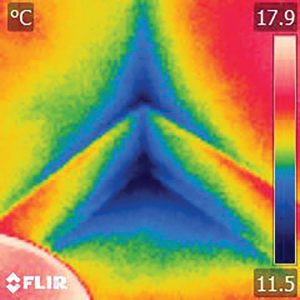 Figure 1. Thermal image of interior surface of an exterior corner of a new condominium building, showing thermal bridging at the floor slab and corner and at the connection of the walls. Source: Isis Bennet.

Multi-unit residential buildings (MURBs) such as high-rise condominium developments, have an inherent sustainability edge over the detached houses that were so central to the North American dream during the last half of the 20th century. MURBs have a heat-conserving form and contribute to urban intensification, which economically supports efficient public transit. Their carbon-shedding characteristics outweigh the net energy impact of a reduced surface area to collect solar energy.1
MURBs can also help buck the unfortunate trend where improvements to the energy efficiency of detached, single family homes are being largely offset by increasing floor areas.2 Moreover, in Canada’s major cities, where condos are the dominant new housing form, they represent one of few viable home ownership options for younger urban adults launching their careers.
But the inherent benefits of condominium buildings are not being fully realized. These buildings often fail to provide resilience against unforeseen, but ever more frequent, power outages and mechanical and electrical system failures. Much like a car with no gas, these buildings become largely unusable without energy. A prolonged power outage can leave their occupants without heating, cooling, outdoor air, light and water, or force them to evacuate when their suites become unbearable. The growing aging population demographic is especially vulnerable to being stranded if elevators fail in high-rise buildings.

Floor-to-ceiling glazing — so what’s the problem?
Condo buildings tend to be covered in floor-to-ceiling glazing — a strategy that would not have been advanced without the privilege of cheap energy, especially if the builder was responsible for energy costs past the point of sale. Homebuyers want — or think they want — oversized windows because otherwise the units would feel like cramped, dark caves. The more sensible alternative to have larger suites with more exterior wall exposure with punched windows, as in traditional apartment buildings, is not as profitable when it comes to selling the units.
But we know from daylighting theory that beyond about a 40% window-to-wall ratio (WWR) there is only a marginal improvement in how much daylight is available inside the unit. What’s more, we conducted a long-term photographic study of a so-called fully glazed building in Ottawa and found that the window shades were typically closed 60-85% of the way on average. In a neighbouring building with reasonably sized punched windows (about 30% WWR) people keep the shades closed only half as much. This begs the question: why are we building condos with these expansive, seldom-used, window walls?
Windows are typically less than 20% as insulating as opaque walls. This means they transfer heat about five times as quickly as walls and become the weakest link in the building envelope, especially when mechanical systems fail to operate. From a comfort perspective, a little understood fact is that building occupants are very sensitive to surface temperature because of the radiant heat loss from our bodies to these surfaces.The sensed operative temperature is about half influenced by surface temperature and half by air temperature. So without a steady stream of cooled or heated air aimed at the fully glazed exterior walls, the perimeter of fully glazed condos may not be comfortable enough to enjoy — particularly with low-performance windows.
How do these fully glazed buildings pass through energy codes? The answer is: loopholes that violate the spirit of the codes. The first loophole is a prescriptive path that limits the overall building window-to-wall ratio, but does not prevent windows from being poorly positioned from a comfort or energy perspective. The energy and comfort implications of positioning all the glass in principal rooms are grave. In a field study of 20 condos across Ottawa, we found that a common complaint was that glazing was inappropriately positioned within units.3 One fully-glazed bedroom was so cramped that the homeowner had to brush up against frigidly cold glass to get into bed. Another had a fully-glazed bathroom with a toilet that was like a throne positioned to address the masses below. The more common loophole to achieve expansive window areas that are not permitted under the prescriptive path is to use the performance path, since it allows the use of high-efficiency HVAC and lighting to trade off against poor efficiency building envelopes. As we will see later, this approach exacerbates the resilience problem.

Thermal bridging makes
things worse
Contrary to common belief, glazed sections of condos are not the worst for thermal performance. At least they contain a continuous thermal break — in the form of a gas fill between the glass panes. In contrast, perimeter metal framing and concrete slabs often extend right from the “warm” side to the cold side of a wall, as illustrated in Fig. 1. A comprehensive study4 by Morrison Hershfield showed that current modelling methods greatly overestimate the insulating efficiency of typical window/wall constructions in condos. As a result, homeowners, tenants, and society as a whole, shoulder the burden of a large stock of condos that perform much worse than the code intended. Sadly, 21st century condos do not perform any better than the stock of 1960s and 70s high-rise apartment buildings. What other consumer product has not advanced in its energy performance over the past 50 years?
Aside from the everyday energy and comfort implications of poor envelope design, underwhelming resilience should also be of great concern. Resilience is a virtually neglected concept until disaster strikes as it did during Toronto’s long ice storm and power outage of December 2013. Even if this ice storm did not directly cause death from exposure to cold, there were reports of carbon monoxide-caused deaths because people started generators or barbecues in their garages. 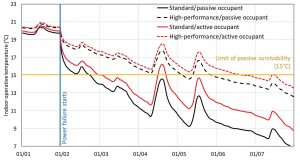 Passive survivability — two condos compared
One of the most relevant building resilience metrics is “passive survivability” (PS). PS is the length of time that a condo, or any type of building, remains between 15 and 30°C after a power or system failure. PS is best evaluated during the coldest and warmest periods of a typical year, which happens to be when failures are more likely to occur anyway.5
Building performance simulations are a useful tool to evaluate passive survivability because design mistakes are not expensive to identify as we can test artificial scenarios before real disaster strikes. But in reality, the vast majority of simulation use worldwide is to demonstrate code compliance — an application which rarely influences design.
To demonstrate passive survivability, we examined two south-facing condo designs in Toronto (standard and high-performance) and two occupant types (passive and active). The standard design has a window that takes up 80% of the exterior wall (south-facing), and the remaining wall meets code minimum requirements if traditional, one-dimensional heat transfer paths are assumed. The high-performance condo has a 40% window-to-wall ratio with triple-glazing and thermally broken window frames and balcony. Both units have a two-metre deep balcony that extends the entire width of the unit. The active occupants open and close the operable windows and the reflective interior shades. The passive occupants do little to improve their comfort, and standard modelling assumptions are made about how they behave.
We looked at these two condos’ operative temperature response over one week starting January 1. The weather was cold and fairly cloudy, though there was some useful solar radiation a few days later. The results shown in Figure 2 show the operative temperature response in the condo for the four combinations that result from the building envelope and occupant types.
The metric shows that the high-performance unit retains heat more than two days longer compared to the standard unit — regardless of the occupants’ activeness. The difference on the first day in particular is quite significant in that the high-performance unit remains above 17°C — a temperature which many frugal homeowners use as a standard heating setpoint.
One of the most profound findings of our research is the significance of providing occupants with ample opportunities for adaptation, which tends to rival the importance of a high-performance envelope. Operable windows, effective window blinds that can control solar gains through favourably oriented windows, and the possibility to bundle up or strip down, greatly alleviate discomfort and improve passive survivability. These features are simple to offer, and yet they are often overlooked. Instead, the typical current situation is that windows open only slightly, window blinds are selected for aesthetics rather than their ability to reject solar gains, and fishbowl-like condos preclude stripping down for all but a minority of exhibitionists. The interested reader can find more details on this simulation in the published study.6

What do we need to do next?
It is not prudent to engineer buildings where passive systems (building envelopes) are compromised by trade-offs against active systems (HVAC, lighting, etc.) because only passive systems provide shelter when power outages occur. Building performance simulations can help designers provide a reasonable level of resilience by supporting them in improving passive survivability while greatly enhancing thermal comfort.
As we move toward a low carbon economy and adapt to climate change, engineers should advocate for positive changes that make for more resilient buildings, such as:
• Promoting measures for resilience in building codes;
• Imposing more rigorous heat transfer modeling through facades, such that thermal bridging is not neglected and the effective thermal resistance of assemblies informs design decisions;
• Eliminating loopholes that allow violations of the spirit of the code, such as trading off building envelope efficiency against HVAC and lighting systems efficiency.
• Educating homebuyers about building performance and the resilient features to seek out; also educating them on how to manually control window blinds and operable windows to their full potential; and
• Designing buildings to be more usable and operable so that occupants do not helplessly and passively try to cope with discomfort or even dangerous conditions.
Given Canada’s population growth projections and future trends for urban intensification, we will see thousands of MURBs constructed in cities across Canada during the 21st century. It is critical that we improve the quality, energy efficiency and resilience of what will become the dominant form of housing for city dwellers so that this stock of housing becomes a legacy, not a liability.cce

Liam O’Brien, P.Eng., Ph.D is an associate professor in Civil and Environmental Engineering at Carleton University where he runs the Human Building Interaction Lab. Ted Kesik, P.Eng., Ph.D., is a professor in the Daniels Faculty of Architecture, Landscape and Design at the University of Toronto.