Watching a bubble drifting through a glass of champagne, it surprises me that something that small could cause so much trouble. It is not immediately obvious to most of us that a bubble could cause a ... 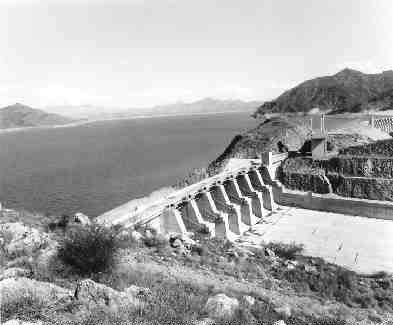 Watching a bubble drifting through a glass of champagne, it surprises me that something that small could cause so much trouble. It is not immediately obvious to most of us that a bubble could cause a destroyer to flounder at sea, could cause the failure of one of the world’s largest dams, and even, according to some, could cause two nuclei to be joined in a fusion reaction. I catch myself wondering if the only person who cares enough to lament about “Tiny Bubbles” is Don Ho. And even he is not doing much of that lately.

It was Daniel Bernoulli (of Bernoulli theorem fame) with some help of Leonhard Euler (of Euler Number fame) who in about 1738 realized when the velocity in a fluid is increased, the pressure in the fluid decreases. In fact, the sum of the pressure and velocity in the flowing fluid remains constant, in most cases. If you take away from one pile, you must add to the other. This is the basis for the Bernoulli theorem which is versatile enough to be used to for designing plumbing, jet fighters or artificial hearts.

If we keep increasing the velocity, the pressure will continue to decrease until … until what? Until it gets to zero? But what if we continue increasing the velocity? Could the pressure in the water become negative? Could flow of the water itself create a situation where the water was under negative pressure? The answer is yes. In fact, according to the work of Monsieur F. Donny in the 1860s, liquids are capable of sustaining considerable tensile (negative pressure) forces. Pure, still water can support tensile forces up to 5,000 kPa (700 psi). So under certain conditions liquids can be stretched and not break. However, according to M. Bernoulli, high flow rates can also put considerable stress (or “negative pressures”) on the liquid. Experience has shown that when you have dynamic and opposed forces, sooner or later something has got to give.

Which brings us to Her Majesty’s Ship, the destroyer Daring. Trials of the vessel were taking place off the coast of England in the late 19th century, with disappointing results. The naval engineers who designed the ship had provided enough horsepower to propel her at 27 knots, but the ship was attaining nothing near that speed. Barnaby and Thorncroft determined in 1895 that the conditions around the propeller were such that there was a negative pressure in the water. Clouds of water vapour formed around the propellers as they spun. With nothing to push against, the massive engines thrashed the water uselessly, leaving trails of bubbles behind. It was the eminent naval architect of the time R. E. Froude (whose Number is used by ship-building types), who first described this phenomenon as “cavitation.” Cavitation is the formation of bubbles as a result of low pressure in a liquid, often water.

Cavitation has been an important and costly consideration in many situations–one that is particularly memorable. In the late 1960s, the World Bank sponsored a portion of the construction of the world’s largest dam at Tarbela, Pakistan.

After several years of construction, in August 1974 the time had come to fill the reservoir. This was done by closing the tunnels that bypassed the dam. Tarbela being a very big dam, its tunnels were also very big. Each was 14 metres in diameter, wide enough to hold four lanes of traffic. When it came time to close the last tunnel, two of the three massive gates closed completely; the centre one did not. Due to a problem with retaining bolts supporting the rails on which the gate operated, the gate got stuck. It remained partly open and would not budge.

With all the other gates closed, the considerable pressure of the filling reservoir forced the water through the open gate at high speed, estimated at 250 kilometres an hour. The result was cavitation in the tunnel on a grand scale.

Once past the restriction at the partly open gate, the water slowed to fill the expanse of the tunnel. This process caused the bubbles to collapse violently as the pressure was recovered. As each bubble collapsed it produced shock waves, similar to an explosion (an implosion, actually). And water is an excellent transmitter of this type of disturbance. Sound travels far and quickly in water. The conditions at Tarbela caused billions of explosions to take place very close to the brittle concrete supports of the tunnel.

In a few days the 2-metre thick reinforced concrete lining of the tunnel was completely destroyed. Surrounding sub-surface water entered the tunnel, exacerbating the problem. Huge portions of the weakened concrete were torn from the walls and carried downstream in torrents of water. As you can imagine, the repair costs were astronomical.

Anywhere liquid is flowing there exists the possibility of cavitation. In hydroelectric projects this problem can occur not just in the special conditions achieved at Tarbela, but in the turbines as well. Its effects can be mitigated by the use of impact resistant materials like titanium, ceramics, or some aluminum alloys. Cavitation is caused not only by high flow rates, but also by the high local velocities found in turbulence. Turbulence can be generated by the liquid taking sudden changes in direction or flowing past sharp edges.

But as with all destructive forces in nature, attempts have been made to harness cavitation’s power for good. Scientists have observed light emitted by the collapsing of a cavitation-produced bubble in water. This emission of light has been estimated as amplification in energy of 11 orders of magnitude. It also has been estimated that at the centre of the collapsing bubble the pressure can exceed 150 kPa (1,000 psi) and the temperature reach 5,000 degrees Kelvin. Normally it takes a great deal of energy and expensive equipment to achieve these conditions. We now know that using cavitation, they can be achieved using a stream of liquid–even plain old water.

Some believe that cold fusion is still possible using cavitation. (Cold fusion is the joining of atomic particles to produce energy without having to visit the sun or build a gigantic particle accelerator.) When it comes to difficult but desirable chemical reactions, cold fusion is at the top of the heap. Of course, not everyone believes it is possible. But just in case, the University of California has a patent issued in 1997 for cold fusion using cavitation, 140 years after the trials of HMS Daring.

Is it possible that the same phenomenon that makes our knuckles crack could be used for cold fusion? Possibly. There can be little doubt that cavitation could be a consideration for all kinds of designers, from those making artificial hearts to hydroelectricity. And if you need additional inspiration there is always Don Ho on vinyl.