Ballasts — from bricks to beauty

There are few things in the world around us that have not been affected by electronics. Artificial lighting is no exception. When High Intensity Discharge (HID) and fluorescent lamps were introduced i... 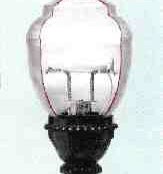 The Icetron lamp and ballast system by Osram Sylvania uses magnetic induction technology instead of an electrode at each end of the fluorescent tube.

There are few things in the world around us that have not been affected by electronics. Artificial lighting is no exception. When High Intensity Discharge (HID) and fluorescent lamps were introduced in the 1930s, they were the first significant improvement on Edison’s incandescent lamp. Now, in the 1990s, the application of electronics has led to unprecedented levels of lighting efficiency and has brought an elegance to the control of lighting systems.

For 50 years the fluorescent lamp relied upon a magnetic ballast: a device which has been referred to as a brick because of its size and weight. The heart of the ballast was a transformer-like device consisting of a laminated steel core and copper or aluminum windings. The ballast performed two functions that had not been required by the incandescent lamp but which were essential to the operation of both the fluorescent and the HID lamp. The ballast supplied the relatively high voltage that was necessary to establish an arc between the two electrodes. Then after the arc was established, the ballast regulated the current flowing through the lamp. In the absence of some form of current regulation the lamp would quickly self-destruct because of its negative-resistance characteristic.

The pre-eminent position of the magnetic ballast for the control of fluorescent lamps was threatened by, and finally lost to, the electronic ballast which was introduced in the 1980s. The characteristic that ensured victory for this newcomer was its higher energy efficiency which was achieved in three ways. First, elimination of the core and coil reduced electrical losses. Second, the electronic ballast usually operated in the frequency range of 20 to 60 kHz instead of the 60 Hz of the magnetic ballast. At these higher frequencies fluorescent lamps are more efficient in their conversion of electrical energy to light.

The third advantage was that by generating less heat, the electronic ballast imposed a reduced load on building air-conditioning systems. The time was right; international awareness of the need to reduce energy consumption was at its height. In Canada, a combination of more demanding regulations and provincial incentives resulted in building owners, lighting manufacturers and consulting engineers searching for greater efficiencies in the lamp-ballast combination. The following estimated numbers show that the potential for energy reduction is staggering. Over 20% of the electricity generated in North America is used for lighting. Lighting accounts for 40% of the average commercial electricity bill. Seventy million ballasts per year are sold in North America. Electronic ballasts are about 30% more efficient than magnetic ballasts.

Energy efficiency is only one of electronic ballasts’ many benefits. High operating frequencies give virtually flicker-free illumination and improved colour rendering. Lamp life is extended and cold-weather starting improved. Lamp failures can be detected and consequential surges in electrical power can be controlled. Systems are available that maintain a constant lighting level despite changes in the electrical supply voltage or aging of the fluorescent tube. Direct current operation makes it possible to operate fluorescent lamps from emergency power supplies and, because the current draw is low, to extend the life of a standby battery. As well, electronic ballasts readily interface with external control systems to achieve manual or automatic dimming and make lighting part of a central energy management system.

And what does the future hold? It seems reasonable to expect further improvements in ballast efficiencies. These continue to be pursued by building owners and managers, and are in great demand by users such as mining and shipping companies which use batteries as a major source of electrical energy. As well, intelligent control systems are likely to become more sophisticated.

But perhaps the most exciting prospect comes from the reduced size, weight and heat dissipation of the electronic ballast. Fluorescent lamps complete with built-in ballasts are already available as direct replacements for incandescent lamps. A lamp as small as 1/4″ diameter is now on the market and lamps of this size can only be driven by an electronic ballast. Moreover, such a lamp demands a tiny ballast if the latter is physically not to overwhelm the lamp.

A recent introduction is the induction fluorescent lamp which has no electrodes but uses a high-frequency magnetic field to impart energy to the vapour within the lamp. The high frequency field is generated by a special electronic ballast. The manufacturers claim it has a lamp life of 100,000 hours. The induction lamp is particularly attractive in locations where lamp replacement is expensive or dangerous such as high ceilings and vehicle underpasses.

Clearly lighting fixture designers are being freed from the restraints of ugly and cumbersome ballasts–another engineering contribution to the fields of art and beauty.