“What was interesting about this building in northern Ontario was the close integration of the acoustic design with the construction. The acoustic engineers’ expertise provided natural acoustics inside courtrooms that are open and daylit, unlike the typical heavily insulated “black box” environments.” – Jury 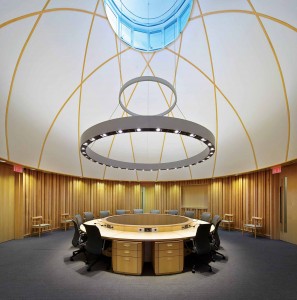 The Thunder Bay Consolidated Courthouse embodies the permanence and civic authority of the traditional courthouse. Modern day courtrooms have been designed as black box theatres, where there is little to no natural light or natural acoustics. In contrast, the Thunder Bay Courthouse, which opened in Spring 2014, has natural light in every courtroom as well as in its open public spaces.
Aercoustics Engineering’s role was to optimize the space to enhance the natural acoustics in the building. The key acoustical innovation was to employ design parameters that are used for performing arts centres.

Reverberation vs. “dead” spaces
Typically, when courthouses are designed the focus for interior acoustics relies on a single parameter: the reverberation time. Reverberation time generally indicates the amount of “echo” in a space. Traditional courthouses were built using stone and marble, providing a high reverberation time that allowed for unamplified speech to easily project across the courtrooms.
In contrast, most modern courthouses are acoustically “dead” spaces with low reverberation times and they must rely on amplification. Courtroom design migrated to this type of environment because of the need to incorporate audio visual equipment and recording equipment.
To achieve natural acoustics in this modern structure, Aercoustics used an innovative approach. The engineers designed for a higher reverberation time, but also considered additional acoustic parameters such as D50 (distinctness) and acoustic strength. As a general rule, achieving a ratio greater than 50% (D50) ensures good speech intelligibility. The second parameter, the acoustic strength (G), is a measure of how loud a space may be. By relying on the reverberation time, D50 and the acoustic strength, the engineers were successful in optimizing each of the courtrooms to allow for uniform and excellent speech intelligibility.
The approach was a complete departure from existing guidelines. As a result, the amount of acoustic absorption materials needed in the Thunder Bay courtrooms is far less than the requirements of the Ministry of Attorney General’s design guidelines.
Aercoustics worked with Adamson Associates Architects to strategically develop the acoustic design elements. For example, as this building was a steel structure, Aercoustics had to specifically determine the concrete thickness for the floor and ceiling assemblies to ensure the sound isolation and vibration response were sufficient for the courtrooms to function.
The design and construction was so effective that when Aboriginal drumming was performed in the atrium during the ribbon cutting ceremony for the building, the sound could not be heard inside the courtrooms.

Aboriginal Conference Settlement Suite
The most challenging space by far was the Aboriginal Conference Settlement Suite. The first in Ontario, the suite was designed with input from elders and leaders within the aboriginal community. It is designed to respect and acknowledge aboriginal traditions and encourage the healing process.
The suite is a circular room with an elliptical domed roof. The circular plan, with seating in the round, means that speech could originate from any point in the room. This can create a negative effect known as ‘“whispering” where the acoustical energy is focused in “hot spots.”
Aercoustics developed a customized 3D model for this space that simulated the sound waves and allowed them to determine exactly where the focal points would occur. The key was to create a customized diffusive wall along the circular portion of the wall. Diffusion essentially allows for the sound wave to scatter. The wood panel included a geometric relief to create a more dispersive and diffuse reflection.
As a result of this work the engineers went on to develop software tools and did further research involving the theory of sound diffusion.
The vibrant acoustic quality of the Thunder Bay Courthouse creates an environment which is less stressful and less oppressive, given the sombre and sobering use of the space.
Crown Attorney, Dan Mitchell, said, “Quite frankly, I think this building elevates the spirit, with the light and the spaciousness.”