“We liked the fact that the funding clients used Canadian engineering expertise for this project in a struggling sub-Saharan country. The engineers provided eight cities with master plans for their water needs for the next 20 years, and they oversaw construction of one system. The solutions were appropriately designed to be low-maintenance.” – Jury 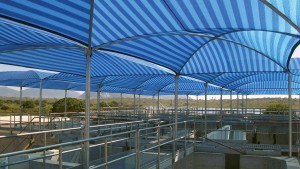 Half the population of Mozambique lives in poverty despite strong economic growth since it emerged from a devastating three-decade civil war in 1992. Improving the population’s access to water is a key element of the government’s plan for improving their situation.
This project increased the accessibility to reliable and good quality water for eight cities in Northern Mozambique. Between 2009 and 2013, Burnside led a team that completed feasibility studies, drew up master plans and then completed detailed designs for each city. Finally, the team oversaw the construction of upgrades in one of the cities, Nampula.

Remnants of infrastructure and scarce supply
In most of these cities, the existing water systems consisted mainly of remnants of infrastructure constructed before 1970. The scarcity of reliable water sources in this seasonally dry Pre-Cambrian environment heightened the challenges.
The team conducted site investigations and gathered first-hand socio-economic, financial, water and environmental information to understand the situation and what could be done to improve it.

Construction in Nampula
The construction of water infrastructure in Nampula doubled the supply of water to the city, from approximately 40 litres to 65 litres per person per day. The new system increased the access to a quality water supply from 52% to 64% of the population and extended it to a large segment of the population who live in a 20 square kilometre area southeast of the city.
The construction provided about 400 full time jobs and infused about US $25 million into the local economy. A separate parallel project was also implemented by the government to improve sanitation and drainage and to mitigate the impacts from the increase in water use.
For people whose dwellings, crops and ability to derive a livelihood were impacted, a relocation and compensation was provided. Most benefited from “better than before” improvements or replacements to their property.

Passive and proven technologies
The challenge of maintaining mechanical components in water treatment plants is exacerbated in countries such as Mozambique due to the lack of access to technical support and equipment. To mitigate these issues, Burnside implemented passive systems. Flocculators, similar to those in use in Canadian plants (e.g. Ottawa and Toronto) were used instead of mechanical systems, and inline static mixers were used instead of electric motor-driven rapid mix units.
The plant’s electrical control and SCADA systems were also based on well established technologies that have been used in water works of similar size in Canada. At the same time Burnside incorporated equipment that is commonly supplied and serviced in Southern Africa.

Multicultural “Canadian” approach
The inclusive project management and team building styles prevalent in Canada can be unfamiliar in cultures where autocratic management styles prevail. Burnside’s in-country project team include individuals from several nationalities and there was a consistent effort to apply the multicultural “Canadian” approach to build an effective consultant team.
The local staff was trained in administrative tools and in the virtual management of project documents, which helped to integrate the work of the in-country office with that of the home office in Canada. These tools were particularly useful in processing contractor shop drawings, payment certificates and statement of claims.

Saving lives
The project was funded by the Millennium Challenge Corporation of the United States. Their involvement raised the bar for the environmental and health and safety practices compared to accepted practices in the region. For example, a two-cell sedimentation lagoon was constructed to treat the treatment plant’s backwash before it is discharged. Temporary and permanent erosion control works were also built.
The World Health Organization estimates that every dollar invested to improve drinking water supply in Sub-Saharan Africa yields an average economic benefit of at least $2.50. Bottom line? It brings improvement to the quality life and ultimately it saves lives.