“The flood situation that Calgary dealt with in 2013 was unprecedented. The engineers developed a creative modelling technique for mapping the changed conditions on the Bow and Elbow Rivers, which allowed the city to better plan its responses to future events. A lot of future resources will be tied to this activity.” – Jury 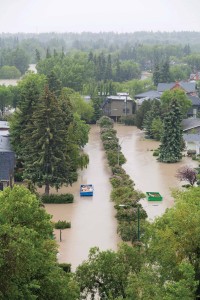 In June 2013, large scale flooding occurred in southern Alberta. Thousands of people were displaced from their homes, residential and commercial property was damaged, and four people lost their lives in what was the worst flooding in southern Alberta in decades.
Amid the extensive recovery efforts, the City of Calgary asked Golder Associates to update its flood maps as a tool for managing future floods.
Golder had previously (2009 to 2012) conducted comprehensive surveys of the rivers in Calgary and produced one-dimensional hydraulic models to update flood maps. The floodwaters of 2013, however, rearranged the river beds, moved material on a large scale, and eroded banks and shorelines. In some cases the floods had altered the river alignment.

City needed high quality data
The city required high quality data to ensure accurate hydraulic modelling.
Typically, one-dimensional models are based on surveys conducted at cross-sections at regular intervals (for example every 200 metres along the river) under the assumption that a series of cross-sections provides a representative approximation of the channel geometry.
However, the city planned to use the data generated by Golder for other applications that require bathymetry (the shape of river beds, ocean or lake floors) along a continuous path. The project required the interpolation of continuous bathymetry along the Bow and Elbow Rivers.
Though anisotropic (directed) bathymetry interpolation is available off-the-shelf as part of hydraulic modelling packages, these tools interpolate between cross sections and take into account only the general alignment of a river. This results in a bathymetry surface that is unable to be seamlessly integrated into the terrain surrounding the river.

Fishnet modelling
Research revealed that there was no existing tool capable of creating the high-quality data that the city required. Golder needed to rethink the existing method of data interpolation.
As a result, Golder devised and applied a technique that previously had only existed in theory. It was realized that a fishnet pattern would more accurately fit on a continuous irregular path like a river.
The approach proved to be the solution. By using a fishnet method (a grid with lines drawn in longitudinal and cross-river direction) that was fitted in the river channel, it was possible to create a continuous dataset. Golder created a custom interpolation method and implemented the approach as a GIS-based tool. With this latest advancement, the quality of data produced by the fishnet interpolation method allows for more accurate modelling.

Benefits for flood mapping,
fish habitats, bank stabilization
The project has contributed to more sophisticated flood maps which help the city to predict which areas will be affected by floodwaters at a given amount of rain and snowmelt. Today, thanks to this project, the City of Calgary can better plan long-term flood mitigation strategies and tactics, and put additional emergency response measures into place.
The results of the fishnet interpolation method can also be used in applications such as the mapping of fish habitats. Also, with a better understanding of flow velocities, river engineering such as the development of bank protection, protecting against scouring (deep erosion forming holes), bank failure and erosion, is possible.