“The complexity of designing a runway on top of a tunnel to accommodate the new large aircraft was impressive, especially as there were no Canadian codes or standards for it. They also introduced LED lighting for the Category IIIA runway — a first in North America.” – Jury 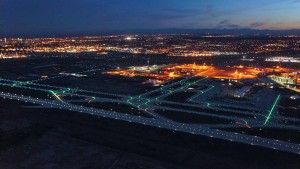 The Calgary Airport Authority needed a new runway not just to expand its capacity for flights, but also to handle the world’s largest aircraft, Code F aircraft, the Airbus A380 and Boeing B747-8. Concurrently, the City of Calgary wanted a tunnel under the runway in order to improve traffic flow in the northeast quadrant of the city and to allow for the possibility of a future light rail transit line.
Prime consultants Associated Engineering and CH2M completed these two large, complex projects simultaneously on the same site for these two clients. They worked closely with the program manager, AECOM and Hatch Mott MacDonald on a tight schedule, completing the work in spring 2014.

Structural loads, runway lighting, tunnel fire protection
The runway is the longest in Canada: 4,270 metres long by 60 metres wide. The six-lane tunnel under the runway is 620 metres long. Also, two taxiway underpasses are 32 metres wide by 61 metres long and 13 metres wide by 166 metres long.
Determining structural design loads for the tunnel and underpasses was a challenge since this information is not part of Canadian codes and standards, and few structures are exposed to such high loads. The use of complex finite element analysis models allowed for the design of reinforced concrete structures that will support the worst case static and dynamic loading scenarios, including the Airbus A380’s 600 tonne loading. More than 85,000 cubic metres of concrete and 16,000 tonnes of reinforcing steel were used to build the structures.
The runway incorporates a Category IIIa runway landing system, which allows uninterrupted aircraft operations at visibility limits down to 200 metres. The team substituted energy-efficient LED lights for the specified runway lighting, marking the first use of LED lights for this type of runway in North America. The system includes more than 5,000 runway and taxiway lights with over 700 kilometres of airfield power cables. Using LED lights for all the airfield lighting reduces energy costs by more than 50 per cent.
Special fire safety systems were used to satisfy the safety requirements in the tunnel. Additional concrete cover was provided, and a cementitious product was also sprayed on the ceiling to provide for increased resistance to fire and intense heat that could be generated by a catastrophic motor vehicle accident. An innovative Very Early Smoke Detection Apparatus system monitors air quality and automates exhaust fan controls. As well, CCTV cameras alert operations staff to assist with motorist incidents and provide security.
The airport project included 15 new taxiways, an aircraft parking apron, field electric centre and 11 kilometres of service roads.

Scheduling and other issues
• Segments of the tunnel had to be completed at set milestones so that the runway and taxiways above could be built within their tight construction schedule. Accelerated design and work packages allowed construction to begin during design.
• An innovative formwork system consisting of four separate sets of travelling forms mounted on rails was installed along the length of the tunnel in order to meet the aggressive, fast-track schedule.
• To suit the Calgary climate, a custom concrete mix was developed that could be placed quickly and was not prone to degradation from freeze-thaw.
• An advanced earthwork model was developed to manage 8.1 million cubic metres of earthworks and optimize the use of on-site materials.
• A life cycle cost assessment was completed to evaluate alternative pavement systems for the runway and taxiways.
• Variable, unpredictable geotechnical conditions and wet weather and flooding challenged construction. The engineers worked with the contractors to maintain progress and pavement quality.

Reusing materials and protecting the watershed
Environmental measures included recycling and reusing existing materials, such as using asphalt millings from an existing road and excavated rock as the road base. Also, the use of rigid Portland cement concrete pavement versus flexible asphalt pavement resulted in 74 per cent less material being imported to the airport site.
A dry pond was created to protect the natural watershed from silt-laden stormwater run-off from the runway and tunnel. The city and the Airport Authority have agreed to do long-term monitoring of the dry pond’s performance.