“The consulting engineers donated financial support and their professional knowledge and personal time to an archaeological excavation at the Siksika Nation Site in Alberta. We found that this project was an interesting way of building relationships between the public and First Nations. And it provided valuable experience for the university students.” – Jury 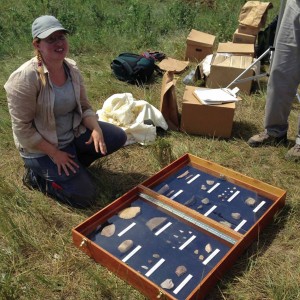 From July 10 to August 14, 2014, members of the public had the opportunity to participate in an archaeological dig at the Blackfoot Crossing Historical Park on the Siksika Nation site near Cluny, Alberta. Golder Associates provided financial and volunteer support for the University of Calgary’s Public Archaeology Program on the site and in the lab.
Golder’s contributions greatly enhanced this opportunity for Albertans and members of the Siksika Nation to work alongside the university students. They helped participants to make important Canadian archaeological discoveries and learn about Alberta’s First Nations’ culture and history. As well, the firm’s assistance supported an application (still under consideration) to obtain World Heritage Site status from the United Nations Educational, Scientific and Cultural Organization (UNESCO).
Volunteers didn’t need previous archaeological experience to join the program: on-site training in archaeological excavation techniques was provided by University of Calgary graduate students and Golder staff. Only six volunteers at a time could work on the site due to the equipment and space constraints. During the six weeks of excavation, 87 volunteer participants contributed a total of 97 person-days of excavation to the program.

Caring for the past
The Siksika Nation enthusiastically supported the work and encouraged young Siksika Nation members to participate in the dig. The volunteers found bone and other food residue, suggesting that past occupants of the site ate bison, dog and other small and large mammals.
All artifacts found are the property of the Siksika Nation and, ultimately, will be stored and displayed at the Blackfoot Crossing Historical Park Interpretive Centre.
The Public Archaeology Program received media coverage from regional newspapers, television news (CBC, CTV, Calgary Herald), as well as on social media. Due to this favourable coverage, there was considerable interest among members of the public wanting to volunteer for a day or more. Even though participants had to drive for an hour to the dig site and pay a registration fee, the program was booked to capacity during the summer of 2014.

Golder digs in
Convincing Golder’s senior consultants of the benefits of involvement in this program was the first step. Once the firm’s Cultural Sciences Group was committed to the project, Golder technical specialists had to make sure the University of Calgary had knowledgeable students who could help educate and lead volunteers with no prior experience to participate effectively in the archaeological dig.
Golder’s approach went beyond the minimum requirements expected for supporting the program. The firm’s archaeology consultants volunteered their time to lead public education discussions at the site about the archaeological process. They offered professional advice for site conservation and coached the participating students and volunteers. The Golder volunteers also promoted the archaeological program within the firm and with clients through a newsletter and social media.
During the autumn of 2014 the program continued off-site with laboratory and museum work that introduced Siksika Nation students and members of the public to archaeological opportunities in Alberta and the rest of Canada.