“The project was a great example of the transfer of knowledge to the local community, and the positive socio-economic impact on the region, thanks to the reduction of travel time from Jammu & Kashmir to Punjab by over four hours was impressive.” –Jury

From the October/November 2017  print issue of Canadian Consulting Engineer, p. 31 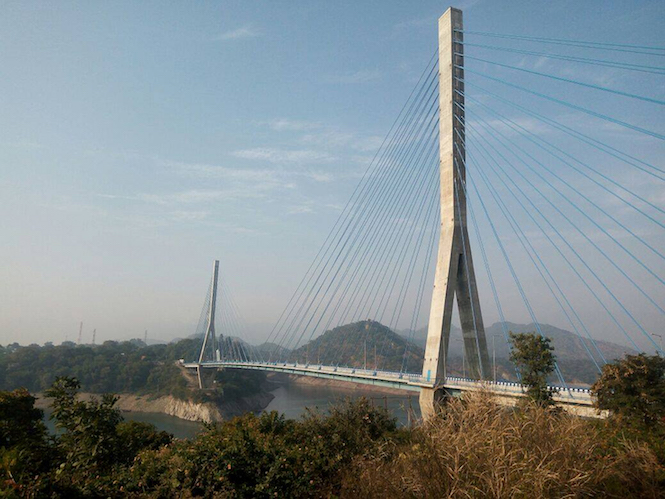 The Atal Setu Bridge project is the first cable-stayed bridge procured under a design-build contract in India by the Border Roads Organization of the Ministry of Defence. The bridge traverses the River Ravi and connects the states of Punjab and Jammu & Kashmir, creating a critical link for the communities on either side of the river and emergency response access to the Kashmir Valley.

McElhanney was responsible for the detailed design, construction engineering, and site support. Developing a cost-effective design suited to the difficult site conditions that could be built smartly were the main goals.

For high seismic regions, diamond-shaped towers are favorable but difficult to build due to the inclined legs. McElhanney’s team developed modified diamond-shaped towers, which meant bringing the tower legs above deck together to a common point just above the traffic clearance envelope to merge into a single vertical cantilever leg. This vertical leg is simpler and faster to build than two inclined legs and it permitted superstructure cantilevering concurrently with tower construction.

By connecting the cables to the central vertical leg, a rigid cables-deck triangle resulted that provided aerodynamic stability against twisting effects. With the tower and cable configuration aiding in the wind stability, the main span could then be engineered as a lightweight edge girder system, easier to fabricate and erect than stiffer box shapes typically used on such bridges.

Most modern cable-stayed bridges have superstructures made entirely of either composite steel or concrete. Taking advantage of the shallow natural terrain on either side of the river, the team could use a combination of cast-in-place concrete for the side spans and lightweight composite steel in the main span, which provided erection advantages and assisted in eliminating uplift at the abutments.

Three sets of intermediate pier props in the side spans helped stiffen the system and reduce demands from wind and live load by over 50%. 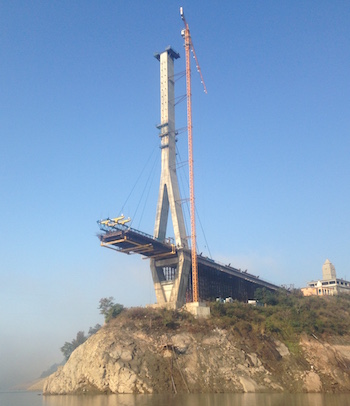 The site has steep rocky banks with large river water level fluctuations that made the transport of materials and erection from the water very difficult. A customized gantry was developed to lift the superstructure steel segments from overhead and hoist them into position from the previously constructed superstructure in a progressive cantilever manner. The material was transported along the side spans, which were completed on falsework prior to the main span cantilevering operations.

Aside from technical challenges, the team faced an aggressive six-month design schedule.

Other factors that increased complexity included a foreign contractor with no previous experience in cable-stayed construction that needed exceptional support, a 12-hour time difference between India and Canada and significant cultural differences.

To mitigate the potential coordination problems, upon award of the project, McElhanney established a project office in Gurgaon, India, staffed with personnel from Canada. The office facilitated better communication among team members, aided in understanding and interpreting the IRC code, and added further support for the client’s proof-checking process performed by IIT Delhi.

The bridge has reduced travel time from Basohli in Jammu & Kashmir to Dunera in Punjab by over four hours and has led to expanded opportunities for previously isolated communities.

Reports already indicate an economic boost from increased tourism activity to the scenic region and the commercial mining of gypsum and limestone.