The 1968 brutalist square concrete building that was home for the Art Gallery of Alberta in downtown Edmonton is no more. Part of the original structure still exists -- 3,437 m2 to be exact -- but it ... 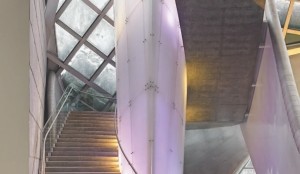 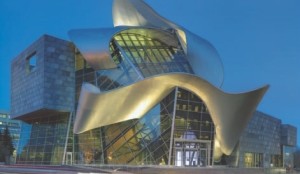 Building in the heart of Edmonton.

The 1968 brutalist square concrete building that was home for the Art Gallery of Alberta in downtown Edmonton is no more. Part of the original structure still exists — 3,437 m2 to be exact — but it is buried within the folds of a dramatic new metal and glass addition. The $88-million, 7,900 m2 (285,000 sq. ft.) renovated building on Sir Winston Churchill Square in the heart of Edmonton opened in January this year.

Designed by an American architect, Randall Stout of Los Angeles, the building is a swirling mass of metal, glass, rounded edges and protrusions. It resembles an organic living creature as much as a building.

The exterior is a combination of patinated zinc panels, fritted glass stretches, and a massive stainless steel ribbon, “the Aurora Borealis.” This 31 x 190-m metal feature threads its way from above the building entrance to inside the lobby and great hall, leading into the galleries.

Derrick Roorda of DeSimone Consulting Engineers of San Francisco, the building’s structural engineers, says that designing such a complex geometric form with its intersecting volumes was a challenge: “But that’s what makes it exciting.”

The primary issue was coordinating different software programs. “We needed to create multiple 3D models, some for performing structural analysis, and others that we provided to the contractors to describe the building geometry,” Roorda explains. “Unfortunately, software today does not allow you to easily make changes in one program and translate those changes to the others.”

Large portions of the original building structure were removed. “Then we dropped some steel columns down through that existing structure in order to support a two-storey addition that sits above the old building,” says Roorda. They had to drill new piles and foundations within the existing basement space.

Because of the multiple sloping steel and glass elements that make up the roof, calculating the snow loads and where the snow would accumulate required a special study by RWDI.

Roorda explains that another challenge was preventing thermal bridging. “We had to come up with a way to allow big portions of the structure to penetrate the building envelope — the large curving metal structure in particular.” The design team worked with the steel fabricators and inserted a portion of wood (oak) in between two steel plates where the structure penetrated the building envelope. The wood element is an insulator and has steel bolts to provide the necessary structural integrity.