Even before he was big enough to see over the dashboard of a car, Andy Savoy, P.Eng., was listening to his father, a highway engineer, discuss the safety aspects of the New Brunswick roads they travel... 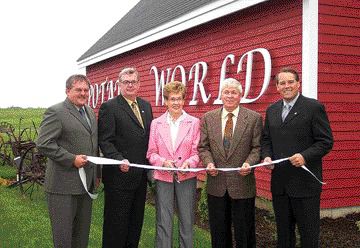 Andy Savoy (far right) at the opening of Potato World, the New Brunswick Potato Museum in Florenceville, N.B. in 2004.

Even before he was big enough to see over the dashboard of a car, Andy Savoy, P.Eng., was listening to his father, a highway engineer, discuss the safety aspects of the New Brunswick roads they travelled together. He absorbed more than a love of engineering from his father; he also adopted the philosophy that one person can make a difference.

So after hearing complaints from the profession about the scarcity of engineers in public office it was natural for him to decide to “walk the talk.”

He ran for municipal office, and was elected to Perth-Andover’s village council in 1989. Then, a mere six weeks before the federal election in 2000, Savoy was approached to run for the Liberals. By that time he was back in his home town of Fredericton working with the Research and Productivity Council. Having worked in construction throughout the region and having played a lot of hockey, he was well known in his riding. But with a grand total of 63 hockey-related stitches in his face, he wasn’t sure if this method of gaining notoriety would help or hinder his political aspirations.

He won the Tobique-Mactaquac seat in “a squeaker,” with a majority of only 150 votes.

His two years in municipal politics had not prepared him for the pace on Parliament Hill, however. “What struck me immediately was how slowly things moved. In [federal] politics it’s all about debating, talking, looking at all the angles, listening to all the interest groups. Anything you do has an impact on millions of people.

“It was a little frustrating at the start for someone used to seeing things on a project by project basis,” he says, adding that one piece of legislation he worked on took nine years to pass.

“At the same time as you’re making laws, you’re trying to represent your constituents, trying to move their issues forward,” he explains. It seems he was particularly successful in this area, and being an engineer played a key role. With his knowledge of transportation engineering, as well as that of the various impacts and spin-off benefits of major construction projects, he was the perfect promoter for improvements to more than 100 kilometres of New Brunswick’s Trans Canada highway. “After [my] 11 months in Parliament, we got $400 million for the project to upgrade the province’s ‘suicide alley’ stretch of highway. There were a lot of areas where I had a huge leg-up on other MPs, most of whom have liberal arts or legal backgrounds.”

During the last two years of the previous government, Savoy was the elected national caucus chair. Leaders of the 15 caucuses of Liberal MPs came to him with their issues every week, and he decided which of these to discuss with the Prime Minister in a weekly half-hour meeting. “This provides a huge opportunity to promote caucus issues, and technical issues were close to my heart,” he admits.

His proudest moment on the Hill, however, came as a response to the natural, engineering and political disaster that was Hurricane Katrina. He decided to host a barbecue to raise funds for Katrina’s victims. His first two calls — to the Canadian Council of Professional Engineers and the Association of Consulting Engineers of Canada — netted $20,000 in donations. The sun shone on the event and he says it raised altogether $125,000.

Although he has been approached to run for provincial office following his defeat by a Conservative Party candidate in the last federal election, Savoy has decided to stay closer to home with his wife and two young children. He’s back in construction and consulting. But he certainly hasn’t ruled out a return to the political arena. Maybe when his son can see over the dashboard of the car, he’ll be ready again to build more of those complex political bridges.

Sophie Kneisel is a freelance writer who lives near Port Hope, Ontario. She is a former editor of Canadian Consulting Engineer.