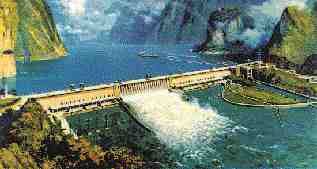 AGRA companies continue to chalk up commissions for the Three Gorges Dam hydroelectric project in China. During federal Minister Sergio Marchi’s trade mission to that country late last year, Teshmont of Winnipeg, a subsidiary of AGRA, announced it had signed a contract to help the China Three Gorges Power Corporation with specifying the 500 kV generator transformers and switchgear for the power station on the dam’s left bank.

Teshmont is already consulting to the Chinese on engineering the transmission system from the dam. Meanwhile parent company AGRA Monenco of Mississauga is providing the project management system for the massive construction works — the biggest in the world. Already under way (the river has been diverted and a powerhouse and ship locks are being built), the project is to cost almost U.S. $20 billion dollars, employs about 25,000 people, and will use 15 million cubic metres of concrete by the time it is completed in 2009.

The Three Gorges project is so controversial that despite its size not many consulting engineers would step into AGRA’s shoes. Indeed, an article in Canadian Business recently, suggested that AGRA risks being targeted by environmentalists as a “corporate pariah” for its role.

The dam harnesses the water power of the Yangtse, China’s longest river and the historical lifeline of much of the country. Located upstream from Yichang City in Huboi province, the structure is in one of the most picturesque spots on earth, where cliffs rise sharply 700 metres from the river. The concrete gravity barrier spans two kilometres across. The powerhouses on each side hold 26 700 MW generating turbines. The dam will raise the water level in the gorge 100 metres and create a reservoir upstream 166 kilometres long. In the process, 13 cities and 28,000 square kilometres of farmland will be submerged, and over one million people, as well as temples and other artifacts, must be relocated.

Aside from concerns about the massive relocations, loss of agricultural land, soil erosion and the effect on wildlife, environmentalists fear that the upstream sections will become silted up due to the slowed water flow.

Dismissing such criticisms, David Paterson, vice president of corporate affairs at AGRA, says “We are confident that everything we are doing is beneficial.” The dam, he points out, is being built primarily to stop the widescale flooding that has plagued the communities and lands downstream for centuries. The floods occur about every five years — the one we saw graphically depicted on television last year was far from the worst. In 1954, for example, floods affected 19 million people and killed 33,000. Paterson explains that the dam will prevent that kind of disaster. And he says that by passing on Canadian technology and expertise to the Chinese engineers (hundreds of whom have visited and worked in their offices in Canada), AGRA is helping to ensure the environmental qualities of the dam.

If Paterson’s arguments sound convincing, they should: AGRA has also been asked to help develop a web site and communications centre to explain the merits of the historic project.