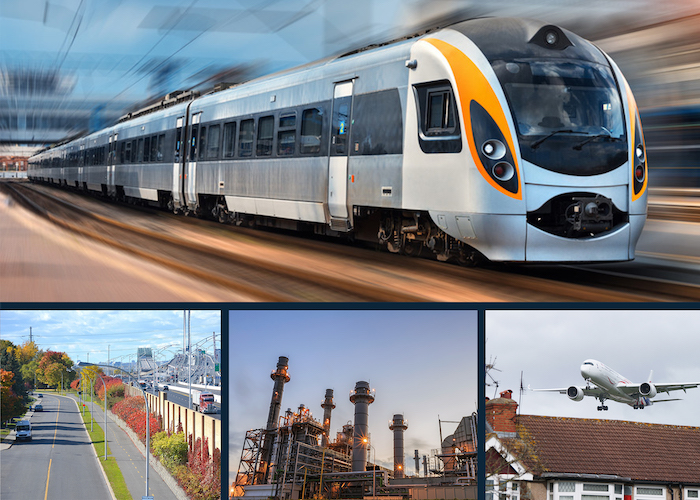 For projects subject to environmental regulation and permitting, engineers are called upon to document the effects of noise on public health and welfare. Indeed, the work involved in acoustical consulting is almost invariably performed by professional engineers.

In Ontario, by way of example, land-use planning studies of new developments’ noise impacts are explicitly regulated by Professional Engineers Ontario (PEO). In Alberta, meanwhile, environmental regulators typically refuse to accept any engineering reports that are not sealed by a P.Eng.

That said, the level of effort to address environmental noise control varies from province to province, while environmental vibration is largely considered on an ad hoc basis. Different approaches are found between federal, provincial and local governments and their corresponding statutory and regulatory imperatives.

Meanwhile, there are a variety of circumstances where lease agreements with government organizations contain provisions for limiting environmental noise, where noise-control mediation is government-ordered and where public disclosure of existing and expected health impacts are not made despite the prospect of adverse effects on people and wildlife. Further, there are varied assessments of the significance of noise, including whether it should merely be viewed as a nuisance factor or more tangible in terms of its health effects.

With that in mind, an overview of such controls across Canada is relevant for consulting engineers registered in multiple jurisdictions.

Noise control is addressed in several ways at the federal level.

Transport Canada uses a Noise Exposure Forecast (NEF) system to help planners manage land use near airports, by measuring the noise of aircraft in their vicinity. The system considers loudness, frequency, duration, time of occurrence and tone, among other factors.

The Canada Transportation Agency (CTA) investigates public complaints about railway noise and vibration, with the expectation the complainants, railways and municipalities will work together first to arrive at a resolution.

The Impact Assessment Agency of Canada (IAAC), meanwhile, determines if a project is within its regulatory jurisdiction and requires noise and/or vibration studies. Other federal bodies defer to its mandate.

Among these bodies, the Canada Energy Regulator (CER) addresses noise emanating from oil and gas projects, while the Canadian Nuclear Safety Commission (CNSC) does the same for noise and vibration issues relating to nuclear power plants.

Ontario’s Environmental Protection Act (EPA), passed in 1990, defines ‘contaminants’ to include sounds and vibrations “resulting directly or indirectly from human activities that causes or may cause an adverse effect.” This statute has resulted in the regulation of noise under the NPC-300 Environmental Noise Guideline, developed by Ontario’s ministry of environment and climate change (MOECC).

Projects throughout the province that are assessed with reference to this guideline must secure an Environmental Compliance Approval (ECA) before further permitting at the local jurisdictional level. The process of securing an ECA includes the submission of an Acoustic Assessment Report (AAR), review by the provincial regulator and completion of an Acoustic Audit to document real-world conformance with the prescribed limits on sound levels within NPC-300, which defines four land-use zones to characterize receptors.

Much as the ministry of transportation addresses provincial highways through its Environmental Guide for Noise in terms of their effects on residential receptors, the permitting of new developments across the province typically considers noise through the land-use planning process. Plans to construct new residential communities in proximity to existing properties and infrastructure like railways, highways, airports and industrial sites with notable noise emissions are assessed to determine if compliance with the criteria of NPC-300 is feasible.

In Alberta, noise is addressed by Directive 038, which the Alberta Energy Regulator (AER) applies to oil, gas, coal, chemical and fertilizer plants, refineries, electrical generation and related industrial facilities, and by Rule 012, which the Alberta Utilities Commission (AUC) applies to gas utility pipelines, hydroelectric developments, power plants, substations and transmission lines. The criteria and procedures are virtually identical, focusing on nighttime noise and applying to areas where people sleep.

In British Columbia, the ministry of transportation and infrastructure regulates highway noise with its Section 1600 Noise Policy, which applies to receptors across residences, educational facilities, hospitals, libraries, places of worship, museums, passive parks and other lands where quiet and tranquility are considered essential attributes.

The BC Oil and Gas Commission provides some oversight over resource extraction industries through a noise guideline, patterned closely after Alberta’s Directive 038. Unlike Alberta, however, where regulatory compliance is mandatory, the guideline in B.C. is a discretionary document.

In Quebec, a regulation for processing noise complaints and setting forth requirements for companies that generate them addresses fixed sources like material handling, manufacturing, purification equipment, ventilators and on-site motor vehicles. It does not apply to quarries, sand pits and bituminous concrete plants, which are already prescribed by regulation, nor to agriculture. Four land uses are defined, each with distinct allowable daytime and nighttime noise levels; the most restrictive include land for single-family detached and semi-detached dwellings (including existing homes in agricultural zones), schools, hospitals and other health-service facilities.

Regulations are much more of a patchwork at the local level of government. Cities like Vancouver, Calgary, Edmonton, Ottawa, and Montreal have policies addressing roadway and highway noise in land-use planning and also consider other sources, like railways.

Toronto, seemingly uniquely, has a bylaw constraining the allowable vibrations from construction activities. (Everywhere else, vibration issues are considered on an ad hoc basis.)

Other cities typically have no regulations to address noise or vibrations from new project sites. All of them have noise bylaws that focus on human behaviours, but these are ill-suited as tools for land-use planning.

Other examples of government-imposed noise control include lease agreements in British Columbia for wind farms, such as Bear Mountain Wind Park near Dawson Creek. Administrators of crown lands have embedded covenants limiting the allowable noise levels at residential receptors in proximity to the wind turbines.

Such provisions are typically only known about by the people involved in a project, including those retained to provide services related to assessment of noise. In Ottawa, for example, noise and vibration provisions within a design-build contract for light-rail transit (LRT) were only accessible to the public through a bureaucratic process.

It is apparent the legal, regulatory and contractual framework for control of environmental noise across Canada is a patchwork affair. Different approaches are found between different levels of government. And different private-sector companies, such as railways, may be collocated yet subject to different regulatory oversight.

There are also technical impediments for assessing noise in the context of overall exposures for communities, due to varying metrics used to characterize such exposure. The IAAC mandate is to consider cumulative effects and impacts, but this could prove challenging, given the inconsistent approaches to characterize noise from airports, railways, highways and industrial sites.

Finally, the lack of public disclosure over noise control for projects and nearby lands—where even a freedom of information request to government stakeholders may not uproot relevant information—can pose ethical issues for professional engineers. It is not clear in such cases if government is acting in the public interest or is to some extent ‘in cahoots’ with private businesses.

In 2008, for example, the Quayside Community Board (QCB) in New Westminster, B.C., initiated a complaint over noise from a railyard in proximity to condominium towers with more than 2,000 homes. CTA referred the case to mediation, after which the parties entered a settlement agreement and filed a disposition statement. Two years later, QCB made another complaint to CTA, to the effect the railways using the yard—Burlington Northern Santa Fe (BNSF), Canadian National Company (CN), Canadian Pacific (CP) and Southern Railway of British Columbia (SRY)—had been “unable to or intentionally failed to comply” with the terms of the agreement.

BNSF, CN and CP sought relief from further intervention through the federal court of appeals, with a lawsuit claiming CTA had no jurisdiction to enforce the terms of the settlement agreement. In the end, QCB was precluded from relitigating the issues, but a 2013 CTA decision concluded the three federal railways were, at least in part, not complying with the settlement agreement’s provisions and further action to comply was warranted.

The settlement agreement, meanwhile, has been held in confidence by CTA. In this sense, a party responsible for noise has obstructed public disclosure based on its commercial interests. That said, the agreement is on file with the federal court of appeals and, thus, available to the public through a disclosure process.

Given the proclivity by both public- and private-sector stakeholders to keep noise issues hidden from public view, professional engineers in acoustical consulting may find themselves in a position of ethical conflict when seeking to protect the public health and welfare. Should disclosure of noise impact be mandated when it can be classified as a nuisance? Must it be considered a de facto risk to public health for a compelling case for public disclosure to be made? These questions seem to be unresolved.