Accessibility Along the Trillium Line 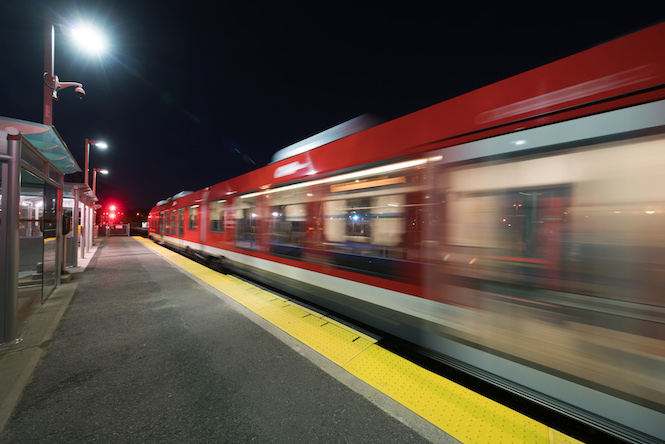 The Cit of Ottawa mandates textured strips along paths of travel and bordering the train corridor. (PCL Construction)

In 2012, the Canadian Survey on Disability found that 3.8 million Canadians over the age of 15 were living with disabilities that limit their daily lives. The study also found that 26% of these individuals experience particular difficulty when using public transit.

Accessibility was a key concern in Ottawa recently, when OC Transpo began the process of implementing a series of new fare gates along the Trillium Line of the city’s growing light rail system. It was of the utmost importance to both OC Transpo and the City of Ottawa that the five fare gates, and the structures designed as shelters around them, be fully accessible. The existing infrastructure met basic accessibility requirements, but the creation of new shelters presented an opportunity to develop truly barrier-free spaces.

Local firm J.L. Richards & Associates Limited (JLR) was contracted to design the fare gate structures and oversee the installation of the fare gates themselves. The multidisciplinary engineering, architecture, and planning group has a track record in accessible design.

“JLR has been on the forefront of barrier-free and special needs design, and we have been helping our clients design a diverse range of inclusive facilities,” explains JLR chief architect, Jeffrey Laberge. “We have walked the talk in this regard in the redevelopment of a number of our regional offices, where barrier-free design exceeded minimum requirements to ensure that our staff and clients can access our spaces unencumbered.”

Sébastien Racine, associate and senior architect with JLR, explains that the firm’s first consideration in regards to accessible design was the Ontario Building Code (OBC). “First, we did what we had to do by code,” Racine explains.

The OBC stipulates that the design of a structure must not prevent any individuals with disabilities from accessing it, navigating within it, or making use of any facilities contained therein. The OBC provides stringent guidelines in support of this objective, which detail the specific requirements for features such as paths of travel, ramp gradients, illumination levels, location of fixtures, and the number, location, and size of doorways.

At stations with existing infrastructure, JLR had to make creative adjustments to ensure that accessibility requirements defined by the OBC were met.

“Some stations were already existing and we had to adapt them,” says Racine. “For example, if there was already a building, we had to modify the location of the fare gates and how we access them to make it accessible.”

In addition to modifying the layout of existing structures, JLR incorporated additional features to enhance accessibility. These additions included fully accessible ticket kiosk machines, new wayfinding signage, gently sloping walkways, improved illumination, and large doorways that exceeded OBC requirements. These features were then replicated in the design of the fare gate structures slated to be built at new sites. 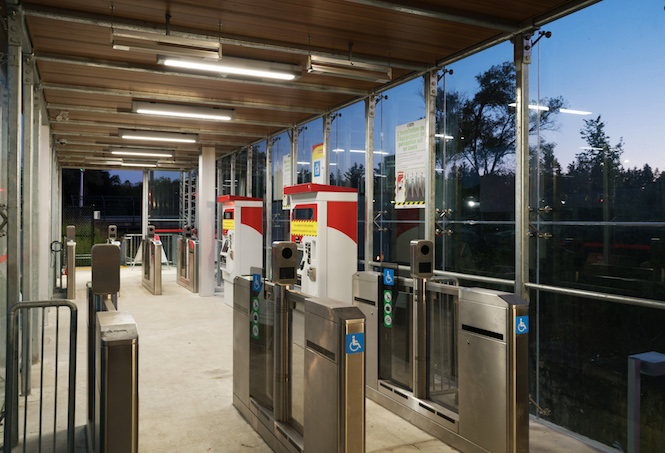 Once OBC requirements had been met or exceeded, the next points of consideration were the specific needs of the City of Ottawa.

In 2012, the city first implemented the City of Ottawa Accessibility Design Standards. These standards expand upon provincial code requirements and detail additional accommodations that must be adhered to in all spaces owned or leased by the city. It provides designers of public spaces with more specific accessibility requirements than the OBC provides.

“The City of Ottawa does have standards that are more stringent than the code,” states Racine, explaining that additional features were implemented to meet the city’s accessibility expectations.

One example of these city-mandated features were textured strips along paths of travel and bordering the train corridor. These strips are designed to assist individuals with visual disabilities in wayfinding and safety. Other features that were integrated into the design were streamlined pathways to better direct foot traffic, and open passageways instead of doors to further eliminate potential barriers.

“Different things can make it hard for people to navigate these spaces,” explains Julie Savignac Duhaime, another JLR associate and architect. “Now, everyone can access the space.”

With OBC requirements and municipal design standards already addressed, the JLR team was left with one final perspective to integrate into the final design of the fare gate structures—that of the local citizens who would be passing through each day.

Savignac Duhaime explains that, in order to get a thorough sense of how users accessed the transit services and infrastructure affected by the project, the JLR team devised an elegantly simple solution. “The whole multidisciplinary team got together and rode the train for the entire route,” she says. “We got on and off at every stop, and we rode the train back and forth.”

JLR also used advanced modelling techniques to determine how foot traffic would realistically flow within the structures, and how crowding might affect accessibility. This strategy allowed JLR to identify potential barriers that may not have been addressed by client requirements or building code.

“As a rule, we realize that codes are minimum,” Savignac Duhaime says. “We try to think of who the users are and what we need to do to accommodate them so that it’s pleasant, enjoyable, and safe.”