A World Beneath Glass

With their focus on life and the world around us, Montral's Nature Museums -- the Biodme, the Insectarium, the Botanical Garden and the Planetarium -- offer an enriching perspective on natural scien... 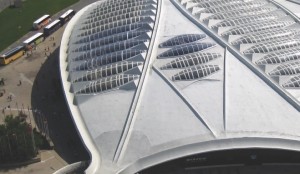 Aerial view of Bidome; it has four “ecosystems” under its expansive glass roof. 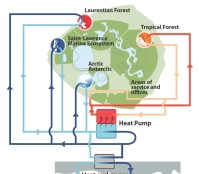 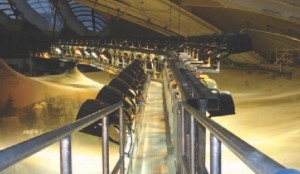 Each ecosystem has its own lighting requirements to simulate natural conditions. 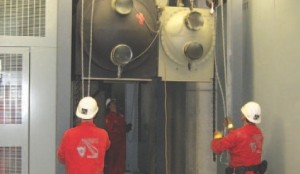 Installing the heat pumps was a logistical challenge.

With their focus on life and the world around us, Montral’s Nature Museums — the Biodme, the Insectarium, the Botanical Garden and the Planetarium — offer an enriching perspective on natural science.

Together, the institutions represent the largest natural science museum in Canada, receiving nearly two million visitors every year. They are located near Montreal’s Olympic Stadium in a large park seven kilometres north-east of downtown Montreal.

The Biodme is the largest of all four institutions at 35,000 square metres. With its glass roof, it brings plenty of natural light to the various ecosystem exhibits inside. The 35,000-m2 building was originally built as the Velodrome for the 1976 Montreal’s Olympic games and had a bicycle race track and ice rink. Today the shell remains untouched but new divisions have been created inside to recreate four different ecosystems of the Americas: the Tropical Forest, the Saint-Lawrence Marine ecosystem, the Laurentian Forest, and the Polar World. Each has its own appropriate climate control. Housing over 4,800 animals of 230 species and nearly 750 plant species, the Biodme is an exceptional concept with unique operating challenges.

In line with the Montreal City Sustainable Development Plan, the Biodme recently underwent a major renovation to make it more energy efficient. Although many energy upgrades had been implemented in the past, it was time to invest in a major overhaul of the HVAC systems.

A public request for proposals led to a partnership with Ecosystem, a Quebec ESCO (Energy Services Company) dedicated to turnkey energy efficiency projects with guaranteed financial savings. Ecosystem worked with Jean Bouvrette, Division Chief of Technical Services of the Nature Museums, and his team to achieve many innovations.

The $8-million project includes energy efficiency upgrades for the Botanical Garden, the Insectarium and the Biodme. The guaranteed annual savings are expected to reach $1 million, equivalent to 27% of the museums’ current energy bills. As of July 2010, most of the measures have been implemented in all three buildings but the energy savings follow-up has not commenced. Improvements to the lighting, drives and motors are already generating $160,000 in savings per year.

The bulk of the new HVAC investments and savings apply to the Biodme. In this building all the network re-engineering is done and the new equipment is installed. Heat recovery started working this summer and the open loop geothermal system has also been operational as of this summer.

Previously the Biodme bought steam and cold water from the Olympic Park’s central plant. Now the Biodme will take full advantage of the heat and cooling recovery within the building. This eliminates the cost of purchasing steam and greatly reduces the consumption of cold water (mostly used as a back-up).

Each of the ecosystem areas require specific environmental conditions. While the Tropical Forest is based on the Costa Rican climate of 25-30C, the St-Lawrence Marine ecosystem and the Boreal Forest ecosystem both have temperatures ranging from 4C to 25C depending on the season. The Arctic and Antarctic ecosystems are maintained at 11C and 2C, respectively, throughout the year.

Our design took advantage of these variations in demand. The important, year-long overall cooling load is being recovered to provide hot water heating to the Tropical Forest and office spaces throughout the winter. Four heat pump units (one 250 tons and three 450 tons) have been installed to assume the complete cooling load previously provided by the Olympic Park.

Since the heating capacity of the heat pumps was dependent on the cooling load in the building, other strategies were used to recover more heat as that cooling load diminishes during wintertime.

When the heating load of the building exceeds the cooling load, heat pumps will recover energy from an open loop geothermal system. Geologic studies led to the finding of a ground water source 20 metres below the building. This water is clean enough and chemically compatible to be used for heat recovery during winter and heat rejection during summer. In this way, the efficiency of the chillers will be much better compared to using them with a cooling tower. An estimated 2,700 m3/day (720,000 US Gallons/day) of ground water table will be pumped during peak demand to make this system one of the largest open loop geothermal systems in Canada. Dual walled plate heat exchangers will prevent any chance of ground water mixing with the heating or cooling fluid of the building. Heat recovery within the building will always have priority over the geothermal system.

Ecosystem’s reengineering aspect of the project was essential to fully take advantage of the heat pumps’ efficiency. A new hot water network, complete with new pumps, had to be installed in order to supply all the mechanical rooms with hot water. Major modifications also had to be made to the cooling network that supplies the office spaces and the ecosystems. Approximately 230 hp of pumps have been removed and the new cooling/heating network has roughly added 370 hp. The major pumps are equipped with variable speed drives to modulate according to the build ing’s heating/cooling loads. In the ventilation systems, six steam coils totalling 70,000 CFM had to be replaced by low temperature hot water coils to take advantage of the 35C (95F) hot water produced by the heat pumps.

Between the fan motors’ electricity consumption and the fresh air heating load, ventilation systems are consuming a fair amount of energy in the Biodme. Free cooling with outside air has been reduced since we now provide mechanical cooling and heat recovery with the heat pumps.

Water quality in the pools and ponds of the exhibit areas is just as crucial as the temperature set points and air quality. The previous filtration systems were equipped with restric tion valves that were modulating to maintain a constant flow to the sand filters. The pumps were then running full speed at all times to compensate for the pressure loss variations of the filters.

These systems have been upgraded with new motors with variable speed drives that are now modulating the pumps’ speed to maintain the flow rate. Considering that the pumps work 24/7 all year long, the upgrade generates great savings.

Major improvements were also made to the lighting systems. Close attention had to be given to the ecosystems as the lighting there must complement the natural light coming from the glass roof. Each ecosystem has its own requirements. For instance, the daylight period of the Tropical Forest must remain fairly constant throughout the year, as opposed to the Laurentian Forest, which fluctuates a lot.

The Polar ecosystem is the only one that does not receive natural sunlight. Here, 3000K T5 dimmable fixtures were installed to simulate natural lighting for the Nordic species.

All the ballas
ts were relocated 69 metres away from the fixtures and outside the ecosystems, which led to a vast improvement in the acoustics in the ecosystems.

A logistical challenge was to find the most cost effective, least obtrusive way to get the new heat pumps to the mechanical room, which has no direct access to outdoors. To bring the units in they had to be hauled on an I-beam structure 3 metres above the floor to clear an electrical current transformer and high voltage lines. No room for errors here. What appears a simple task required many weeks of preparation and coordination with JPM Metal, a contractor specialized in frameworks.

The energy efficiency improvements are expected to reduce the GHG emissions by 30%, which is equivalent to removing 600 cars from the road. The project received a total of $1.7 million from Hydro-Qubec, the FCM Green Municipal Funds and Natural Resources Canada’s EcoEnergy program.

For the Montral’s Nature Museums administration, this project is one of many steps they are taking towards their ultimate target of having zero waste and zero greenhouse gas emissions from their buildings within 15 years. The future Planetarium, expected for 2012, targets a LEED Platinum certification.

In Charles-Mathieu Brunelle’s words (executive director of Montral’s Nature Museums): “Progress toward energy efficiency is a must; considering the state of our planet in this day and age, we need to take action, collectively and swiftly.”

Olivier Matte, ing. and Andr-Benit Allard, ing. are both with Ecosystem in Montreal. Matte is in charge of training and awareness and Allard is the project manager for the Biodome upgrades.