A Tale of Two Banks

When the headquarters of the Hong Kong Bank opened in 1986 the press hailed it as the "building of the century." Its architect, Norman Foster, became Sir Norman.Yet the building did not show much conc... 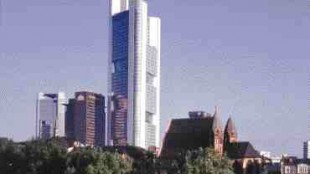 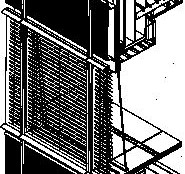 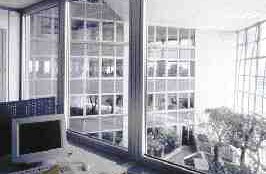 Left: internal offices benefit from the natural environment in the atrium. 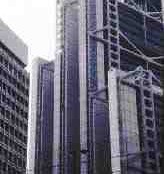 The complex forms of the Hong Kong Bank’s headquarters built in the 1980s consumed vast amounts of imported material. 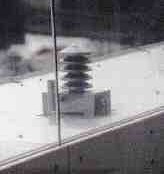 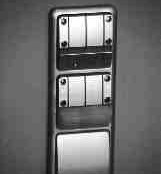 When the headquarters of the Hong Kong Bank opened in 1986 the press hailed it as the “building of the century.” Its architect, Norman Foster, became Sir Norman.

Yet the building did not show much concern for energy conservation or ecology. The aluminum cladding–5 mm thick–was so intricate that only one company in the world, Cupples of St. Louis, Missouri, was found capable of doing the job. It had previously made the cladding for the twin towers of the World Trade Centre in New York (110 stories each). The 47-storey bank in Hong Kong required 1.5 times more cladding than the World Trade Centre, partly because the entire exposed structure inside and outside was encased in aluminum, and partly because of the extremely large exterior surface. The surface-to-volume-enclosed ratio of the bank seems pretty close to that of a car radiator (see photo). The special suspension structure, proudly displayed on the outside of the building, is so inefficient it requires approximately twice as much steel per unit of floor area than Chicago’s John Hancock tower.

The Hong Kong building was almost entirely prefabricated by manufacturers from all over the world and brought by ship or by air to the site–to a city that has more experience in erecting tall buildings than any other. The amount of fuel used up in the transportation of the building components and of the various consultants and suppliers would probably keep a decently sized building going for a century.

The bank paid more than U.S. $1.1 billion for the building, but the board of directors drew the line when it came to interior gardens. The architect planned to have “sky gardens” in the double-height spaces separating groups of floors. The bank said no.

Last year, Foster finally realized his garden ideas in another bank headquarters–the Commerzbank in Frankfurt, Germany. In this case the client required the building to be designed for ecological awareness, energy efficiency, economy and buildability. It was completed last year, but unlike its predecessor caused hardly a stir in the architectural press in spite of its success in all those areas.

With a height of 60 storeys, measuring 300 metres including the antenna, the Commerzbank is not only Europe’s tallest building, it is also perhaps the world’s first major commercial building of this size to be designed with a serious environmental agenda. In plan it is an equilateral triangle with rounded corners and convex sides. Two sides of each floor are typically used as office space, while the other third is part of a garden. Nine four-storey-high recessed gardens rise in a spiral every twelve floors around the building and around a triangular central atrium.These gardens are not only a place for the occupants to enjoy direct access to the outdoors in the upper floors, but they also play an important role in naturally ventilating the building.

The bank’s structure, designed by Ove Arup Partnership with Krebs and Kiefer, consists of eight storey-high Vierendeel frameworks supported by six composite columns (approximately 7.5 x 1.5 metres) at the three points of the building. The Vierendeels span over 36 metres across gardens and the entrance lobby. Secondary beams span from the Vierendeels to primary members that bear on the three triangular columns placed at the corners of the atrium. The electrical consulting engineer on the project was Schad & Holzel, and the mechanical design was by J. Roger Preston with Petterson & Ahrens. Ingenieur Buro Schalm (IBS) was consultant on the design of the facade and building physics.

For energy efficient cooling the bank relies largely on the natural ventilation from the gardens into the atrium, on daylighting and exterior sun-shading. Frankfurt enjoys a much more temperate climate than most of Canada, of course, so the technology used in the Commerzbank may not be applicable here. Our challenge is to see if any of its strategies might be adapted to make our buildings better.*

The wall consists of two layers. There is a double-glazed inner wall in which the windows are located. In front of it is a 165-mm wide air space and a ventilated glass screen 8 mm thick. The screen is open at the top and bottom at each floor level, allowing external air to enter the cavity but keeping rain out.

The outside air entering the cavity is drawn up by convection, creating air currents that pull hot and stale air from the offices when the windows are open. Cooler fresh air is drawn in.

The air circulation in the cavity increases as the solar radiation grows due to the increased air currents. Aluminum blinds located within the cavity can move up and down and rotate by motor. In summer the blinds can be inclined to create external shading; in winter they can be adjusted to reflect sunlight upwards to the ceiling. The windows are also motorized and tilt inwards, allowing users to adjust them individually for ventilation.

The sky gardens also have openable windows at the top. These enable air from outside to circulate in the atrium and thus also provide natural ventilation for internal offices facing the atrium. The stack effect in the atrium assists the process of ventilation, but in order to reduce the air velocity the atrium is subdivided vertically by intermediate transparent ceilings at 12 storey intervals.

A water-filled cooling system is integrated into the ceiling panels, and space heating is at the perimeter, linked up to the municipal cogeneration plant.

Employees are able to control the temperature in their offices individually within a limited range from a single multiple-switch unit, but most of the mechanical and electrical components are under the control of a computerized building maintenance system which takes over from the humans when circumstances warrant. It controls both the windows and the blinds. While the building is not occupied at night or during holidays the system opens the windows and lets natural ventilation cool the building down. It closes them if external sensors detect a storm coming. All this is co-ordinated with the cooling system and perimeter heating.

How well will it perform?

It will be interesting to know how much use the sky gardens in the building get once the novelty has worn off. There is not much space in them for people, and in most there are only vending machines. During my visit on a beautiful August morning there were just two people in one of the four gardens I went into, while the big, bright public restaurant on the ground floor (also with openable windows) was busy with banker types on their coffee break.

An informal poll of the employees showed a high level of satisfaction with the comfort and atmosphere in the building. With regard to its energy efficiency, no data is available yet, but it is being extensively monitored. The computer-simulated yearly energy consumption figures for the building give 18 Kwh/m2 for ventilation motors, cooling at 115 kW/m2 and heating at 36 Kwh/m2. These figures are based on the building having 60% natural ventilation during the total hours of use.

As for the curtain wall, at least another office building is in operation in Germany using a similar double layer wall and windows technology. The RWE company headquarters in Essen has no gardens and no atrium, but in some ways its system seems to be even more sophisticated than the Commerzbank’s.

Specially developed “spoilers” in the outer openings of the curtain wall enable the wall to function more or less irrespective of the external wind conditions and lead to optimum air exchange rates and pressures in the cavity.

The underside of the openings is formed by a solid plate whereas the top is a perforated plate, alternately connected to the stories above and below. Each pair of adjacent bays forms one unit with one field having the vent at the top and the other at the bottom. This arrangement corresponds with the principle of diagonal through-ventilation developed for this project–a method which guarantees that
no short-circuit currents of stale air can form between the individual floors.

The designers of the RWE building with their simpler scheme and smaller building surface may be able to achieve even better energy efficiencies than the Commerzbank. But if Sir Norman Foster has received comparatively little publicity for his effort in Frankfurt, who, outside Germany, has ever heard of Ingenhoven Overdiek Kahlen & Partners or their engineers?

Paul Sandori is a consultant with Revay & Associates Limited in Toronto.

* The 46-storey Wall Centre hotel complex under construction in Vancouver is using several approaches to make it Vancouver’s first “green” highrise. Like the Commerzbank it is to have garden floors. The same architects, Busby & Associates, and mechanical engineers Keen Engineering have also designed a building with a double wall and operable windows for BC Tel.

The Commerzbank headquarters in Frankfurt, Germany is among the first of a new generation of skyscrapers designed according to a serious green agenda.