Winners in the 2016 Canadian Institute of Steel Construction National Awards demonstrate the imagination and creativity of structural engineers.

The Canadian Institute of Steel Construction (CISC-ICCA) announced the winners of its 2016 National Steel Design Awards on October 5 in Toronto, celebrating excellence in steel design and construction. The national awards are given every two years and are drawn from the regional winners, although selected in a separate judging process. For more details, see https://news.cisc-icca.ca

ENGINEERING AWARD:
Queen-Richmond Centre, Toronto
The downtown complex consists of two historic buildings organized around an atrium, with an 11-storey office tower supported above them on a “tabletop.” The tabletop platform is seven storeys in the air and was a significant design challenge given the enormous loads involved.
The solution was a “mega delta-frame” support system inspired by children’s jacks. Each mega delta frame consists of two stacked, rectangular-based, space-frame pyramids, with the top pyramid inverted. The apex of both pyramids meet at the centre in a node 40 ft. high. The system aligns each of the corners of the frames directly beneath the office tower columns above, providing a direct load path for the gravity loading. This massive support system is exposed as a feature of the glass atrium.
Each frame consists of 1-metre diameter steel legs, with a 2-inch steel thickness, pressure filled concrete and a
17-ton cast steel node. Each mega delta frame can support forces of 80,000 kN, the equivalent of the weight of 400 transport trucks. (The project won the 2015 Canadian Consulting Engineering Schreyer Award, see CCE, Oct-Nov, 2015, p. 22.)
Project team:
Stephenson Engineering (structural engineer), Allied Properties REIT (owner), Sweeny & Co. (architects), Eastern Construction, Walters Group,
CastConnex. 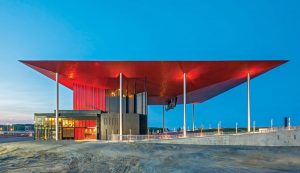 ARCHITECTURAL AWARD:
Cogeco Amphitheatre,
Trois-Rivières, Quebec
Located on the St. Lawrence River, this indoor-outdoor theatre has 3,300 indoor seats and accommodates 5,500 on a grassy section behind the bleachers.
The architecture is characterized by a huge 80 x 90-metre exposed metal roof resting on eight thin columns 5.9 m high. The structure seems to “float” on the landscape. The coveted lightness of the steel , as well as the rapidity of its execution, were important factors in the choice of material.
Each high column consists of six bent steel plates to form a cylinder 850 mm in diameter. The columns are a composite of the steel with high-strength concrete of 45 MPa that gives them an increased stiffness without risk of buckling. The columns take over the gravity loads of the roof as much in compression as in tension.
The metalwork of the roof is fabricated in a crisscrossing of trusses, thus giving the structure a bidirectional response to its behaviour under the action of gravity, wind and seismic loads.
Project team:
Stantec/DPHV (structural engineer), Paul Laurendeau/Francois Beauchesne (architects), City of Trois-Rivières (owner), Canam-Buildings, Genifab, Montacier.

BRIDGE AWARD: Vimy Memorial Bridge
(formerly the Strandherd-Armstrong Bridge), Ottawa
The bridge across the Rideau River has a 133-ft. wide deck cross section, comprising four general purpose and two turning lanes, two transit lanes, two cycling lanes, and sidewalks.
The design separated the roadways from each other and from the sidewalks on each side, creating three open-air slots within the bridge.The slots accommodate the triple steel tubular arches along the 410-ft. main span. The arches support the supspended deck using inclined hangars. The design is the first of its kind in North America.
The river is a designated UNESCO world heritage site, which meant strictly controlling the construction’s environmental impacts. An innovative method allowed 90% of the steel superstructure to be erected on temporary supports on the east approach and then launched into place across the river. For the installation the ends of the arches were tied in a “bow string” horizontal post-tensioned cable system and supported on dollies.
Project team:  Parsons (design engineer), Harbourside Engineering Consultants (erection/construction, quality assurance engineer), City of Ottawa (owner), Horseshoe Hill Construction, Montacier, Cherubini Metal Works, Tenca Steel Detailing, Freyssinet.

SUSTAINABILITY AWARD: Jeanne and Peter Lougheed Performing Arts Centre, Camrose, Alberta
The 44,200-sq.ft. theatre was built with a focus on sustainability, including having a large solar PV array on the flytower.
The main performance chamber, which seats 550 people, had to be designed for acoustic separation. It is enclosed on three sides with a cast-in-place load bearing concrete wall, while the ceiling consists of a concrete topping over steel deck, supported by short span open web steel joists (OWSJ). These in turn are supported on custom 24-m span steel trusses. The trusses also support the catwalks and lighting equipment below.
The 22-metre fly tower was a design challenge. In order to minimize the size of the structural members to fit within the theatre designer’s wall system, “two-way” framing  was incorporated in the tower’s west wall. This structure uses both vertical columns and horizontal beams as a means for sharing the lateral wind loading and thereby reducing the overall member sizing and quantities.cce
Project team:
Read Jones Christoffersen (structural engineers), BR2 (architects), Clark Builders, Whitemud  IW, Canam