“A spiritually and culturally significant project, with engineers leading the way.” – Jury 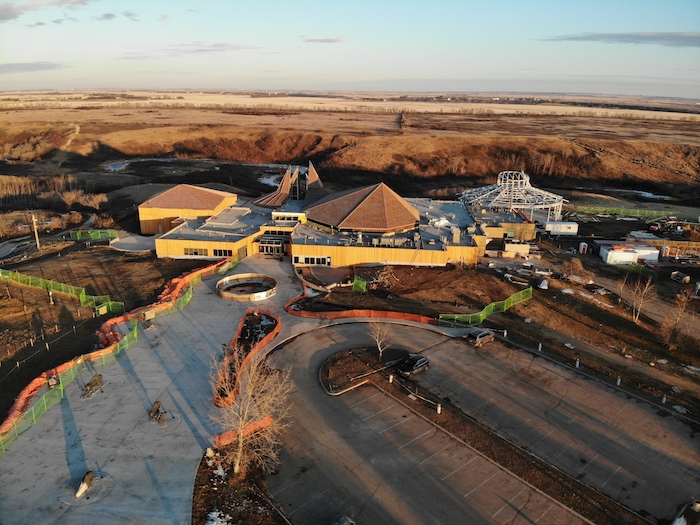 Wanuskewin Heritage Park near Saskatoon is a world-renowned research centre that honours Indigenous peoples and educates visitors about local tribes. Associated Engineering (AE) provided design and project management for facilities to care for bison, facilitating their return to Wanuskewin. The project involved a unique collaboration and a cultural awareness journey that resulted in a shared vision for the facility. In 2019, 150 years after they were driven to near-extinction, bison returned to graze again on the Northern Plains.

An opportunity in refurbishment

For thousands of years, the Indigenous peoples of the Northern Plains followed the bison, which provided food, clothing, shelter and tools. Following the arrival of settlers and the construction of homesteads and ranches in the late 1800s, hunting and loss of habitat drove the bison to near-extinction, reducing their population from 30 million to less than 1,000. The demise of the bison, sacred to the identity of the Plains Cree, was simultaneous with the destruction of the way of life for Indigenous people on the Prairies.

Wanuskewin Heritage Park was established in 1992. By 2015, it needed to be refurbished and upgraded. As part of this renewal, the Wanuskewin Heritage Park Authority saw an opportunity to return a resident herd of genetically pure bison to the Northern Plains. The authority retained AE to design, tender, oversee construction of and manage a $3.5-million program, to build facilities to protect and care for the bison.

AE’s team learned from leaders and elders and participated in cultural events to better understand the relationship between the land, the bison and the First Nations. The team consulted with equipment vendors, facility contractors and experienced bison herd managers from Parks Canada, who had previously helped establish herds at Banff, Elk Island and Grasslands National Parks.

The project was tendered via traditional design-bid-build (DBB) and design-build delivery methods to meet stringent deadlines—construction had to be completed ahead of the bison’s arrival. Through a collaborative approach with the park authority, First Nations, elders, stakeholders and experts, AE delivered Wanuskewin’s bison facilities on time and under budget.

A symbol of hope and reconciliation

The Wanuskewin Heritage Park Authority owns and operates an internationally renowned interpretive centre for research and improving the public’s understanding of the Indigenous tribes of the Northern Plains. It wished to further increase the visibility of the park through advancement of educational programs, preservation of its biodiversity and unique ecology and the return of the bison.

To achieve its vision, the authority announced a $40-million ‘Thundering Ahead’ campaign to renew and upgrade its facilities. AE managed the design and construction of infrastructure to facilitate the return of, care for and safe public engagement with the bison. A collaborative approach fostered a free flow of ideas.

In December 2019, six young bison from the Grasslands National Park herd in southwestern Saskatchewan returned to Wanuskewin. A month later, four pregnant cows and a mature bull from the U.S. reconnected with the herd. All were descendants of the historic Northern Plains bison.

Four months later, the first bison calf in 150 years was born on the plains of Wanuskewin. Today, with a herd of 17 bison, the facility has begun to fulfil the vision of returning the majestic animals to the Northern Plains as a symbol of hope and reconciliation.

With the project, bison have returned to graze on the Northern Plains, 150 years after they were driven to near-extinction. Photo courtesy Associated Engineering.

The project restored what was cattle pasture and crop land to natural grassland, allowing the Northern Plains to be grazed by bison once again. Like the animals, the plains’ grassland ecology is one of the most threatened on the planet.

In 2020, bison activity—including wallowing, where the animals roll in the grass and create dust pits—uncovered a major archaeological discovery: submerged boulders with carved drawings (petroglyphs) and the stone knife used to create them, near an ancient bison jump. Later, archaeologists found three additional petroglyphs dating back 300 to 1,800 years.

The return of the bison to the Northern Plains led to the discovery of these historic, hidden petroglyphs, which shed additional light on the connection between the Indigenous tribes and the animals.

AE drew upon its previous experience with livestock facilities to design a facility to nurture bison throughout their entire life cycle. Understanding cattle and bison are different animals and the facility would require a unique design and specifications, the team used advanced software and analyzed a set of factors based on the physical attributes of North America’s largest native mammal.

The design of the paddocks, alleys and pens focused on moving the animals with as little stress as possible, with equal importance placed on the safety of the handlers and general public. The alley leading to the main building is long and wide, with watering stations and feed to encourage the animals to become comfortable in the space throughout the year.

Heavy board fencing was constructed in the main facility’s loading area so handlers in an alley or chute could quickly climb out to safety. The gap in the fencing was designed to be wide enough to fit handlers’ heavy winter boots.

To ensure public safety, AE incorporated a high ‘people fence’ adjacent to the viewing area and public facilities, in addition to the double fencing around the paddocks. In these senses, Wanuskewin’s project is a model for future facilities to support the return of bison elsewhere.