“This record-setting project was notable for minimizing ecological damage and saving time and money.” – Jury 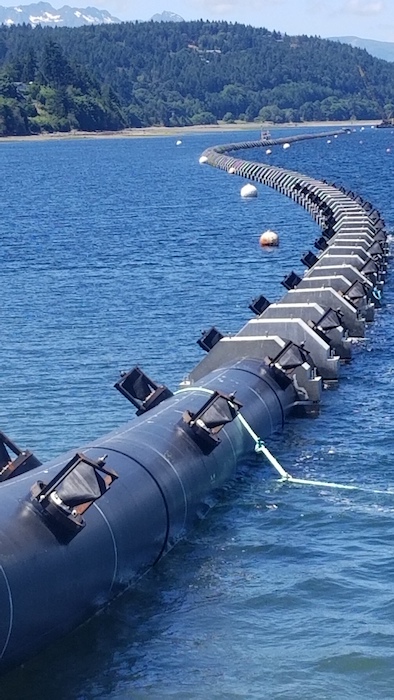 Before completion of the new McLoughlin Point wastewater treatment plant (WWTP) in Victoria, British Columbia’s Capital Regional District (CRD) was discharging raw sewage into the ocean from two outfalls. After decades of public controversy over unsustainable waste management, construction of a new outfall for the WWTP would instead facilitate discharge of treated effluent.

Preliminary concepts included reusing existing outfalls, which would have required twinning conveyance pipelines to pump stations, an additional 1.2 to 4.2 km of underground infrastructure and lift station pumps to overcome limiting hydraulics. By installing a new outfall at the plant site instead, the additional infrastructure would not be needed, reducing initial conveyance system and ongoing operating costs.

The inshore segment’s section of steel pipe was microtunnelled through bedrock. A ‘wet exit’ technique avoided the use of expensive cofferdams and limited disruption to the sensitive intertidal marine environment.

A tunnel boring machine (TBM) was driven offshore into the exit trench and into the ocean. A specially designed bulkhead door was then sealed shut. A blind flange was installed in the launch shaft and the pipe was flooded. The TBM then disconnected from the pipe string and floated to the surface.

The offshore segment consisted of solid-wall HDPE pipe, designed for a ‘float and sink’ installation.

To resist the effects of ocean currents, wave-induced energy and buoyancy, a total of 350 reinforced concrete weights, each approximately 11,000 kg, were installed along the pipe at 4 to 6 m apart. Permanent fasteners were constructed of corrosion-resistant materials, such as super-duplex stainless steel, silicon bronze and titanium.

Design work included determining ocean-induced forces, using 100 years of wind data, as well as current velocities at a nearby monitoring mooring. Stability analysis determined the mass required to keep the pipe stable on the ocean floor.

Installation force analysis was also completed, as the highest stress the pipe would undergo was bending during installation. The analysis determined a safe bend radius during the float and sink operation and determined a pipe ‘end pull’ of up to 100 metric tonnes was required to maintain this safe radius.

A multi-port diffuser was designed to achieve an initial dilution of the effluent of 100:1 for low current speeds during unstratified winter conditions and to convey anticipated peak flow of 5.1 m3/s by gravity, with allocations for storm surge and sea level rise. Temporary diffuser closures were designed to be pressure-tight, allowing for pressurization of the pipeline during sinking, so the diffuser could be installed as part of the main outfall.

An internal sealing system for the 36 diffuser ports was designed to withstand pressures up to approximately 3 bar. Once on the bottom, these seals were removed by a remotely operated underwater vehicle (ROV).

Given stringent environmental regulations, near-field and far-field modelling of the treated effluent plume was completed to ensure adequate dispersion. To meet such dilution criteria throughout the entire 75-year flow development of the treatment system, wide ‘duckbill valves’ were selected for the 36-port diffuser.

While on-bottom disturbance was minimal, compensatory restoration of an equivalent footprint of the outfall was required in accordance with a Fisheries & Oceans Canada regulation. This was achieved by salvaging blast rock from the outfall exit trench to create habitat reefs adjacent to the construction site.

Fisheries & Oceans Canada was concerned the outfall could permanently embed in the soft sea bottom, creating a barrier for the movement of the Dungeness crab. For safe passage, fibre-reinforced plastic bridges were added along the pipe. 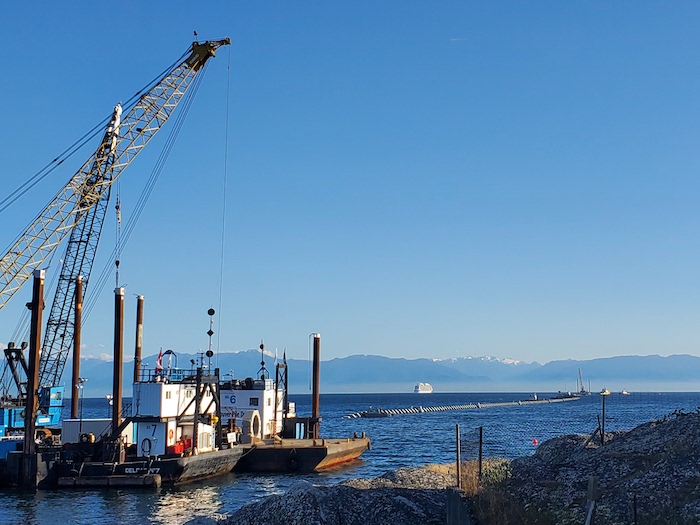 A ‘float and sink’ installation was used for the offshore section.