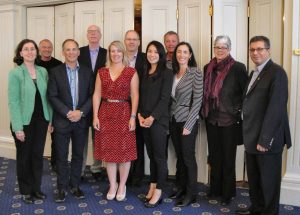 The competition was tough!
On the following pages we are proud to present the winning projects in this year’s Canadian Consulting Engineering Awards / Prix Canadiens du genie-conseil.
The winners were announced and celebrated in Ottawa at a gala dinner on October 25. Congratulations to all!
Now in their 48th year, the awards are held jointly by Canadian Consulting Engineer magazine and the Association of Consulting Engineering Companies-Canada (ACEC/AFIC). They are the longest running and most important national mark of recognition for consulting engineers. The winners are projects that demonstrate a high quality of engineering, imagination and innovation.
This year’s number of entries far exceeded previous years. We received 77 entries from across Canada. By comparison in the last four or five years we have received around 60 to 65 projects — so the competition was tough!
The jurors selected 20 projects to receive Awards of Excellence and five Special Awards.
The Schreyer Award is the “grandfather” of the special awards and is the top technical award. This year it goes to a highly innovative wood structural design at the Grandview Heights Aquatic Centre in Surrey, B.C. by Fast + Epp. The Tree For Life/Un Arbre à Aimer environmental award is given to BBA for their work on a plant in Edmonton that is the world’s first commercial biorefinery that converts non-recyclable household garbage into clean energy. An award for a project that has special societal and cultural value, the Engineering a Better Canada award, went to Stantec for the beautiful wooden Mistissini bridge. It was built for a remote James Bay Cree community in Northern Quebec. The Ambassador Award is for an international project. It goes to AECOM’s Montreal office for studies that helped Haiti protect its infrastructure from the ravages of storms and climate change. Lastly, the Outreach award goes to North Vancouver’s COWI team who volunteered to build the Rio Abajo footbridge for a small community
in Nicaragua. – CCE

CHAIR’S COMMENTS
How to choose?
It was a great pleasure to be on the panel of jurors for this year’s Canadian Consulting Engineering Awards.
Every year I am amazed at the ingenuity, creativity and caring of engineers throughout Canada. Believe me, the jury did not have an easy time singling out the few projects you
see here.
Besides selecting 20 projects for awards of excellence, we were also charged with selecting five of those winning projects for special awards. How to choose between projects like a pedestrian bridge in Nicaragua, the huge Union Station project in Toronto, flood mitigation in Haiti, an Alberta plant that turns garbage into biofuel, and changes to an ice arena in Nunavut that have dramatically lengthened the available use of the facility and produce zero greenhouse gases in operation? Some projects are technically challenging. Others are creatively addressing a changing earth. And some have significantly improved the lives of people in the communities in which they were undertaken.
But choices do have to be made. So the projects we have honoured are those that, with the information we had available, were deemed to be the best of the best. They are projects that deserve recognition from consulting engineers, Canadian engineers in general, and the Canadian public who may hear about these projects for the first time through these awards.
Thank you to all the companies involved for letting us learn more about your great work,
and congratulations to all the winners.
— Peter Judd, P.Eng., Jury Chair

Portfolios of all this year’s and previous
years’ entries are showcased here.
https://www.canadianconsultingengineer.com/
awards/showcase-entries/
Also, for more details about the awards’ history and purpose, click here.

CHAIR
Peter Judd, P.Eng., was general manager of engineering for the City of Vancouver until his retirement last year. In that role he oversaw 1,800 employees and a department that provided everything from public works planning and design, to construction and maintenance. He led many of the city’s green initiatives, and also spearheaded Vancouver’s Olympic and Paralympic Operations during the 2010 Winter Games.
JURORS
Mohamed Al-Hussein, Ph.D., P.Eng., is a professor in construction engineering and management at the University of Alberta. He holds the NSERC Industrial Research Chair in the industrialization of building construction. He is a past chair of the Canadian Society for Civil Engineering national construction division (2004-2008) and has held advisory posts such as on the City of Edmonton Infrastructure Technical Advisory Committee.
Annette Bergeron, P.Eng., MBA, FEC, was president of Professional Engineers Ontario in 2013, and president and chair of the Ontario Society of Professional Engineers in 2005 and 2010. She currently serves on the boards of Engineers Canada, and the Electrical Safety Authority (of Ontario), after teaching and administrating at Queen’s University in the Faculty of Applied Science, and School of Business. She has twice been named one of the Top 25 Women of Influence in Canada.
Jim Burpee, P.Eng., retired in 2014 as president and chief executive officer of the Canadian Electricity Association. Involved in the North American electricity industry for 38 years, he held senior executive roles in Ontario Power Generation and its predecessor Ontario Hydro. During that time he oversaw 17,000 MW of fossil and hydroelectric generation, two different nuclear sites, energy trading and corporate development.
Gerry Chaput, P.Eng., is Assistant Deputy Minister of the Provincial Highways Management Division, Ontario Ministry of Transportation. His division oversees the planning, engineering, construction and maintenance of 16,500 kilometres of
highways and 2,700 bridges, delivering the province’s largest capital construction program. He served as president of the Transportation Association of Canada from 2014-2016.
William (Bill) Edwards, P.Eng., is chair of SJ Energy in New Brunswick. In March he retired as Commissioner of Transportation and Environmental Services and as Commissioner of Saint John Water for the City of Saint John. He had a 30-year career with the city, including acting as Chief Building Inspector and Chief City Engineer. In 2012 he received the Queen’s Diamond Jubilee Medal for his work with the Canadian Federation of Municipalities.
Vanessa Fong, B.Sc., M.Arch, OAA, is an Ontario architect and principal at VFA, a studio specializing in holistic, contextual design. She has served on the council of the Ontario Association of Architects for three years and is currently its vice-president of communications. She also sits on the board of the Design Industry Advisory Committee, a cross-disciplinary research group that promotes the contribution of designers from all disciplines to economic, social and environmental goals.
Louise Millette, Eng., Ph.D., is director of the Department of Civil, Geological and Mining Engineering at Polytechnique Montréal, and the first woman to hold the position. She is also head of the Sustainable Development Office at the university. Outside academia her roles have included helping to draft the “First Strategic Plan for Sustainable Development of the Montreal Community.” She has served on several boards and was recently appointed to the board of the Canadian International Resources and Development Institute.
Chantal Morissette, M.Sc.A has been head of the City of Montreal’s Water Service (Service de l’eau) since 2011. She manages
$30 billion worth of assets related to producing drinking water for 2 million people, as well as wastewater treatment and storm water management. The service has 900 employees and operates six drinking water treatment plants and a wastewater treatment plant said to be third largest in the world. She has served on the board of the American Water Works Association and is currently on the board of CERIU (Centre of expertise and research in urban infrastructure).
Catherine N. Mulligan, Ph.D., Eng., is a professor in graduate studies and research at Concordia University in Montreal. She is also Concordia Research chair in Geoenvironmental Sustainability. After graduating from McGill University in chemical engineering, she worked as a research engineer for 14 years, then obtained her doctorate in geo-environmental engineering. In 2010 she was given the A.G. Stermac Award for outstanding service to the Canadian Geotechnical Society.
Stephen Panciuk, P.Eng., is senior vice president and national engineering professional lead at Marsh Canada. Based in Ottawa, he specializes in developing and implementing a national strategy for large design firms, and project errors and omissions liability insurance. After earning a civil engineering degree he had five years’ experience in the heavy civil construction industry before entering the insurance business. He is a frequent speaker at conferences and a member of the Association of Consulting Engineering Companies-Canada contracts committee.