1999 CCE Awards: a success for members and clients alike!

The Truth is out there! On October 20th, in a gothic "X-Files" setting, close to 400 people shared in the presentation of the 1999 Canadian Consulting Engineering Awards. The event drew award recipien... 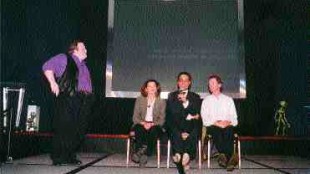 An unsuspecting “victim,” seated between Second City actors, improvises his way through a spontaneous sketch. 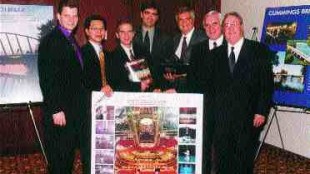 The Truth is out there! On October 20th, in a gothic “X-Files” setting, close to 400 people shared in the presentation of the 1999 Canadian Consulting Engineering Awards. The event drew award recipients and their guests, clients, suppliers, members from across Canada as well as several engineering students.

The students in particular were impressed with the scope of work being recognized over and above the winning projects. This year, all 40 entries were featured in a series of 30-second vignettes, which heightened the aura of mystery surrounding the actual award winners.

Master of Ceremonies Erin Davis, morning show co-host on CHFI 98 FM, gave the evening a touch of light-hearted class and style, regaling the crowd with clever improvisations on the many “technical” terms released throughout the evening; for those in attendance, “bioslurping” has now gained several more meanings!

The Second City Troupe did a wonderful job of engaging the crowd and grilling a couple of unsuspecting “victims” in a series of hilarious audience-participation skits, which ended the evening on just the right note.

Once more, congratulations go to all those who submitted their entries to this year’s program and especially to those who took away the honours of the 1999 Canadian Consulting Engineering Awards.