Next Generation Buildings: Power Over Ethernet

In the emerging era of the Internet-of-Things and IP networks, the use of Power-over-Ethernet is a technology that can simplify a building’s electrical and communications infrastructure. 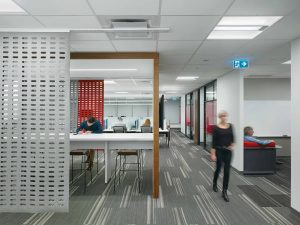 Buzzwords abound in business circles. Admit it, “leverage,” “synergy,” and “low hanging fruit” all just came to mind. In technology circles, the “Internet of Things” or — IoT — falls into that category. It refers to billions of devices connected to the Internet, providing value and better experiences.
But what does all this mean in buildings, where we spend 90% of our waking lives? It means our buildings are becoming smarter.

Power over Ethernet – simplified communications infrastructure
A feature of the new generation of buildings is their use of one Internet Protocol (IP) based network. An IP-based network connects most building systems (fire and life safety being an exception), but it can also deliver electrical power to the devices as well. In a new building this “Power-over-Ethernet,” or “PoE,” simplifies the communications infrastructure, eliminating conduit and cable, and enabling the cost-effective deployment of next generation “Internet of Things” sensing and devices.
PoE simplifies the building’s infrastructure because so many of the devices in buildings now consume DC power and require a network for data connectivity and control. Converting energy from AC to DC causes losses of ~13% of the energy delivered to that device, so it makes sense to centralize this conversion process for better efficiency. It has been done by IT networks for decades (think of your VoIP phone) with power transmitted by structured cable.
Structured cable is rated in different categories by the ANSI/TIA/EIA-568-B.1 and ISO/IEC 11801 standards, with examples of Category 5E or 6A being common for data networks today. This power delivery is not bleeding edge, but uses Ethernet and Power-over-Ethernet based off the IEEE 802.3 standard. The global power standard is 802.3, delivering up to 30 watts, and in the near future up to 100 watts with Ethernet. There are market solutions currently delivering 60 watts over PoE, with the IEEE 802.3bt standard expected this calendar year.
Using this DC infrastructure to also power connected devices offers value through quicker installation costs and lower labour rates. Savings can range from $0.30-$0.60 USD per square foot, and the building need not run any differently than a traditionally designed, integrated and constructed building.
Clearly the approach requires that the designers rethink the networks in the building early in the design process. It means:
• moving some traditional electrical distribution to structured cabling and communications designs;
• a shift of distribution infrastructure from the electrical room to the LAN (local area network) room — also referred to as the intermediate distribution frame (IDF) room;
• using expanded cable trays in drop ceilings, with reductions in conduit, junction boxes and line voltage terminations;
• considering PoE cable length limitations of 100 m from the switch to the connected device;
• ensuring that the network has the capability to handle all of the traffic that will flow over it; many are currently using 10Gb as a standard today;
• including security appliances (firewalls), servers and storage in a physically secure location;
• considering that this network infrastructure needs to be deployed earlier than with traditional designs during construction scheduling.

Lighting and PoE — Cisco Canada’s
Canadian Headquarters
A good example of the move to more directly network connected systems is lighting. PoE-powered lighting can provide up to 75% energy savings when compared to fluorescent lamps. This is the result of the combination of LED luminaires, which can reduce consumption by 50% (compared to fluorescent), and embedded controls, which can provide up to 25% additional savings through daylight harvesting, occupancy detection, and individual control strategies. PoE lighting is also faster and simpler to install than comparable line voltage systems.
At Cisco Canada’s Canadian headquarters in Toronto’s RBC WaterPark Place, 1,400 PoE LED luminaires are deployed throughout the 100,000-sq.ft. space. The system consists of uplight, linear recessed, potlight and 2×2 troffer configurations, with touch panels for control in enclosed spaces. Powering these lights are 8 port switches mounted in stacks distributed in the drop ceiling. Each switch is plenum rated, fan-less and designed for this application, not requiring additional cooling. Category 6A cabling provides power and communication to the lights and sensors. Modelled and designed by Hidi Rae Consulting Engineers, the system has a lighting power density of 0.47W/sf, exceeding ASHRAE 90.1-2004 by 52.6%.
The network architecture is relatively simple by IT standards, being typically designed with “dual-star” topology, meaning consists of dual core switches (for redundancy) and access layer switches on each floor (or alternating, depending on how many devices need access).
The network for the LED lights in Cisco’s space is owned and managed as part of the base building systems by Oxford Properties, which also connects and powers 2,200 PoE VAV boxes, PoE CCTV cameras, energy meters, common area WiFi by Cisco and other base building systems at controller levels.

Converged control networks
In a retrofit capital costs can be decreased by using a single network as opposed to relying on individual vendors to provide proprietary control networks. Cameras, building automation systems, digital signage, lighting, access control, common-area WiFi and more all need a network for controllers, and devices, to communicate with management systems and operator interfaces. Depending on the number of connected systems, this unifying communication infrastructure can pay for itself within two or three system upgrades.
The trigger to installing the infrastructure will vary by building, depending on the business drivers. Examples of these include:
• energy cost/consumption challenges
• tenant vacancies
• systems upgrades
• competitive pressure and a need to reposition an aging asset
• obsolescence or security challenges of a legacy network.
Competitive pressures are likely the largest driver in hot markets. Toronto, for example, had almost 4 million square feet of new office space under construction at the end of the second quarter of 2016. In these situations existing assets are struggling to compete with old infrastructure.
How does this change the design process?
Integrated design teams where architects, engineers, operations staff and constructors collaborate through the design and construction process have been on many developers’ and owners’ radar for a while, particularly in green buildings such as LEED-targeted projects. But a smart building as described here is only achievable if those specifying and managing the controls are engaged in the same process — meaning there must be representation from IT experts on the design team. Otherwise, it is typical for decisions to be made, contracts to be awarded, and for it to be “too late” to change course for a building team.
The next generation of buildings will see the Internet-of-Things enable buildings to provide a personal experience, as their systems react to our individual tastes and requirements. Thanks to increasingly adept and fast networks, the IoT technology buzzword is becoming tangible in the built environment, whether it is in the existing structure in which you are sitting, or the one being built across the street.

Day in the Life of a Tenant in a Smart Building
While on a conference call, you drive into the building and the CCTV camera in the parking garage scans your licence plate.The gate opens to let you in (no waving a pass you may have forgotten, no pulling your wallet out). You are guided, via ceiling mounted green lights, to an electric car charging station (you registered
as an EV driver), where the charger is free as a building sustainability amenity.
You tell the elevator what floor you are travelling to and the building directs you, and others with similar destinations, to one elevator to reduce travel time. You stay on your call through the parking garage and elevator (no dropped call), and while enroute tap your phone on the access control reader (no more access cards!) to obtain access to your tenant floor. You head to an open concept desk and transfer your call to the land line where you are automatically added to the video conference. While on that call you feel uncomfortably warm, and pull out the building’s mobile app to tell the system you are too warm. Within minutes, the temperature in your zone drops one degree.
Once that call wraps up a colleague asks about a project you’ve been working on, and so you grab an available audio privacy room. As you walk in, the lights turn on to your preferred setting (dimmer than the rest of the office), the video conference unit connects to your phone and you use it to share a draft presentation you’ve been collaborating on. You finish that discussion and manually turn the light level back to normal through the building app, as your colleague wants to show you a new design they have sketched out on the whiteboard.
Andy Schonberger, P.Eng, MBA, LEED AP, CEM, is head of business development and smart and connected real estate with Cisco Systems Canada in Toronto. He helps businesses to evolve and deliver next-generation buildings.