ASHRAE has issued a guide to help engineers design an energy efficient technology that can both heat and cool individual building zones. 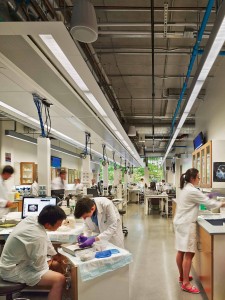 You’ve heard the pitch on chilled beam HVAC systems: ceiling plenum height, low sound, high comfort, no maintenance in the occupied space and outstanding energy performance.
For those building engineers who are not yet familiar with the technology, a great place to start is ASHRAE’s new Active and Passive Chilled Beam Application Design Guide. Published in February this year, the guide was written with the combined wisdom of ASHRAE members and REHVA (ASHRAE’s European counterpart).
When designing these systems, it all starts with the loads. Despite the name, active chilled beams can heat as well as cool (2 pipe or 4 pipe). The beams are sized to meet the zone sensible cooling and heating loads, while the other loads are managed by the primary air system.
Chilled beams come in two flavours: passive and active. Passive beams have only chilled water connections, are not connected to primary air, and can only cool air. Active beams are effectively “turbocharged” by primary air. The primary air passes through nozzles that induce room air to move through the water coil to be heated or cooled as required. Almost all projects use active beams because of their higher performance.
Active chilled beams require primary air from a dedicated outdoor air unit (DOAS) to operate. Sizing this unit takes a little work but is well covered in the ASHRAE design guide. The actual airflow must be the greater of:
• ventilation rate
• zone latent load
• zone sensible load
• ventilation load
The ventilation rate maintains acceptable indoor air quality and is based on ASHRAE Standard 62. An office ventilation rate is around 0.11 to 0.15 cfm/ft² while a classroom’s will be closer to 0.45 cfm/ft².
Latent Load
Understanding the latent load is where most engineers get wrapped around the axle. All chilled beams only provide sensible cooling — meaning they are not supposed to create any condensation. Most beams do not have drain pans. The good news is that there is no need for condensate piping (space and capital savings) and no filters to service (dry coils don’t need filters).
The space humidity load is met by providing primary air at a lower dewpoint than the design space condition (typically 75 °F and 50-55% RH).
The concern about condensation at the beam can lead the engineer to oversize the primary airflow, but this is a serious error. Oversized airflow rates will negate all the energy savings chilled beam systems can offer, and worse, lead to over cooling and occupant comfort complaints. For an office space with 5 to 8 gr/lb difference between the primary air and the space condition, the latent airflow requirement will be around 0.4 to 0.6 cfm/ft².
Sensible Load
The third requirement is based on meeting the zone sensible cooling load. The primary air itself will pick up about one third of the zone cooling load in an office application. There needs to be enough primary air to induce room air through the beam coil to deliver the other two thirds of cooling. An induction ratio (primary to induced air ratio) between 2 and 4 is common.
The building type will determine which of these three requirements will set the primary airflow. Offices and classrooms are driven by latent load, healthcare by ventilation, and hospitality by sensible loads. Once the zone sensible loads and primary airflow rates are established, the chilled beam design quickly falls into place.
The latest trend is to employ demand control ventilation and modulate the primary airflow rate based on occupancy, air quality and humidity. The building’s occupant comfort and energy usage are both greatly improved, but demand control ventilation is more complex to design and operate and slightly more expensive to install.
One final note about designing chilled beams: they are more than just the heating and cooling device; they are also the air distribution device. Beam performance details have all the same parameters (i.e. throw and sound data) you would expect with an air diffuser.
Guidelines
While every project is unique, here are some guidelines:
— the zone sensible cooling load is between 20 to 40 Btu/ft² average for building;
— the primary airflow rate should be 0.25 and 0.75 cfm/ft² with 0.4 to 0.6 cfm/ft² the most common;
— the primary air dewpoint depression is between 5 and 15 gr/lb.;
— induction ratio is between 1 to 4 (1 for a classroom or conference room and 3 for an office);
— chilled water supply temperature to beams is 57°F with a 4 to 6°F range;
— hot water supply temperature to beams is 120 to 140°F;
— beam static pressure drop is 0.4 to 0.6 inches water column;
— coil water pressure drops are typically less than 10 ft water column.
More information can be found at www.ashrae.org, www.revha.eu and from chilled beam manufacturers.cce
Hugh Crowther P.Eng. is vice-president of engineering at Swegon, in Mississauga, Ont. He has twice been a member of the ASHRAE Board of Directors and has chaired ASHRAE standards committees. E-mail hugh.crowther@swegon.com.