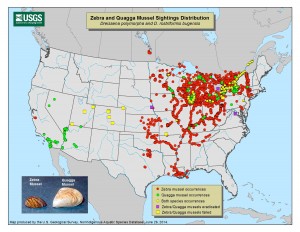 Despite efforts to keep zebra mussels at bay, the invasive species is now appearing in “significant numbers” on boats and docks in the south end of Lake Winnipeg.

In a CBC article on October 9, University of Winnipeg biologist said “It’s beyond the point now of being able to do anything at all about it.”

The muscles are in the Red River and have been seen at Manitoba Hydro’s Selkirk generating station and at the St. Andrews lock and dam. Manitoba Conservation has found them as far north as near Matheson Island, in the Hecla area and south of Grindstone Point.

However, the Minister of Conservation and Water Stewardship, Tom Nevakshonoff, says he believes that the problem is not “past the point of no return,” though fixing it will not be easy. He said it could cost the province $138 million to turn back the clock. The province has been aggressively encouraging boaters to clean their boats when transporting them and has installed decontamination units.

The problem of zebra mussels is not just the fouling, but the fact that they are filter feeders, depriving other organisms of the plankton and other organisms they need to survive. The mussels reproduce quickly and form thick layers.

Last year the province attempted to eliminate the mussels by dumping tonnes of liquid potash into the lake. This proved to be just a temporary and localized remedy.

Pip said the best the province can do now is to keep the creatures from spreading to other waterways.

Zebra mussels are also found throughout all the Great Lakes, Lake St. Clair and the Mississippi river watershed. Their fellow invasive species, quagga mussels, are limited to the southern Great Lakes, but have also been found the St. Lawrence River and north to Quebec City. For more information, see Ontario’s Invasive Species Program website, click here.

To read the CBC article of October 9, click here.