The flood protection project will take approximately seven years to complete and is shovel-ready. 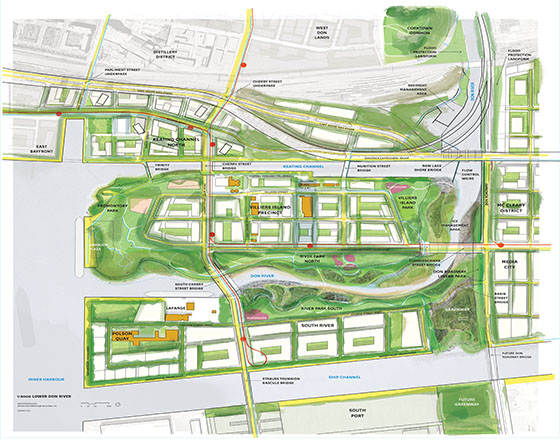 Waterfront Toronto, a corporation funded by three levels of government (feds, province and city), has received $1.25 billion in shared funding from all levels in support of the Port Lands Flood Protection Project, which will protect the Port Lands and build the necessary infrastructure to unlock the area’s potential for new neighbourhoods and employment areas.

Working together for more than a decade, Waterfront Toronto, the Toronto and Region Conservation Authority (TRCA) and the City of Toronto have developed a solution to protect the Port Lands and adjacent areas from damage associated with a major flood, to remediate the area’s contaminated soil, and to adapt the area to the impacts of climate change.

The Port Lands Flood Protection Project will create two new outlets for the Don River – including a wide river valley – that will convey flood waters into Lake Ontario, as well as provide new parks, aquatic habitat and infrastructure such as roads, bridges and a transit right-of-way.

“As more and more Canadians become city-dwellers, we need places where we can put our toes in the water and connect with this country’s natural beauty,” said Waterfront Toronto CEO Will Fleissig in a release. “Flood protecting the Port Lands presents us with a remarkable opportunity to imagine and create beautiful, sustainable and prosperous communities on the doorstep of downtown Toronto and on the waterfront we all share.”

The Protection Project will take approximately seven years to complete, and is shovel-ready, having completed numerous studies and approvals, including two environmental assessments.

The study also indicates that there are economic benefits related to future development unlocked by the project, including approximately:

With funding in place, Waterfront Toronto is positioned to begin detailed project design, with construction beginning later in 2017 and excavation of the river valley starting in early 2019.