Thousands of geese die after landing in copper mine leftovers 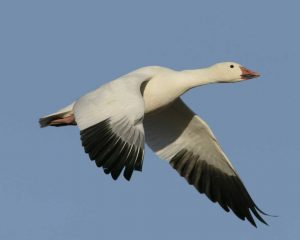 An estimated 10,000 snow geese plunged into a toxic tailings pond in Montana at the end of November.

The geese were flying south and according to one theory could have been avoiding a storm when they diverted over the Berkeley Pit in Butte, Montana and landed on the pond. Over 900 feet deep and 700 acres across, the lakewater is contaminated with arsenic, cadmium, cobalt, copper,  iron, zinc and other inorganic compounds, leftovers from the former copper mine’s operations between 1955 and 1982. Montana Resources jointly manages the pit with the Atlantic Richfield Company.

The company’s officials frantically tried to warn the birds away from the pond using spotlights, shotguns and speakers that emit noise and predator cries, but failed. Because death is not instant the death toll of birds is not certain yet, but aerial flights and drones suggest it is in the thousands.

Two decades ago in 1995, 235 snow geese were found dead in the pond. The company initially said they had eaten tainted corn, but autopsies later confirmed that the birds’ throats and intestines were burned.  The water in the pond at that time was said to be “acidic enough to liquefy a motorboat’s steel propeller.”

The company told Montana Resources that they will seek added deterrents, such as unmanned aircraft, to try to avoid future problems.

Related Stories
B.C. refuses to give environmental approval to gold and copper mine
GENIVAR project to remediate copper mine in Gaspe Region wins top 2011 Canadian Consulting Engineering Award
Quebec mine breach nets largest fine ever
Experts give warning on copper