The Term 1 site care, maintenance and design work at the NWT mine site begins immediately and lasts until March 31, 2020 at a cost of up to $32 million, to be followed by Term 2, the implementation of the overall remediation plan. 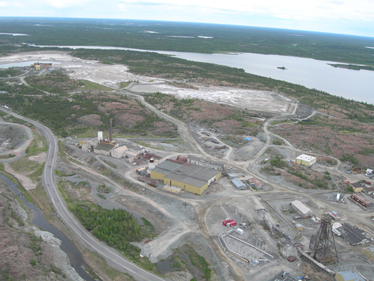 The federal government has awarded the Giant Mine site’s main construction manager contract to Parsons.

Giant Mine is an abandoned gold mine within Yellowknife, NWT’s city boundaries. It operated from 1948 until 1999. The former owner, Royal Oak Mines, entered receivership in 1999 and the Ontario Supreme Court transferred the property to Indigenous and Northern Affairs Canada (INAC) [now called Crown-Indigenous Relations and Northern Affairs Canada].

As the main construction manager, Parsons will provide construction management services to the Giant Mine remediation project team over two terms. In 2004 it was decided that the best way to treat 237,000 tonnes of toxic dust in the mine is to freeze it and store it in-situ underground.

Work completed in Term 1 will centre around responsibility for site care and maintenance and emerging risks on site, as well as supporting planning efforts for the full remediation in Term 2.

The Term  1 work begins immediately and will be undertaken until March 31, 2020 at a cost of up to $32 million (the cost estimate of Term 2 will be determined following design work undertaken in Term 1).

In Term 2, set to begin in 2020, Parsons Inc. will oversee the implementation of the overall remediation plan and associated activities.

“Today’s announcement is an important step toward building a new legacy for the site, one that reflects the input of the communities, protects the environment, and creates economic growth and opportunities for the North and Indigenous peoples,” said Carolyn Bennett, M.P., Minister of Crown-Indigenous Relations and Northern Affairs in a media release making the announcement.

“I am pleased to see progress being made to remediate the Giant Mine Site in Yellowknife and satisfied that the federal government has structured the contract to allow for the fullest economic participation of Indigenous and northern businesses in supporting the work of Parsons Canada,” added Robert C. McLeod, Minister of Environment and Natural Resources, Government of the Northwest Territories, in the release.

Since 2000, SRK Consulting Inc. and SENES Consultants Ltd. (part of Arcadis) have been the lead technical advisors to Aboriginal Affairs and Northern Development Canada on the Giant Mine Remediation Project as a whole, and particularly the management of arsenic trioxide waste.

Early phases of the Giant Mine Remediation project have been recognized with Canadian Consulting Engineering Awards of Excellence in recent years. At the 2015 Awards, Golder Associates was honoured for its work to help stabilize underground openings at the site, as some portions of the underground mine posed a risk of collapse which could lead to physical danger  to workers and the public as well as surface water infiltrating the contaminated underground workings.

The decontamination of the roaster complex project at the Giant Mine site received an Award of Excellence at the 2016 Canadian Consulting Engineering Awards, with AECOM and sub-consultant Golder Associates recognized for their work. The companies’ work included a detailed hazardous material survey and waste audit; preparing contract specifications; and complete resident engineering during decontamination and deconstruction of the roaster complex.