Plans to move mouth of Don River in Toronto inch ahead

Fresh on the wave of recent flooding, Torontonians at a public meeting held July 24 wanted to be reassured that the plans to change the course of the Don River where it discharges into Lake Ontario would not leave the city even more vulnerable... 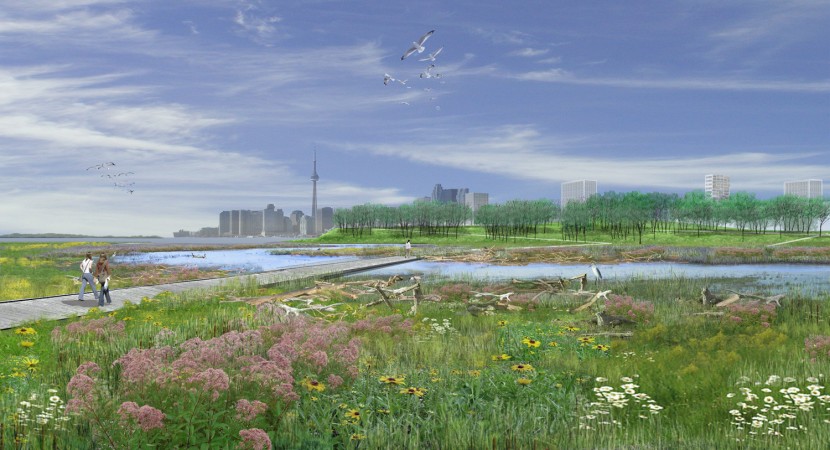 Fresh on the wave of recent flooding, Torontonians at a public meeting held July 24 wanted to be reassured that the plans to change the course of the Don River where it discharges into Lake Ontario would not leave the city even more vulnerable to extreme downpours.

The meeting was held by the city, Waterfront Toronto, and the Toronto and Region Conservation Authority (TRCA) as part of the environmental assessment processes for the Don Mouth Naturalization and Port Lands Flood Protection Project, and the accompanying Lower Don Lands Master Plan.

The projects will see a rundown, sparsely occupied industrial area in the docklands east of downtown transformed and primed for lucrative waterfront developments. The agencies hope to have the EA completed by this fall, and passed by next year.

This redevelopment around the Don River mouth is just one part of the massive revitalization of the city’s waterfront, but from an engineering point of view it is one of the most intriguing. It involves than just a brownfield clean-up: the plans are to actually construct a new river valley through the industrial lands.

Currently the Don River flows into Lake Ontario via a man-made “straitjacket” of concrete dockwalls out through the Keating Channel just south of Lakeshore Boulevard and the Gardiner Expressway. The revitalization plans, which have been over 20 years in the making, will see the river diverted through a new greenway 200 metres wide. Not only will this 30 hectare green space provide parks, wetlands and new aquatic habit, but it will also function as an important flood relief system, protecting residential lands to the east. The plans were recently simplified to speed the project along, and as it stands now the river valley will wind south from the Keating Channel then turn west through the middle of the industrial lands to release into the lake. Another branch of the greenway/floodway goes directly south, providing an outlet into the Ship Cannel. According to material handed out at the meeting, the new river mouth “must convey up to 1,700 m3/s of flood water into Lake Ontario.

The public attending the meeting were assured that the project is being designed to cope with a much bigger flooding event than had happened two weeks before when Toronto saw 100 mm of rain fall on July 8. During that storm the Don Valley Parkway — one of the biggest arteries in the city that runs beside the Don River — was one of the worst flooded areas, prompting people at the meeting to question whether that upstream flooding situation had been made worse by the new land berms that have already been constructed as part of other waterfront developments.

Staff from the TRCA assured the attendees that in order to win approval their designs have to ensure they will not worsen any flooding situation. They pointed out that the Don Valley Parkway (constructed in the 1960s) had been knowingly built in a floodplain, and that “the Don River will continue to flood. This scheme won’t make it worse or better…. there’s not much we can do.”

Apparently at least one developer is anxious to start work on developing sites, although there is no government funding in place yet. Everything hinges on the environmental assessment being approved.

There are numerous other elements to the plans, including the raising of several new bridges (for example, one over the Keating Channel at Cherry Street) as well as light rapid transit south along Cherry Street, and eventually another LRT line east-west along Commissioners Street. The two precincts to be developed first — Cousins and Polson Quay — have to be raised by 1 to 2 metres at grade, and there are other new landforms on the First Gulf Site (former Lever Brothers site), and the raising of “valley walls” along the east side of the new greenway where it runs alongside a road.

One suggestion during the public meeting was that the plans should include measures to protect wildlife from wandering onto the road — a point that was readily accepted by the design team. Any contaminated soils along the waterfront can be treated on site, so it’s anticipated that the excavations will produce the material for the new landforms.

Several consultants are working with Waterfront Toronto and TRCA on the plans for this area. They include AECOM, Michael Van Valkenburgh Associates, MMM, Senses, Baird and Limnotech.