A funicular—a glass-enclosed elevator-like rail car that travels along the slope—accommodates bikes, trailers, strollers, wheelchairs and mobility scooters; it can fit up to 20 people. 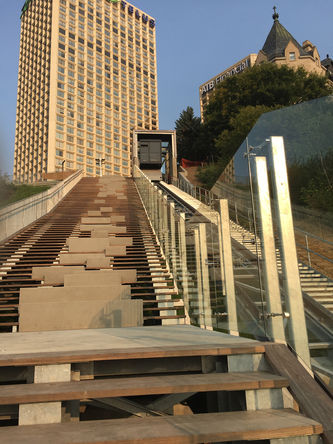 The City of Edmonton hosted the grand opening of its Mechanized River Valley Access on December 9, a project that creates an accessible connection from Edmonton’s downtown to its scenic River Valley trail network.

“The Mechanized River Valley Access creates a unique space from which to experience our beautiful River Valley and an opportunity for those of all abilities to access and enjoy our city’s greatest asset,” said Don Iveson, Mayor of Edmonton, in a media release. “We celebrate the opening by officially naming the facility the 100 Street Funicular. The bridge lookout will hereby be known as the Frederick G. Todd Lookout, named after the 20th Century landscape architect who envisioned Edmonton’s River Valley parks system.”

Designed by DIALOG, work on the project involved building a staircase from 100 Street to the Low Level Bridge area of the trail below. An adjacent funicular accommodates bikes, trailers, strollers and specialized equipment like wheelchairs and mobility scooters; it fits up to 20 people. The funicular uses energy to get  up the hill and generates electricity on the way down.

There is a promenade halfway down and a grassy rest area featuring functional art.

There is also a new pedestrian bridge, providing safe passage across Grierson Hill Road, with a 20m-high lookout over the North Saskatchewan River named after Frederick G. Todd, a landscape architect who proposed a River Valley park system in the early 1900s.

The $24 million project budget was funded by the River Valley Alliance supported by the provincial and federal governments, and the City of Edmonton.